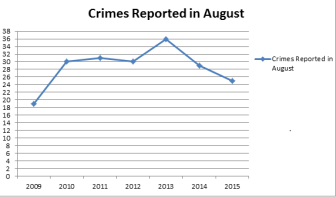 print
It’s been a few weeks into the new school year, and crime rates at TCU are lower than expected.

A total of 25 crimes were logged by the TCU Police Department in August of 2015, ranging from public intoxication, to fighting, to stolen bicycles.

This number is actually much lower than anticipated, given the increase in enrollment.

“There normally tends to be more crime with a bigger population on campus,” said TCU Police Lt. Ramiro Abad.

“We expect the rates will go up because we have a bigger influx of people,” Abad said. “Whenever you have that increase, the potential for certain things to happen increases drastically, and that’s with any populace.”

The total number of crimes logged in the month of August were the lowest they’ve been since 2009, and 16 percent lower than the average from 2010 to 2014, according to the crime log.

TCU has been growing steadily in student body size for the past couple of decades.

In the fall of 2000, the Frogs set a new school record with a fall enrollment of 7,775, according to the TCU Office of Institutional Research.

Ten years later, the enrollment number increased by more than a thousand, totaling 9,142, and since then it’s increased at an average of about 200 students per year.

The fall 2014 enrollment is listed at 10,033, according to the Office of Institutional Research.  But with that growth came an increase in student misconduct, as well as some notable drug arrests, according to TCU police.

Enrollment for fall 2015 has not yet been released.

Calls to the TCU Police Department drop this semester