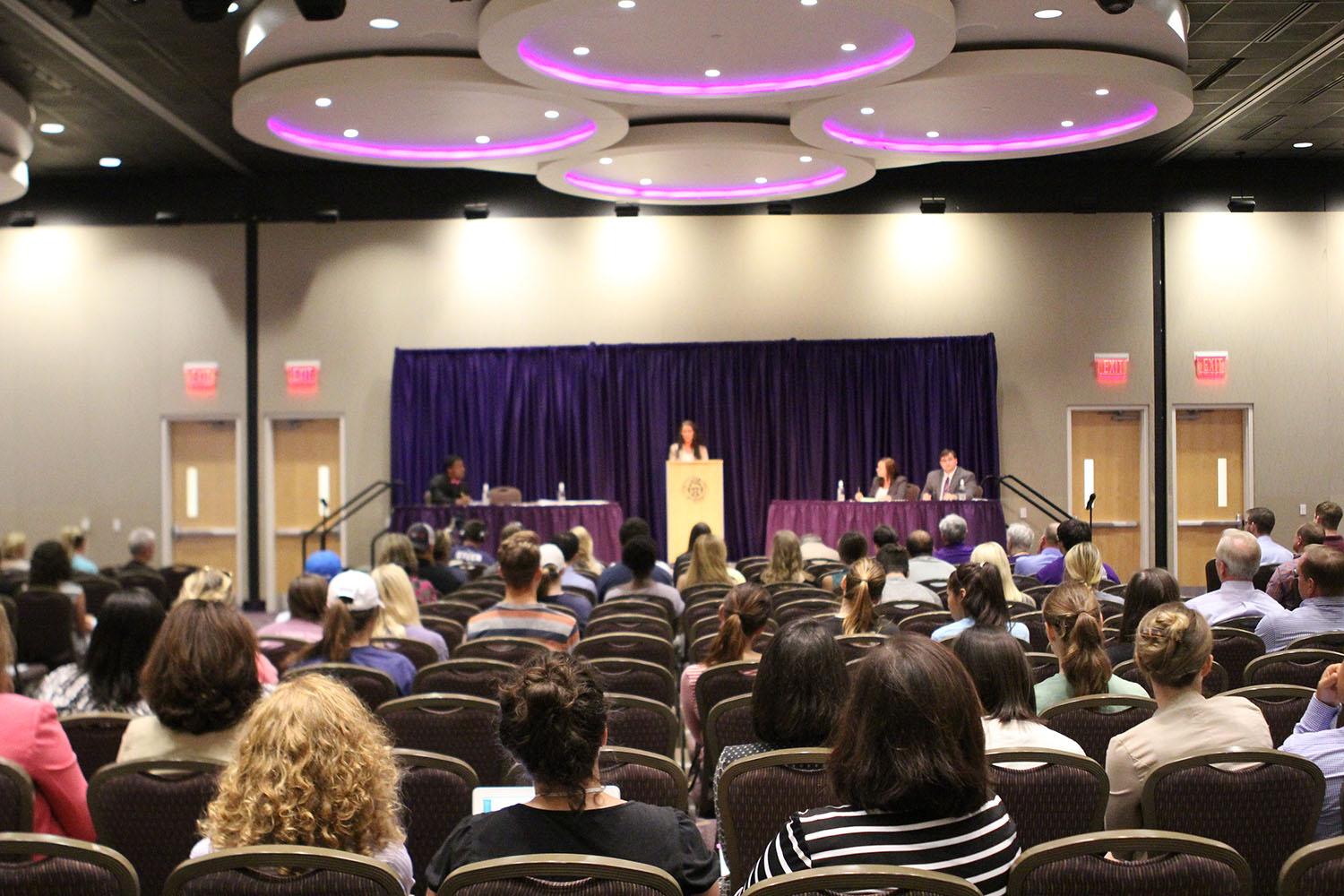 By Nov. 14 the TCU community will know if concealed handguns may be carried on campus.

The TCU Board of Trustees is set to make the final decision about campus carry during its meetings on Nov. 11-14.

Chancellor Victor Boschini said he will use the discussions that have been held on campus to make his recommendation to the board.

“I have heard plenty of conversation about it all around campus both in the formal planned forums and sessions and just in general,” Boschini said. “I think it is definitely on the minds of folks around here.”

Gov. Greg Abbott signed Senate Bill 11 June 13. The law, which goes into effect Aug. 1, 2016, allows anyone with a concealed handgun license to carry a weapon on public and private college campuses. Universities can designate areas where weapons are allowed and private universities can opt-out altogether.

“We are pleased that the final version of this bill preserved the opt-out discretion for our private colleges and universities – which are situated on private property,” Boschini said in an email on June 3.

The TCU Forensics team hosted a debate over campus carry Sept. 10 in the BLUU ballroom. Team members Shelby Whitson and Donald Griffin argued on behalf of opting in and Erika Simonson and Timothy Betts countered that TCU should opt out.

Simonson said she thought that both sides presented their arguments well, but the debate could not cover all the ins and outs of the legislation.

“The debate was good at getting some of the general ideas out there, but I think it would be best if students read the bill itself,” Simonson said.

While Simonson said that many people have misconceptions about firearms, she still thinks it is important for students to be vocal about their thoughts.

“I think everyone should voice their opinions that way TCU can make the best decisions for the students,” Simonson said.

The Student Government Association also had discussions about campus carry. The university charged SGA to make a resolution that reflected student opinion.

SGA polled students before proposing the resolution. Of those who responded, 74 percent of undergraduates voted for TCU to opt-out.

“I thought the campus carry resolution process went smoothly, largely because of the time and energy we put into gathering student opinion beforehand,” Student Body President Maddie Reddick said. “By the end of the process there was no question in my mind, and also it seems the minds of the representatives, that the majority of students are in favor of opting out.”

The House unanimously passed a resolution Oct. 13 recommending that TCU opt-out. This resolution will be presented to the Board of Trustees when they make their decision.

The Graduate Student Senate was also asked to provide a recommendation.

The GSS emailed the bill to graduate students and offered them the chance to voice their opinions either in a Oct. 7 Senate meeting or by emailing [email protected]

Graduate Student Body President Jackie Hoermann said they are working on compiling all the emails to send to Vice Chancellor for Student Affairs Kathy Cavins-Tull.

Hoermann said they have received an overwhelming number of opinions opposed to campus carry.  Concerns  range from mental stability and PTSD to the threat of a possible brain drain if students and professors feel uncomfortable on TCU’s campus.

“We’re primarily concerned with how this affects the learning environment for our students,” Hoermann said.

The Senate is planning on passing a formal resolution to be presented to the Board of Trustees next week.

The TCU Faculty Senate voted Oct. 1 in favor of a resolution urging TCU to opt-out in a 40-3 vote with two abstaining.

The faculty senate discussed the law at its Sept. 3 meeting and it surveyed faculty members.

“Everything was done in a very good and civilized manner,” Michaelides said.

In addition to the faculty senate meeting, about 30 faculty and staff met Sept. 23 during an open forum about campus carry. The lunchtime discussion offered faculty the chance to anonymously voice their opinions.

Alternative safety options, such as panic buttons or GPS for Froggie Five-0, were also discussed at the forum.

The Staff Assembly held a discussion on campus carry Oct. 6 and the members were also encouraged to attend campus meetings and the Sept. 10 debate, Staff Assembly President Jay Iorizzo said.

“Staff Assembly at TCU handled the issue of campus carry with outstanding professionalism, mutual respect, and openness to learning about the Legislature,” Iorizzo said.

In addition to the various discussions hosted by groups on campus, the University set up the email [email protected] where members of the TCU community could voice their opinions. Cavins-Tull said that she has received about 200 written comments to the email.

“I have read every one of them and they have been very thoughtful,” Cavins-Tull said. “The campus community has impressed me with its ability to discuss and debate this very important issue in a civil and collegial way. It has been a good representation of the ideals of an educational community.”

The chancellor’s cabinet will take these written responses, the formal resolutions and debates into consideration as it prepares a resolution for the Board of Trustees.

In addition to the issue of campus carry, Cavins-Tull said the debates led to an even larger discussion about safety at TCU.

“Without a doubt, we all agree on the importance of safety, community and academic freedom for our university,” Cavins-Tull said. “We have some differing views of how to maintain those ideals in the context of the campus carry law.  It is a complicated issue that has required all of us to consider campus safety as much more than a simple issue of guns.”