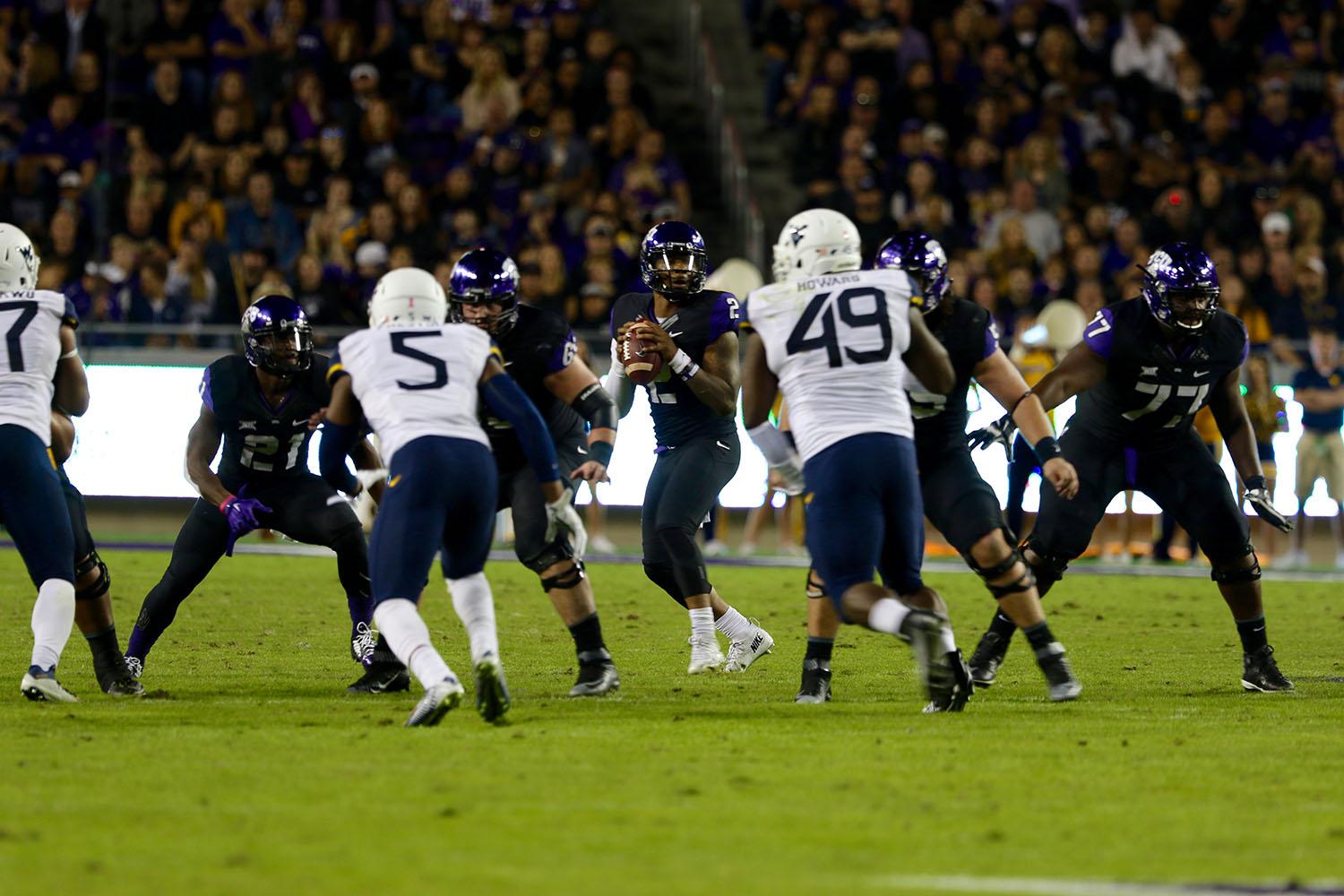 print
The No.5 Horned Frogs made a statement Thursday night by taking down the West Virginia Mountaineers 40-10 in front of a crowd of 45,947 decked out in black.

It’s not just the TCU community that has been showing appreciation for either of the two.

West Virginia head coach Dana Holgorsen gave Boykin a high-five after a play in which Boykin escaped a sack and dodged several defenders to pick up a first down before being run out of bounds.

The Boykin and Doctson duo has continually been one of the biggest story lines of the season for the Frogs and the college football world.

“This kid [Boykin] is just unbelievable,” Doctson said. “On the field and off the field he is all around a great guy and an amazing athlete.”

“He makes my job 10 times easier,” Boykin said. “When you have a guy running over people making catches like that, he’s one of the best players in college football.”

Doctson said he feels as if chemistry is at an all time high both between him and Boykin, and for the entire offense.

“It’s our second year on the offense and we have a feel for it now,” Doctson said. “We also have a lot of freshmen who are stepping up. It shows how this offense is made for us because they go into it and it’s natural and effortless for them too.”

The Frogs’ offense got off to a quick start, opening up the scoring on their first drive of the game when Boykin found Doctson for a 17 yard touchdown pass to take a 7-0 lead.

The Frogs ended the first quarter with a 17-0 lead over the Mountaineers, thanks to a Trevone Boykin rushing touchdown a 20 yard Jaden Oberkrom field goal.

West Virginia cut the lead to 17-10 in the 2nd quarter after a Shelton Gibson touchdown and a field goal shortly after.But the Frogs walked into halftime with a 23-10 lead after Oberkrom executed two more field goals.

In the second half it was all TCU.

The Frogs outscored the Mountaineers 17-0 over the final two quarters, leading to the 40-10 victory that propelled the Frogs to 8-0 on the season.

While the offense shined, the Frogs’ defense also recorded one of their better performances of the season.

After lackluster performances in the last two games, the unit came out strong, shutting out the Mountaineers in the first quarter before allowing all 10 points in the second.

The Frogs shut out the Mountaineers in the second half the game. It was the second straight game in which the Frogs had done so against their opponent.

“I don’t know he caught that interception one handed,” Patterson said.

Patterson said he is overall pleased with how his defense has progressed in recent games.

“The two Big 12 games we’ve had at home we held Texas and West Virginia to low point totals,” Patterson said. “We still have two more big games on the road so we are going to work on our “road defense” on Sunday.”

The win was much needed for the Frogs.

The College Football Playoff committee will release their inaugural rankings of the season in the coming week and the polls were not friendly to the Frogs last weekend.

TCU fell from No. 4 to No. 5 despite being on a bye. Patterson said that he is honored to even be near the top of the food chain.

“For me, two, three, four, or five is better than 123 other ones,” Patterson said. “If I was to stay at five for the rest of my career at TCU I’d be happy, but that’s pretty hard to do because there are a lot of other good football teams out there.”

The Frogs get back to action next Saturday when they travel to Stillwater, Oklahoma to face the Oklahoma State University Cowboys. Kickoff is set for 2:30 p.m.