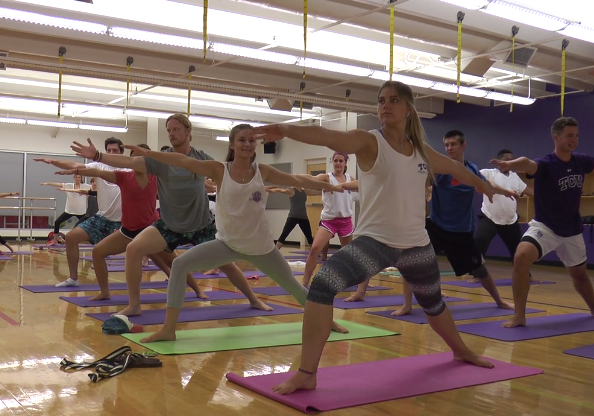 He lifted his feet higher into the air—and tumbled.

John David Walker IV, a junior geology major, and other members of the yoga club filled the room as they practiced headstands and other yoga poses during practice of Texas Christian University’s largest sports club.

Despite only being on campus three semesters, TCU’s yoga club has 177 members.

“Yes, we are a sports club,” club president Alexis Schrepple said, laughing. “It’s an awesome community. There are people from a lot of different backgrounds.”

While joining too many organizations can be stressful, many students said that joining this club brought them peace.

“I have such a crazy week almost every week, and I just wanted something to, like, let go of all my stress and to look forward to each week,” said Emily Ingram, a sophomore fashion merchandising and business double major.

A different teacher leads each class. Schrepple said this is to introduce club members to many types of yoga.

Carah Ronan, one of the yoga instructors, said there are many types of yoga.

“There is a little bit of something for everyone,” she said. “You hear from a lot of people that ‘I can’t do yoga because I’m not flexible,’ which is the exact reason you should do yoga.”

Despite having 177 members in the club, no one has been turned away from a class yet.

“Different people have different schedules,” Schrepple said. “We’ve been really lucky these past three weeks – we’ve had space. But we’re thinking of expanding to two days [a week] if the numbers just keep growing.”

The club meets every Wednesday at 8 p.m. in the University Recreation Center.