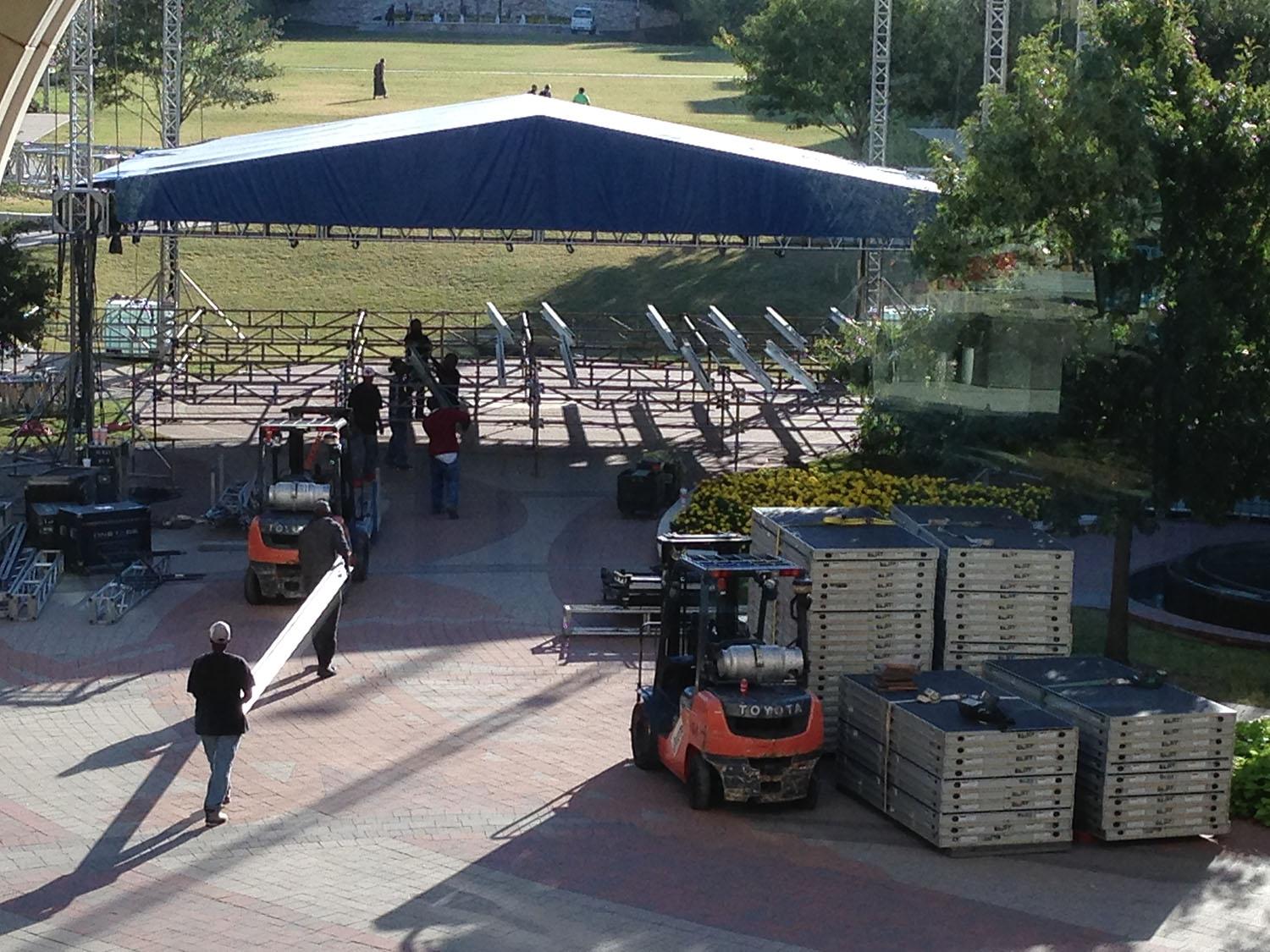 print
More than 100 student volunteers are preparing this week for the Hunter Hayes concert in the campus commons on Friday sponsored by the Student Government Association (SGA).

The four gates will open at 7 p.m. The opening act, Ryan Lafferty, will go on at 8 p.m., and Hayes will go on after him, probably around 9 p.m., SGA Vice President of Operations Ryker Thompson said.

Students will need their IDs to swipe into the concert. Every student can also bring in one non-TCU guest.

Thompson said the event is one of the biggest things to happen on campus this semester, other than the Baylor game. He even has a countdown of hours left until the concert outside his office.

Preparations for the concert have been going on since it was announced in August; however, SGA Vice President of External Affairs Katie Phillips said efforts have really picked up in recent weeks.

“This past two weeks we’ve really been trying to market his show again and build up excitement for it,” Phillips said.

These marketing efforts have included hanging a banner on the Brown-Lupton University Union patio advertising the concert, emailing students through the [email protected] email and using SGA social media to post some of Hayes’ music videos.

SGA volunteers also went shopping Wednesday in order to get all the items Hayes requested for his backstage area.

“Nothing out of the ordinary,” Phillips said. “Just food and snacks that he will need because he’ll be here. It’s for his crew and everybody, so compared to what we’ve done in the past, it’s been very normal. Nothing crazy.”

Hayes is expected to be in the SGA pit, which will serve as the backstage area, for most of the day Friday because of sound checks, Thompson said.

“I don’t know exactly what his plans are before the concert, but I wouldn’t be surprised if you see him walking around campus or something,” Thompson said.

SGA and theEnd volunteers have also signed up to work different shifts Friday that range from 10 a.m. to 11 p.m. The first shift includes setting up barricades around the commons and helping the band unload their equipment from the bus. The next shift includes managing the sound checks and making sure students aren’t bothering or recording the band.

“It’s for the artist’s protection and just for the respect of the artist,” theEnd graduate assistant Kelly Lee said.

Student volunteers will also help swipe students in at the concert, sell merchandise at the four merchandise tables and provide crowd control during the concert.

“Essentially they are just people who roam around in the crowd to make sure everything is going okay,” Lee said. “They’re all really good people, and they are there because they want to help the TCU community.”

The last shift of volunteers will help load the band’s equipment back into the bus, take down barricades and clean up any trash left in the commons.

“We have to make sure the commons look nice because if the commons doesn’t look nice, then we can’t do these shows,” Lee said.

Ngoc Tu, a sophomore business information systems and computer information technology double major, is one of the students who volunteered for the cleanup crew. Tu said he wanted to volunteer again this year after seeing the trash left after the Jason Derulo concert last year.

“After the concert, the commons were trashed,” Tu said. “There was just so much gibberish on the ground and this is a beautiful campus, and I don’t want to see it in that state. So I want to help in bringing back the beauty of TCU.”

“I really like helping out everyone on campus,” Tesch said. “If I can contribute to the greater good of an event on campus that brings everyone together, then it’s worth it. I don’t have a problem helping out and giving up my time if it makes people happy.”