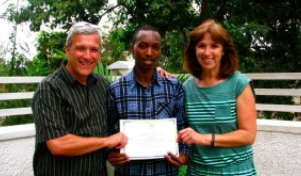 print
A wink and a thumbs-up were exchanged between a student and a speaker before the talk began. The exchange was one of understanding.

Yannick Tona, the Rwandan student who called guest speaker Carl Wilkens “his George Washington,” understood that this talk would be hard, but was one that was needed.

Wilkens spoke on Oct. 8 in the Brown-Lupton University Union Ballroom about the forgiveness of those who committed the Rwandan genocide.

The Rwandan genocide began on April 7, 1994, and lasted approximately 100 days. Up to one million civilian Rwandans were killed by forces such as Rwandan army officials and the National Police.

Wilkens said he stayed in Rwanda during the genocide because he wasn’t allowed to bring Rwandans out of the country.

“How could I have said we have an evacuation plan in place when we didn’t have a plan for our Rwandan neighbors?” Wilkens said. “The government said we couldn’t bring any Rwandans with us.”

Wilkens has returned back to Rwanda several times, bringing students back with him. The students were able to speak to the people who carried out the genocide.

“They’d ask questions like, ‘Why’d you do it?’” Wilkens said. “That’s a blunt question, but they were looking for an honest answer.”

Wilkens then questioned what is needed in order to facilitate forgiveness to someone who admitted to killing people because they were told to.

“[The Rwandans] would go back to the prison on Fridays with a bar of soap or a piece of fruit,” Wilkens said. “That fruit speaks volumes to me because it says, ‘I accept your confession.’ We’re all human; it’s a very human place. But there are superhuman things happening there.”

Wilkens is also the namesake of the Carl and Teresa Wilkens Award, which allows one Rwandan student per academic year to come to TCU. The requirements are that the student spend one year in the Intensive English Program before deciding what to do next. Most enter TCU as an undergraduate.