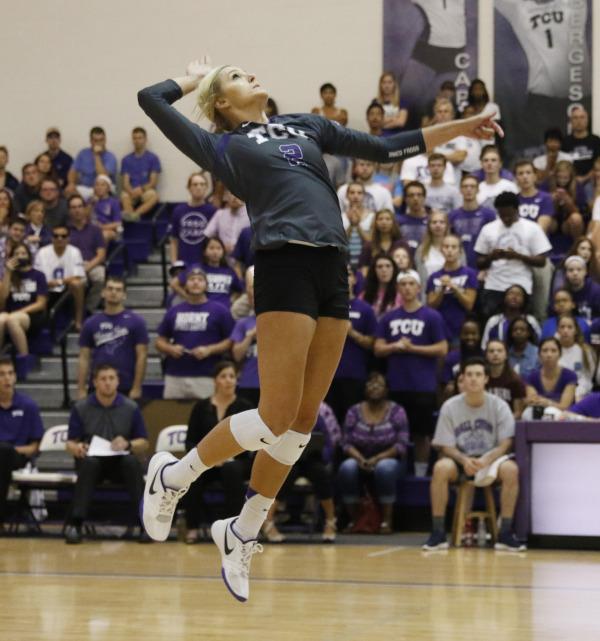 print
TCU Volleyball (12-4, 2-2) is on its first win streak since mid-September. They will look to keep that streak alive this Wednesday at 8 p.m. against the University of Oklahoma (7-8, 1-2).

McGuire is second on the team with 116 kills in 55 sets played. McGuire leads the team in blocks with 84, averaging 1.53 blocks per set, good for seventh in the NCAA and first in the Big 12.

TCU ranks first in the Big 12 with 2.76 blocks per set, but ranks significantly lower in the other major statistical categories as a team.

The Sooners are looking to start a winning streak after beating Baylor University 3-1 in Norman. The Sooner victory ended a three-game losing streak.

Oklahoma ranks fourth in the Big 12 in blocks and hitting percentage.

TCU is 4-1 at home this season and was 13-3 last season. OU is 3-4 on the road this season. TCU is a much different team while playing at the University Recreation Center than when they play on the road.

Given TCU’s blocking ability and how the team plays at home, the Frogs should be the ones who prevail in this match.

Kevin is a senior sports broadcasting major from Rockton, Illinois. He covers club sports for TCU360.