TCU 360All TCU. All the time.
62 F
Fort Worth
Facebook
Instagram
Twitter
TCU 360All TCU. All the time.
Campus News Academics Speech pathology majors get hands-on experience at Miller Clinic
Facebook
Twitter
Linkedin
ReddIt
print
TCU speech pathology majors in the Harris College of Nursing and Health Sciences are getting hands-on training in another area of the medical field: audiology.

At the Miller Speech and Hearing Clinic, located on the corner of Stadium Drive and West Cantey Street, six speech pathology students under the direction of Tracy Burger, an assistant professor of professional practice in the Harris College, are administering hearing exams to members of the Fort Worth community.

Speech pathology and audiology may not seem to be linked at first glance, but Burger said the two fields interact closely with each other.

“Hearing is so related with talking and communicating because you have to make sure that the message is received,” Burger said. “Audiology is a sister field with speech pathology.”

To grasp a better understanding of the work the clinic performs, take the screening performed Tuesday by Burger and senior Shannon Howard on a patient. All those involved agreed to let TCU360 observe the screening.

Ella Pate, a bright-eyed and blonde-haired two-year old girl, walked into the Miller Clinic with her mother, Meagan Newsome, on Tuesday, Nov. 3.

Newsome was concerned about her daughter’s hearing and said Ella sometimes seemed to have problems listening. Burger and Howard proceeded to get Ella’s full patient history, from previous doctor visits to current allergies.

Howard peered into Ella’s ears and performed a litany of diagnostic tests, each designed to gauge how the toddler’s eardrums were reacting to stimuli.

The task seems simple enough to an outsider, but on a toddler, administering the tests can be a challenge. Even with Ella, who was remarkably well-behaved, Howard had to practice her skills at managing patients, something she said is simply part of the learning experience.

“I’ve had two kids so far, and one older adult, a stroke patient,” Howard said. “A lot of times, it’s like ‘this is the [hearing] test, and this is what it does,’ and that’s easy to memorize for a test, but it’s completely different to do on a real-life client.”

For a typical patient, Howard and Burger would both leave the soundproof screening room and head over to a neighboring room with a viewing area to allow them to see the patient.

With Ella, Howard stayed behind to keep the toddler focused, and Burger administered the test from the neighboring room.

The test is designed to gauge the frequencies and decibel levels a person can hear in each ear. On an adult patient, this is done with a recorded series of beeps and other sounds.

For Ella, Burger and Howard had to improvise. They encouraged Ella to throw an object in the direction of a duck located on her left or a hamster located on her right, depending on where the sound came from.

Burger alternated between playing white noise at different frequencies and volumes through a speaker and giving vocal commands to Ella in order to elicit a response.

This allowed Burger and Howard to determine Ella’s baseline hearing thresholds. “What we have,” Burger said, “is some information about her listening skills. Overall, she has pretty good access.”

The screening process allows the administrators to produce a diagnostic chart, called an “audiometric record,” that gives a comprehensive report on the patient’s hearing thresholds. 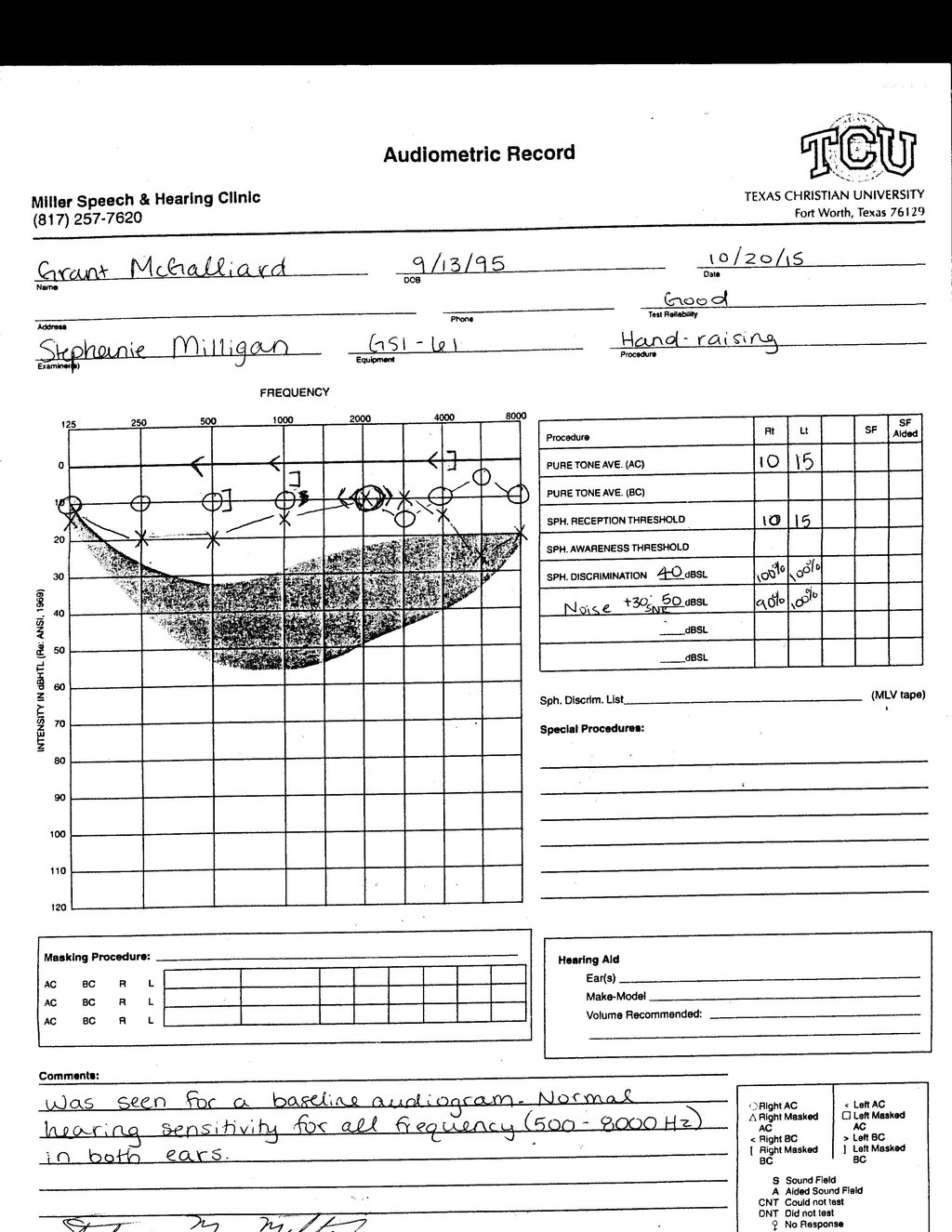 Howard and Burger sent Newsome and Ella on their way after a ten-minute debrief on the results of the hearing. Ella had no major problems beyond some fluid in her left ear causing a minor hearing loss, and she got a sticker for her good behavior during the test.

For Howard, the screening reminded her of her own childhood experience with speech therapy, which is why she entered the speech pathology major.

“When I was younger, I was pulled out of my classroom a lot for speech therapy,” Howard said. “I remember being pulled out, and I know what that feels like.”

“When I came to TCU, I didn’t come as a ‘speech path’ major. I kind of found my way here through my advisor,” Howard said. “When I realized that that’s what I did as a kid, and I started seeing clients, I felt really connected to it, because I understand what it feels like to be the client.”

Burger said the six students in the program, which is the highest number she’s had in her five years at TCU, are generally focused on two main career paths.

“They’re usually students who think they want to be an audiologist, and they use this practicum to try it on for size,” Burger said.

The other students are speech pathology majors who want to work with people with speaking disorders.

“Speech therapists who want to specialize in oral rehabilitation are focusing on speech pathology with an emphasis on ‘learning to listen,'” Burger said. “They have a great foundation for them to understand auditory access.”

How audiology affects you

College students often take part in activities that can damage their hearing.

Burger and Howard both cautioned against the dangers of listening to music through headphones too loudly.

“It’s really easy to have [music] really loud when you get in the zone studying or working out, and you just don’t realize how loud it is,” Howard said. “You sometimes kind of tone it out.”

Burger said students should try to use over-ear headphones instead of the earbuds, like those that come with iPhones and iPods.

“Those [iPod earbuds] are little tiny speakers that are really close to your eardrum, and the closer something is to your eardrum, the louder it’s going to be,” Burger said. “You may not see the effects of it right now, but as students get older, you can see them losing their high-frequency hearing because of the noise exposure.”

Burger also said to follow the “60 and 60” rule, which dictates that the volume level for music should be set no higher than 60 percent, and after 60 continuous minutes of listening, students should take a break from using headphones.

“Take them off, and take a break,” Burger said. “If your neighbors, or someone standing next to you, can hear what you’re listening to, you may want to consider turning it down.”