A group of TCU students in the Student Filmmakers Association are taking time out of their schedules to shoot and produce a short film.

The current film the students have been working on, “The Garden Sense,” is about a mailman who has feelings for a married woman to whom he regularly delivers mail and with whom he goes to church. The irony is that the woman is not faithful to her religion, and she brings the mailman into a situation involving her husband.

Writer and director Danny Legittino said the film’s original name was going to be “An Abundance of Evil” due to its “twisted” storyline.

“My goal when I make a movie is I want people when they leave the theater or wherever they are watching [the film] to think, ‘What did I just watch?’” Legittino said.

“The cinematography of it is really pretty,” editor Brad Lowe said. “There will be quick cutting. It will be fun to cut it together and to create [a] sense of urgency in the film.”

The SFA is comprised of amateur students who have an interest in making movies.

Assistant director Ariana Milligan said students from any major can get involved with the organization.

“I joined to develop relationships with people that share the same passion to create things that I have,” Milligan said. “It’s a very diverse group of people.”

Production designer Chandler McGovern said those involved in the organization learn all aspects of filming.

“We learn about the process of making a film,” McGovern said, “from preproduction, to filming and to postproduction.”

“It’s like a big family,” Legittino said. “You’d be surprised after three days of shooting of how close you get with everybody.”

Legittino said “The Garden Sense” and three other short films shot in the fall semester will debut in April 2016 at the BLUU Auditorium.

The Student Filmmakers Association meets every Thursday at 5 p.m. in Moudy North. 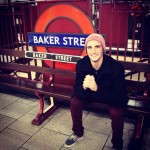