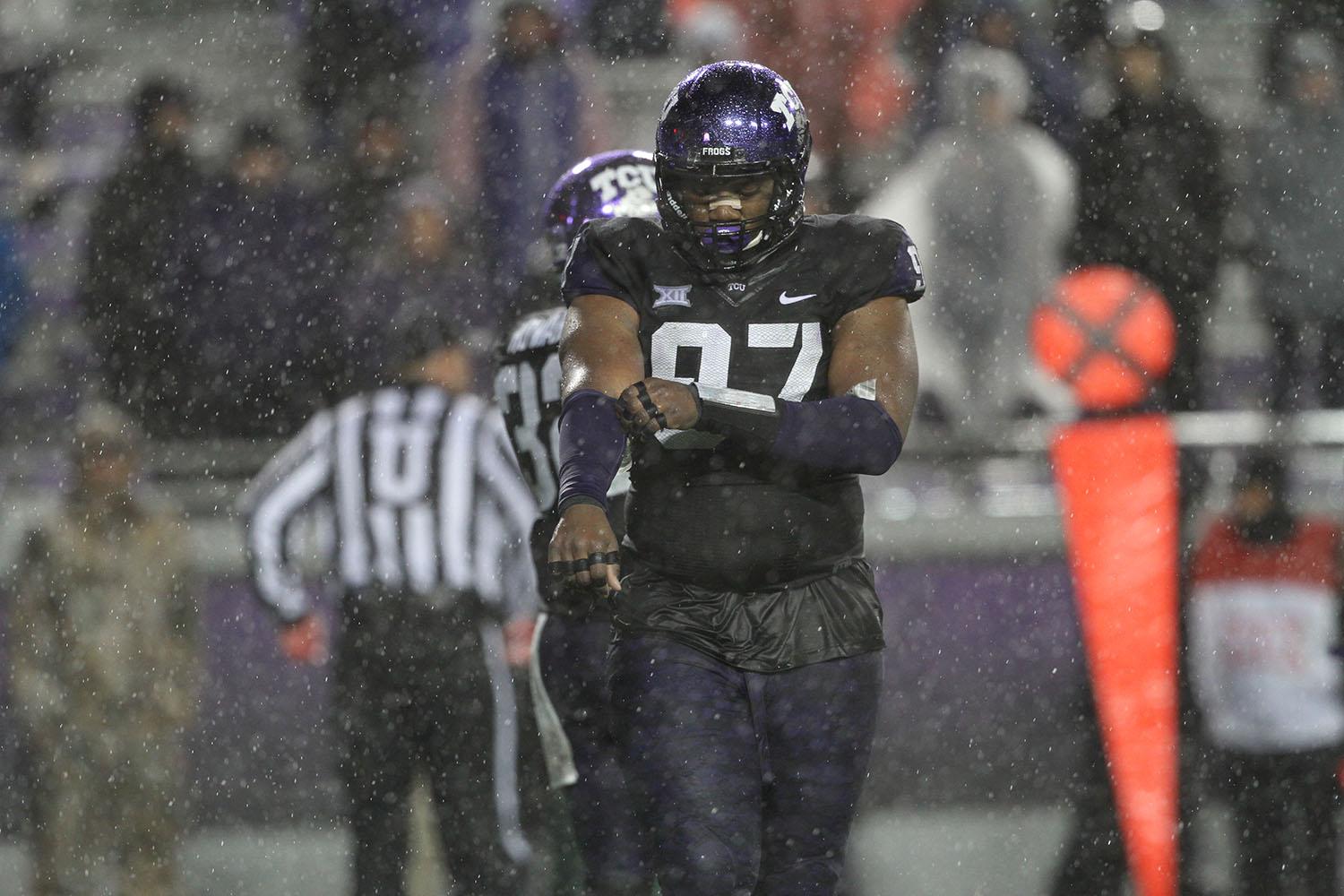 print
It was the perfect ending to a perfect rivalry game in a perfect storm.

Rain drenched the Carter. Fans rushed the field. And No. 19 TCU got its long awaited revenge over No. 7 Baylor, knocking off the Bears 28-21 in a double-overtime classic.

The Frogs waited a long 13 months to get a crack at downing their I-35 and Big 12 rivals – a wait even further prolonged by a 50 minute lighting delay prior to kickoff. At the end of the night though, the 36 degree weather and torrential downpours were not enough to stop the Frogs from emerging victorious in the “Revivalry” for the first time in three years.

After suffering so many injuries in 2015, it was the Frogs’ defense who had its shining moment. Ty Summers made the tackle to stop the Bears on 4th and 1 to seal the deal for TCU in a water-logged Black Friday affair, crushing Baylor’s hopes of a conference title and national championship.

“What will stick out is not the ballgame tonight, but the players who played in it,” TCU head coach Gary Patterson said.

Give the players [and Patterson] credit not just for Friday night’s effort, but everything they have accomplished this year. The Frogs suffered over 20 critical injuries to starters this Fall. They played 30 freshmen. They lost their best wide receiver in Josh Doctson for their final two, and toughest, games of the season.

Through all the obstacles the Frogs faced, they found a way to be relevant all season long, the mark of a team with a resilient core of players and a special coaching staff.

“It’s been an amazing year for this team after everything they have gone through,” Patterson said. “You just go down the list of everything we had happen it’s just outstanding. It’s been a real building success story with everyone doing what they needed to do, and nobody lost faith in what was really going on.”

The Frogs may not be walking away with a Big 12 Conference title or a berth to the College Football Playoff, but they stayed in the picture through all the adversity they experienced.

They began the season 8-0. They were a swatted pass away from defeating Oklahoma last weekend as a 17.5 point underdog, without starting quarterback Trevone Boykin. And they ended the season knocking off a top 10 team to give the program it’s tenth 10-win season under head coach Gary Patterson, and the third in the past five seasons.

“It’s hard in a five year span to have that many double-digit win seasons. You don’t get that opportunity very often,” Patterson said. “It’s hard today no matter who you play.”

For the TCU seniors such as Boykin, Doctson, tailback Aaron Green, and wide receiver Kolby Listenbee, they will get to leave behind a legacy of excellence, capped by a signature win over their biggest rival.

“All the adversity we’ve been through and to be able find this many wins is crazy,” Boykin. “The fight in this team is unbelievable.”

While it was Boykin and the Frogs’ offense that got all the hype leading up to and through the season, the ever-depleted defense shined when it mattered the most for the Frogs in Friday’s low scoring affair that featured a whopping 23 punts between both teams.

With the aid of wet weather, the Frogs’ defense held Baylor’s explosive offense to only 62 passing yards. They held wide receiver and Heisman Trophy candidate Corey Coleman to just one catch on the night. They shut out the Bears offense in the second half. And they only surrendered 21 points, the fewest points Baylor has scored in a game since 2013.

No stat may have been more impactful than the four turnovers the Frogs forced off fumbles, including one that Josh Carraway recovered and returned for a 56-yard touchdown to tie the game at 14. That touchdown was ultimately enough to send the game into overtime.

“They played unbelievable. This is one of the best games they had all year,” Boykin said. “It was a defensive game and Coach P had them well prepared and they showed up to play.”

As the Frogs enter a month of preparations for their next bowl game, they will ride the emotional high and momentum of an upset over a rival. Their bowl destination will be important, and it’s still to be determined. But at this point, the journey matters more than the destination, and the Frogs should be praised for their resiliency in finishing 2015 with a 10-2 regular season record.