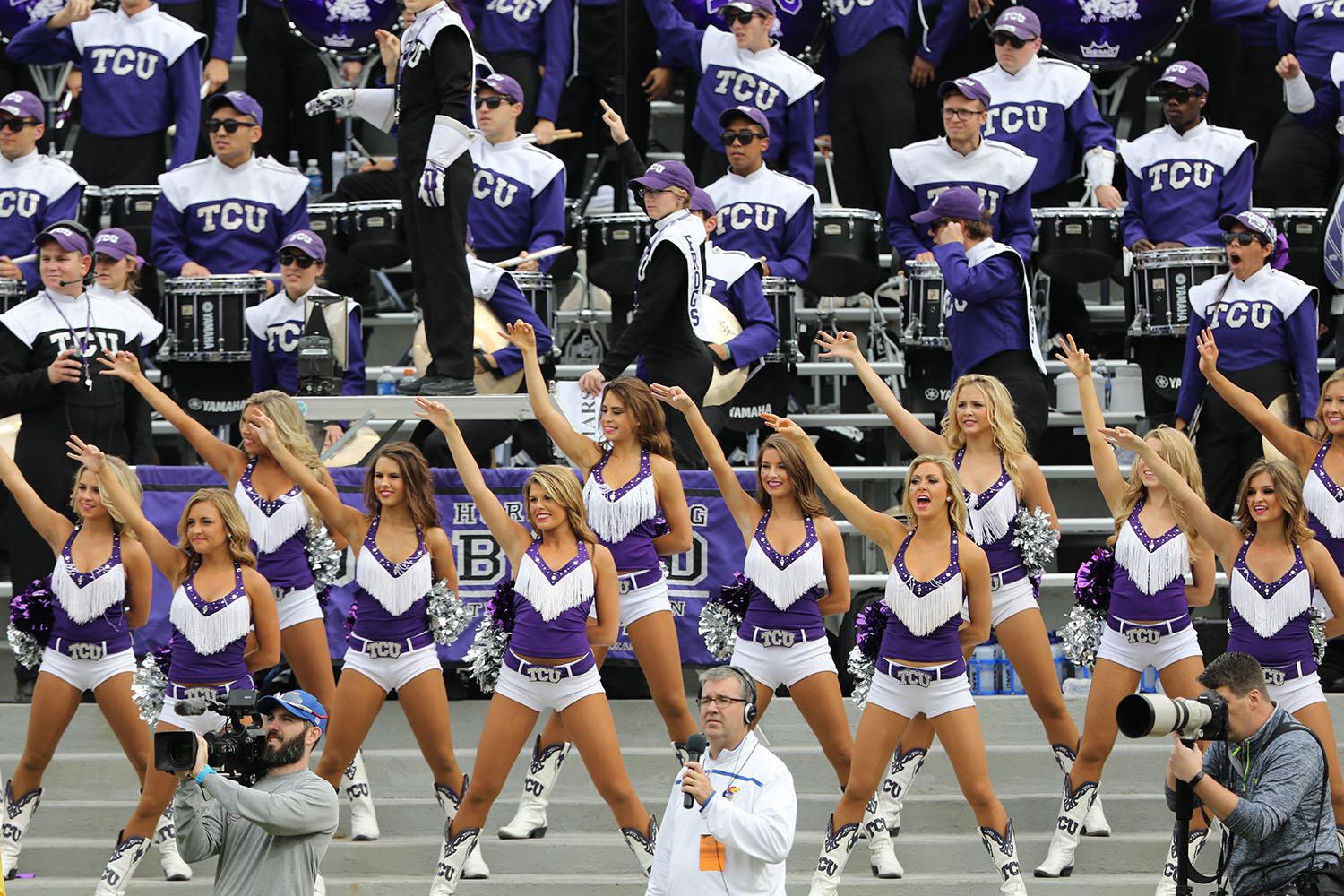 print
The TCU showgirls squad features 28 members who perform on the sidelines at sporting events, but senior captain Destiny Boos said it is more than just members on a team dancing together.

It is young women who are making the best of their experiences by remembering why they love and value the opportunity to be a showgirl, she said.

Boos, one of three captains on the squad and the team’s only senior member, said she has learned a lot from her experiences as a showgirl.

Life of a showgirl

Boos started dancing when she was just two years old. It is that love of performing and dancing that has gotten her to where she is today, she said.

Boos said performing on game day is one of her favorite parts of being a showgirl. The fan atmosphere and being actively involved in game day is incredible, she said.

For the showgirls, game day starts four hours before kick-off. They get to the field, stretch and make sure everything is ready before running through pregame with the band. Then, they change and go through their halftime performance. After they watch the band practice, they practice their third quarter routine with music, Boos said.

Being on the field is a good time to make sure all the little things are in place, like practicing with the yard lines, figuring out spacing on the field and running through routines with the loudspeaker system to make sure it all works, she said. It’s the mechanical aspects to make sure everything is ready that are the most important on gameday, Boos said.

During the game, the team performs both a halftime and third quarter routine, but also stands on the steps by the student section to cheer on the Horned Frogs.

“Then, the game is over and we do it all again next week.” Boos said.

Game days are a lot of performing and intense work, but it’s worth it, she said.

“It’s the feeling of doing the alma mater and seeing all the fans looking down on everyone on the field,” Boos said. “You feel very honored to be at TCU and to be a showgirl.”

Life outside of showgirls

Other than being on showgirls, Boos also has a required internship for her social work major. She works 16 hours through the internship, takes 12 hours of classes, and leads practices as one of the captains for showgirls.

She said being on showgirls has taught her how to be aware of time commitments, how to organize and how to be a communicator. She takes her days one at a time, then her weeks one at a time.

More than just time commitments, being a leader on a team has taught her the importance of making sure each team member feels valued and that they are important, she said.

“We love having them on the team,” Boos said.

Being the only senior on the team and one of three captains, Boos takes on the role of guiding the team.

Boos said even with a diverse mix of personalities and a big group of girls, they get along well. She said no one else at TCU has the experience of dancing together like they do, so it’s something they all hold close to them.

She shares advice with them on how to make sure they aren’t getting too wrapped up in the perks and the beauty aspects of the program. It’s easy to compare yourself to others and beat yourself down, she said.

“I try to encourage them to hold onto why they do it specifically and individually.” Boos said.

She tells them that their experiences are not dependent on how the year is. She reminds them to make the best of their own experiences and cherish the friendships and memories that come, she said.

Boos will ask them: “When you perform, what do you want TCU to see from you?”

She said by putting it in that perspective, the showgirls discover so much about themselves.

“I can look back and say, ‘Wow I’ve grown so much from this program,’” Boos said. “I took away so much from it: dancing for a school that I love so much.”