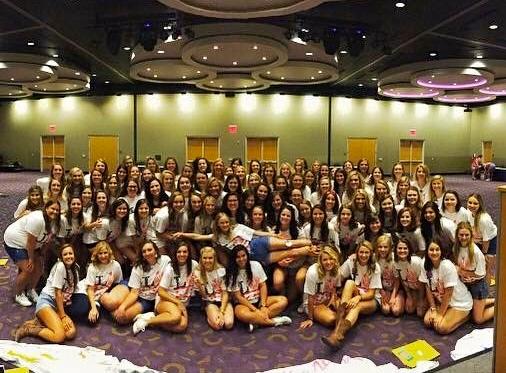 print
TCU Panhellenic Council officials plan to decrease the number of Rho Gammas for 2016 sorority recruitment to increase the efficiency and the prestige of the position.

Those involved in TCU sorority recruitment, such as Murray, have noticed that not all Rho Gammas were constantly busy throughout recruitment. By cutting down the number of Rho Gammas, Panhellenic hopes to be able to better delegate tasks.

“It will make the [sorority recruitment] process more efficient so everyone is doing something and not just sitting around,” Murray said. “There were always two people doing one job and that’s just kind of unnecessary.”

The 2015 vice president of recruitment programming Justine Grace said she agrees that Rho Gammas were not constantly busy in the past.

“There were moments where I felt like I might have been wasting their time,” Grace said. “I think some people view Rho Gamma as an easy way out of recruitment.”

“I think they might need to add Rho Gammas,” said Riley Downing, a 2015 Rho Gamma. “It was really hard to even connect with all of [the potential new members].”

Many women who have gone through recruitment, such as TCU junior Nicole Schouten, remember their Rho Gamma as a positive influence in the recruitment process.

“My Rho Gamma was really positive, and she was always there when I wanted to talk after visiting a sorority,” Schouten said.

Increasing the prestige of the position is important because Rho Gammas are often the first impression women get of TCU, Grace said.

“We want people to recognize this as a leadership opportunity,” Grace said.

Other changes in the process include requiring each TCU Panhellenic chapter to have seven percent of their chapter apply to be a 2016 Rho Gamma. Additionally, applicants will go through group interviews rather than individual interviews.