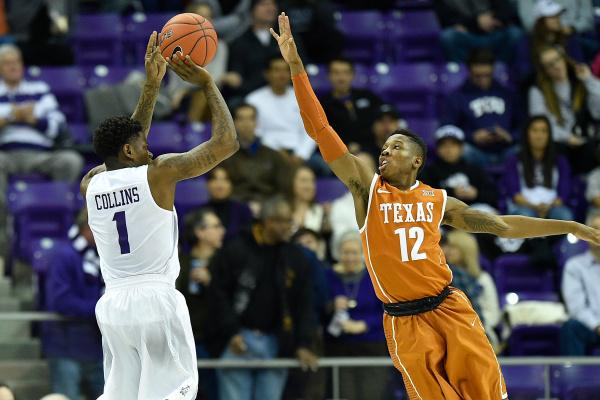 print
TCU almost gave the game away at the free-throw line Saturday night, missing four free-throws in the final minute, but the Frogs stifled Texas on the Longhorns’ final possession to preserve a one-point lead in a 58-57 victory.

TCU ended its 11-game losing streak against Texas, with their last win against the Longhorns coming on Jan. 10th, 1995, in Fort Worth.

“We made it tough on ourselves, and we tried in every way possible to give the game back to Texas,” TCU head coach Trent Johnson said.

The game began in an unusual manner with the Longhorns being hit with a technical foul because of a scorebook error — a Texas assistant coach listed senior guard Demarcus Holland in the starting lineup when Holland was actually in Tyler, Texas for his grandmother’s funeral.

TCU’s Chauncey Collins made a technical free-throw before the game began that proved to be the difference-maker in the back and forth contest, as the Frogs won by just a point.

Chris Washburn put TCU up on a deep mid-range jumper, 58-57, with 1:03 left in the game. After an Isaiah Taylor missed floater in the lane, the ball was knocked out of bounds by Texas, giving TCU the ball back with 25 seconds left.

Brandon Parrish was fouled twice on back-to-back Horned Frog possessions and proceeded to miss his next four free throw attempts leaving the door open for the Longhorns to take the lead.

“Brandon [Parrish] got tight at the free throw line, but it’s a good win for us,” Johnson said. “I can’t tell you what the kids have been through, they’ve been working so hard to get over the hump.”

“Down the stretch with a minute to go, we had a foul to give, so we wanted to be as aggressive as possible, so we double-teamed Taylor and Texas got a little frenetic.”

However, Trent only contributed three points on 1-4 shooting because he picked up two quick fouls in the first ten minutes of the game, and then picked up another quick one at the beginning of the second half, which left him sitting on the bench for the majority of the contest.

In Trent’s absence, junior guard Brandon Parrish turned in a career night from the three-point line, shooting 5-6 from downtown for a team-leading 15 points.

Horned Frogs junior forward Chris Washburn returned to the starting lineup, making his first start of the season, and he finished with an efficient 14 points on 5-9 shooting, in addition to 8 boards, 2 assists, and the game-clinching block.

“Chris [Washburn] was his normal self, which is good to see,”  Johnson said. “He helps us more on the defensive end, he’s a versatile four-man, who can guard bigs down low and smalls on the perimeter, we need him out there.”

However, the Frogs supplemented those free-throw struggles (54.2%) with solid three-point shooting (41.7% on 5-12 shooting).

TCU extended its record to 8-0 this season when out-rebounding its opponent, as they did Saturday against the Longhorns, 40-31.

The Frogs also improved to 41-8 when leading at halftime under head coach Trent Johnson.

TCU hits the road for the next contest in Waco against the Baylor Bears on Wednesday, Jan. 13th, at 7:15 p.m.