TCU 360All TCU. All the time.
84.2 F
Fort Worth
Facebook
Instagram
Twitter
TCU 360All TCU. All the time.
Campus News Academics Dean’s Teaching Award honors professors’ excellence in classroom
Facebook
Twitter
Linkedin
ReddIt
print
For the director of the TCU Executive MBA Program Suzanne Carter, it was an incredible honor to stand on stage as she was announced one winner of the Dean’s Teaching Award.

At the end of 2015 during Fall Commencement, Carter, along with social work professor James Petrovich and engineering professor Steve Weis, won the distinguished Dean’s Teaching Award– a recognition of teaching excellence given by the university.

Carter and Petrovich offer their reactions below. Phil Hartman, Dean of the College of Science and Engineering, serves on the selection committee for the award and gives his input on giving three professors the award each year.

Carter, also a professor of professional practice in strategy, has been at TCU for seven years. She said she was honored to be nominated for the award among other strong candidates from the Neeley School of Business.

“It was an amazing thing to think that I could be one of the people considered and would [eventually] win that award,” Carter said.

She said that she enjoys the latitude to teach what she is passionate about, as well as students’ willingness to learn as much as possible.

Petrovich said that as a professor, his job is to arrive in class ready to engage the students he teaches.

“The responsibility is on us to give [students] a return on their investment and make sure that they get the highest quality education,” Petrovich said.

The award originated in 1982 as the Burlington Northern Foundation Faculty Achievement Award.  It was formally known as the Dean’s Award for Distinguished Teaching and was given every two years, alternating with the Dean’s Awards for Research and Creativity.

Now the award is given annually.

Each college nominates one faculty member for each category. The AddRan College of Liberal Arts nominates two, one from humanities and one from social sciences.

At the end of November, the Provost Council, comprised of TCU deans, meets to vote on the three winners. After they meet, the award is presented during Fall Commencement. Each winner receives a $2,500 award.

More qualifications for the Dean’s Teaching Award can be found in the document below.

The Dean’s Teaching Award is given selectively. According to the chart below, only three full-time professors receive the award each year. 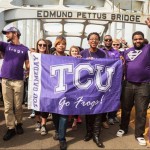