TCU 360All TCU. All the time.
65 F
Fort Worth
Facebook
Instagram
Twitter
TCU 360All TCU. All the time.
Sports Men's golf Men’s golf has strong showing
Facebook
Twitter
Linkedin
ReddIt
print
In the second tournament of the spring season, the Horned Frogs men’s golf team placed 4th in a field of 20 teams at the Wyoming Desert Intercollegiate tournament in Palm Desert, California.

Junior Chelso Barrett took 2nd place individually with a three-round score of 215. In the tournament, which took place Feb. 19-21, Barrett had his best round on the first day, shooting a 68, and finished on Sunday with a 69.

Senior Sarosh Adi also came in with a top 10 finish, placing 8th individually with a score of 215. Junior Giulio Castagnara, who competed as an individual, finished tied for 9th.

*Giulio Castagnara’s score did not factor into the team total as he competed as an individual.

TCU’s ten over par team score of 874 put them eight strokes behind Kansas who finished 1st at 866. The Frogs return to the course March 7-9 in the Southern Highlands Collegiate Masters in Las Vegas, Nevada. 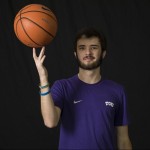