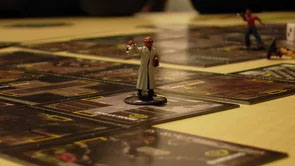 With two games happening simultaneously in one room, and a Nintendo tournament in another, members of the TCU Gamer’s Guild enjoy their weekly meetings.

Cards, board game pieces and video game controllers lay on tables, chairs and in the hands of Guild members as the meeting gets underway. The goal: to simply play games.

“It’s not a club you see all the time,” Gamer’s Guild president Connor Sprague said.

Throughout the guild’s 10 years, the culture of the club has evolved to shadow the trend of the gaming industry and the habits of the Millennial generation.

But he said the guild created an atmosphere where instead of playing alone in a dorm, members come together to play against people in the same room.

“People are there, we have fun, we joke with each other because we all have this common bond and interest, which is gaming,” Velasquez said.

Sprague said anyone is welcome at the Gamer’s Guild, which meets every Friday from 6 p.m. to midnight on the third floor of the Brown-Lupton University Union.