TCU 360All TCU. All the time.
84 F
Fort Worth
Facebook
Instagram
Twitter
TCU 360All TCU. All the time.
The 109 ZBonz dog park offers a tail-wagging good time
Facebook
Twitter
Linkedin
ReddIt
print
Dogs and dog lovers now have something else to wag their tails about.
ZBonz dog park, located off of Camp Bowie Boulevard, held its soft opening Jan. 30. The soft opening means that while construction is still going on in the park, residents can bring their dogs and utilize all of the new space.
“It went well,” project manager Scott Penn said. “I haven’t heard any negative feedback.”
The grand opening is tentatively set for April 9 as long as there are no more delays in construction.
The park has already had several delays such as waiting for state transportation permits, waiting for private funding to purchase materials and record-setting rain closing the site for a couple months. However, Penn said the only other delay he could see being a problem now is the weather.
The construction to finish the park will be ongoing during the weekdays; however, the park is still open both weekdays and weekends. Penn said he sees “10 to 15 cars” at the park during the week.
“Most of the stuff in the dog park will be built within the next few weeks,” Penn said.
However as the construction finishes, the Marketing Coordinator for the Park and Recreation Department, Whitney Rodriquez, said the park could be closed at any time depending on the work being done.
“Although we are eager for the park to get used, the safety of the public and their pets is our number one priority as we finish up this project,” Rodriguez said.

The 10-acre park is divided into two areas: one for dogs less than 40 pounds and one for dogs more than 40 pounds. Owners can put their smaller dogs in the big dog area if they want; however, according to the ZBonz park rules, this is not recommended. All dogs must be at least four months old, licensed with the city, and be up to date on their rabies shots.
Each side of the park is fully surrounded by a fence and features a pond, and an agility course and grassy areas for the dogs to run around. There are also benches for owners and trash cans for poop bags.
Fort Worth resident Delia Owens said her dog Rooster’s favorite part is the pond.
“The first thing he did was run and get in the pond,” Owens said. “He loves the pond.” 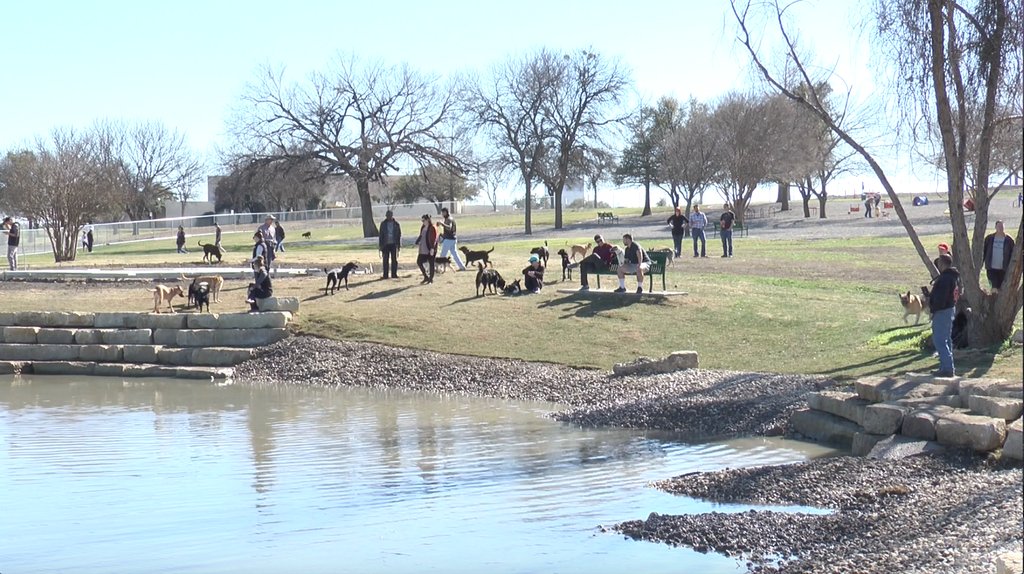 Daniel Villegas said that while his dogs Kinsler and Colt also love the water, drying them off isn’t always easy.
“I hope they get a dry-off area so when we’re done with the lake, we can gate them off so they don’t have access to the water anymore,” Villegas said.
While there are no plans currently to build a dry-off area, Penn said as long as donations keep coming in, they will continue to improve the park. He said one feature they are raising money for right now is lighting inside the dog park.
The park has already received $676,000 from the city, $510,000 in private donations and $470,000 in pro bono labor costs Penn said. During the grand opening ceremony April 9 a donor wall will be revealed featuring plaques with the names of donors.
“We’re looking forward to the opening,” Penn said. “We hope everyone enjoys it.”

Anyone who wants to donate money can contact Ryan Opgenorth at [email protected] or call 214-587-9404.
CORRECTION: This story has been updated to accurately reflect the parks size and amenities still under construction. A previous version of this article stated the parks size as 138-acres. The previous version also incorrectly stated that bathrooms would be constructed at the park.