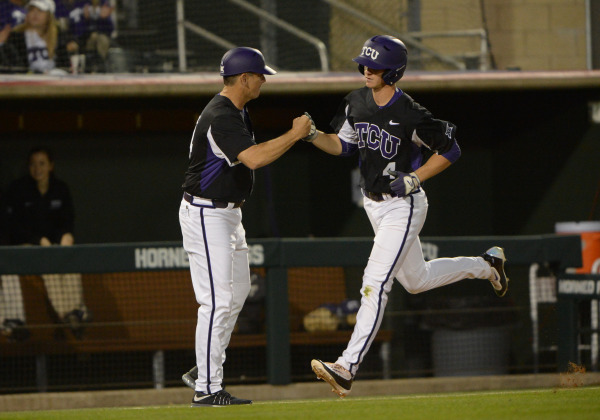 print
The University of Texas at Arlington Mavericks came into Fort Worth on Wednesday night to face off in a single game against the Horned Frogs. Mavericks starter Jake Wilcox held TCU scoreless through the first five innings en route to a 4-3 upset win.

The Mavericks took a 3-0 lead very early in the game, when catcher Brady Cox hit a three-run home run in the 3rd inning off of TCU’s Rex Hill. The game would stay at 3-0 until the 7th inning when Arlington added on a fourth run on a wild pitch.

It looked as if there was absolutely no hope for the Horned Frogs’ offense until the 8th inning, when second baseman Cam Warner hit a three-run homer to cut the UT Arlington lead to 4-3.

TCU was able to get the tying run on base in the bottom half of the 9th, but the Horned Frogs fell just short of completing the comeback. With a runner on first, the Mavericks got a double-play ball to earn the victory.

The Mavericks got the job done by using just two pitchers, starter Jake Wilcox and reliever Jacob Moreland, who came in for the last four innings of the game. TCU had six hits on the night, but it was just not enough to top UT-Arlington.

The loss snaps a five-game win streak for TCU, which included a 17-4 victory against the very same UT-Arlington team and a sweep of Wichita State.

The Horned Frogs will have a day off as they prepare for their weekend series on the road against the Kansas Jayhawks. TCU is now 22-5 on the season, with a 13-3 home record.