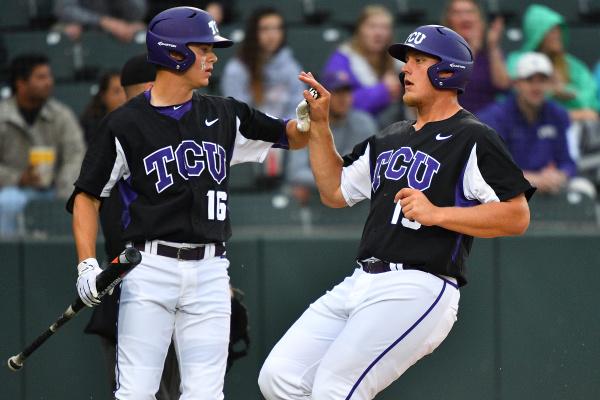 print
The Frogs dropped their second straight home game to Dallas Baptist on Tuesday night. The loss makes TCU 2-3 in their last five games at home.

In the bottom of the second, the Frogs earned an early lead on a double steal and an errant throw, but that was the last time the Frogs would be in control.

With the bases loaded in the fourth, Dallas Baptist tied the game as Rex Hill walked in a run. But he followed up by striking out two in a row, leaving Dallas Baptist unable to capitalize on the runners left on base.

Evan Skoug led off the fourth with a hit, followed by Luken Baker. Elliott Barzilli hit a hard ball into the gap, but the center fielder doubled up Skoug, who tried to tag up and advance to third.

In the seventh, the wheels fell off for the Frogs. Ryan Burnett walked the first batter then gave up an infield hit and a throwing error. Before being pulled, he hit two batters and gave up a three-run home run.

Preston Guillory replaced Burnett but didn’t fare much better. Guillory hit the first batter he faced then gave up a two-run double giving DBU a 6-1 lead. The next batter hit a three-run home run, extending the lead to 9-1.

The DBU seventh before that first out: four HBPs, two homers, a walk, wild pitch, error. Still a runner in scoring position, one out.

When the nightmare inning had come to a close, about half of the crowd at Lupton Stadium had left.

“If you don’t play well, you’re going to lose.” Schlossnagle said. “We didn’t play well, and we lost. It didn’t matter what the score was. We lost.”

TCU moved to 24-8 on the season and will look to get back on track against Oklahoma this weekend. First pitch on Friday is scheduled for 7 p.m. at Lupton Stadium.