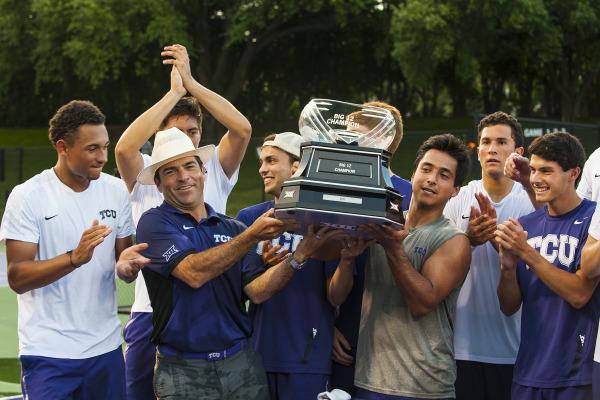 Not a single Horned Frog lost a set in the nine matches played. TCU head coach David Roditi said the victory would hold a place in Horned Frog tennis lore for quite some time.

“This is a special accomplishment for our program and for this group of guys,” Roditi said. “We have such a young team and I don’t think they even realize what they just accomplished.”

TCU had last won a regular season conference title in 2009, when they took home the Mountain West championship. The four wins in the Big 12 this season for the Frogs is a program record.

“I know some of our guys that just graduated realize how hard it is to win this conference in tennis and in any sport,” Roditi said. “This is just such a competitive conference and I am proud of that.”

In singles play, Johnson dropped just one game in a 61, 6-0 win over Tyler Stayer. Jerry Lopez dispatched Tommy Podvinsky 6-2, 6-1, and Rybakov sealed the rivalry win and the conference championship for the Frogs with a 6-2, 6-4 win over Max Tchoutakian.

“I felt like we competed really well tonight,” Roditi said. “We got out of some moments like being down 0-40 on our serves and we would come back and hold.”

“Anytime they were making a run at us, we just dug in deeper and deeper and were able to get out.”

TCU will travel to Lubbock to take on No. 9 Texas Tech on Sunday, April 24th to close out the regular season. If the Frogs lose, they’ll share the regular season title with the Red Raiders — if they win, they’ll be alone at the top.

Men’s tennis continues win streak with wins over No. 14 Ole Miss and No. 8 Stanford