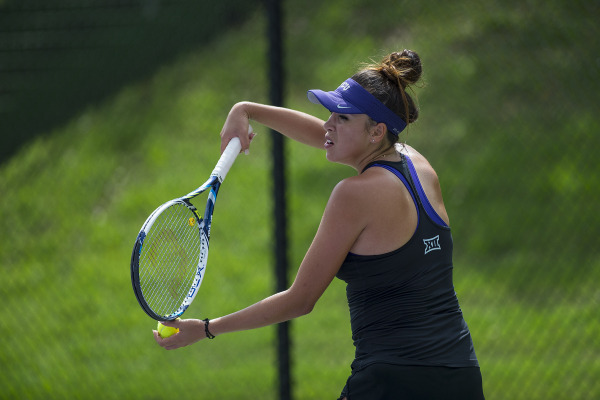 print
The TCU women’s tennis team looked to avoid its second straight loss on Sunday against Texas, but was unable to do so.

No. 28 TCU lost at home to No. 35 Texas 4-3. The loss marked the first time the Frogs dropped back-to-back matches all season.

The Frogs got off to a nice start on Sunday by handily winning the doubles point 6-2 and 6-1.

Aleksandra Zenovka earned the Frogs their second point with a 6-3, 6-0 win.

But Texas picked up three out of the next four matches to even the score up at 3-3. All eyes turned to court three, where TCU’s Seda Arantekin was locked in a battle with Danielle Wagland.

After dropping the first set 3-6, Arantekin fought back to win the second set 6-4. Fans and teammates cheered her on, but she was unable to complete the comeback and lost the third set 2-6.

The match marked the last for the Frogs at the Bayard H. Friedman Tennis Center. TCU has four matches this year, all on the road and against other Big 12 opponents.

The Big 12 championship takes place in Stillwater, Oklahoma on April 28.

The Frogs next match is on Friday at Oklahoma at 6 p.m. You can follow the action by following the team on Twitter @TCUWomensTennis.