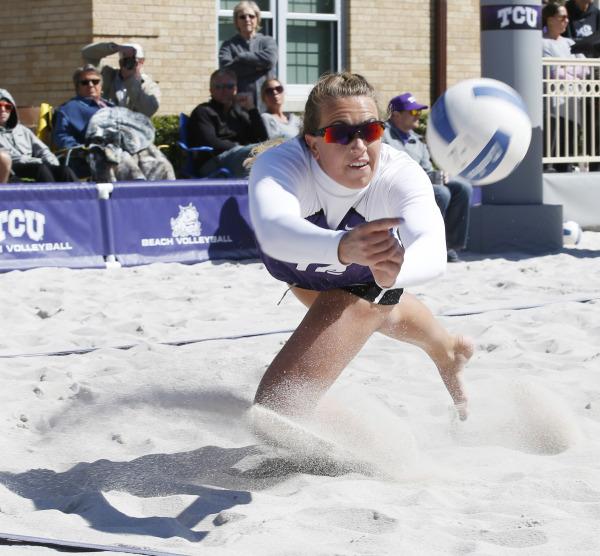 The TCU beach volleyball team wrapped up its final home match of the season with a loss to No. 1 USC Saturday afternoon.

The Frogs looked to carry the momentum from Friday after opening the tournament with two wins, including their 10th sweep. But, as USC took five of the six matches in straight sets, TCU ended its final home weekend with a 2-1 record.

The match on Saturday went for only three sets. USC took the opening set 21-12, but first-time duo Bridget Odmark and Clare Ford fought back to take the next set, 21-15. The Trojans got out to an early lead and never looked back as they won the final set 15-7.

Next up, the Frogs will wrap-up their season on the road in Baton Rouge as they compete in the Battle on the Bayou on April 30.

No. 6 TCU equestrian’s dream of reaching the NCEA finals came to an end Saturday night, falling to No. 1 Auburn.

Trailing 7-5 going into the final four riders of Reining, TCU appeared poised to knock off the nation’s top-ranked team. But, the Frogs were only able to claim a 2-1 decision in the discipline.

In Horsemanship, TCU dominated the Tigers to the tune of 3-1. In the end, TCU couldn’t solve the Tigers in Equitation on the Flat as Auburn swept the Frogs, 4-0.

Freshman Alex Rybakov clinched No. 2 TCU men’s tennis victory over No. 18 Texas on Saturday. Down 5-2 in the set, he came back and won five straight games to win the match 4-2.

Reese Stalder and Hudson Blake took the doubles point for the Frogs while No. 5 Cameron Norrie and Jerry Lopez won in individuals.

With this win, TCU has started league play 3-0 for the first time in program history and won two Big 12 road matches for the first time since joining the league in 2012. The victory also marks the team’s 10th win over an opponent ranked inside the Oracle/ITA top 20 this season.

The victory also marks the team’s 10th win over an opponent ranked inside the Oracle/ITA top 20 this season.

No. 33 TCU women’s tennis wrapped up its road trip in Oklahoma by dropping a 4-1 decision to No. 15 Oklahoma State Sunday afternoon. OSU remains the only undefeated team in the conference.

No. 27 ranked pair of Seda Arantekin and Caroline Wegner earned the only doubles win of the day as the pair picked up their 21st victory this season.

Sophomore Aleksandra Zenovka put the lone point on the board for the Frogs as she scored a 6-3, 6-4 win over Carla Tur Mari. The win evened up the match at 1-1 and earned Zenovka her third straight win this season and 22nd overall.

TCU will finish up the regular season next weekend by traveling to Morgantown, West Virgina to face the Mountaineers April 22.

Senior Ryan Books took his first individual victory in the tournament. Going into Sunday, Books was tied with Oregon State’s Kevin Murphy at even par at the end of regulation. Books won the tournament on the par 4-sixth hole.

The Frogs return to action for the Big 12 Conference Championships April 29.