TCU 360All TCU. All the time.
88.3 F
Fort Worth
Facebook
Instagram
Twitter
TCU 360All TCU. All the time.
Sports Baseball TCU and Paschal communities celebrate the life of incoming TCU baseball player
Facebook
Twitter
Linkedin
ReddIt
print
Both of the school communities on Berry Street, TCU and Paschal High School, came together Thursday night to celebrate the life of a 2016 Paschal graduate and incoming TCU baseball player.

Drew Medford died in a one-vehicle crash on the Chisholm Trail Parkway early on Thursday. The wreck occurred around 2:30, near the Interstate 20 exit, according to a statement from Texas Department of Public Safety and Texas Highway Patrol Staff Lieutenant Lonny Haschel.

Medford, who was set to pitch at TCU next season, was the MVP of District 4-6A, Paschal baseball head coach Darrell Preston said.

However, Medford was more than just an athlete, as friends, family, Horned Frogs and Panthers alike remembered Medford in a vigil on the Paschal practice football field around 5 p.m.

“He had one of the biggest hearts in the world,” Zach Shaw, one of Medford’s close friends from high school, said. “Drew Medford was the one of the most genuine, most kind, and caring people I have ever had the pleasure of encountering.”

Medford was known for his ability to make people smile. “He just made everybody laugh and was such a great guy to be around,” said Lauren Callaghan, an incoming TCU freshman.

Almost the entire practice football field was full, as it was nearly impossible to see the grass with so many people coming to pay their respects.

“This is amazing,” Preston said. “I look out here and all I see is nothing but love for Drew Medford, and I think its fitting that it’s raining, just like all the tears that are falling right now because he was such an unbelievable person.”

Despite the downpour, the entire crowd stayed throughout the entirety of the vigil. Medford’s friends and family displayed the traits he was most known for: his spirit.

“Drew Medford taught us something: how not to quit,” Preston said. “Drew Medford won, I see it looking at all of our faces, and he’s looking down at us today and always will be.”

“We have a strong community here at Paschal, and we don’t stay down, we get back up and keep pushing forward,” Matt Miracle said. “We all know that’s what Drew would want us to do.” 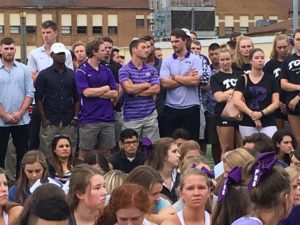 “Our program lost another teammate this morning in Drew Medford,” Schlossnagle said. “We ask that you please keep the Medford family in your thoughts and prayers.”

Some TCU volleyball players were also in attendance, as well as TCU basketball player Karviar Shepherd.

Paschal and TCU students and alums alike all agreed that Drew Medford made an impact on their lives.

“This right here, all of these people, just goes to show the impact that he made,” Shaw said. “Each and every one of you knew him, and he grew on all of us every day.”

Paschal principal Terri Mossige summarized a theme of Medford’s vigil: unity. “Never ever underestimate the spirit of a community,” Mossige said. “We stand together.”

It’s undeniable that Medford had an ability that only a select few in the world of sports possess — the ability to bring people together.

“He was more than just an athlete, he brought all of us closer,” Shaw said. “There’s not enough to say about him.”