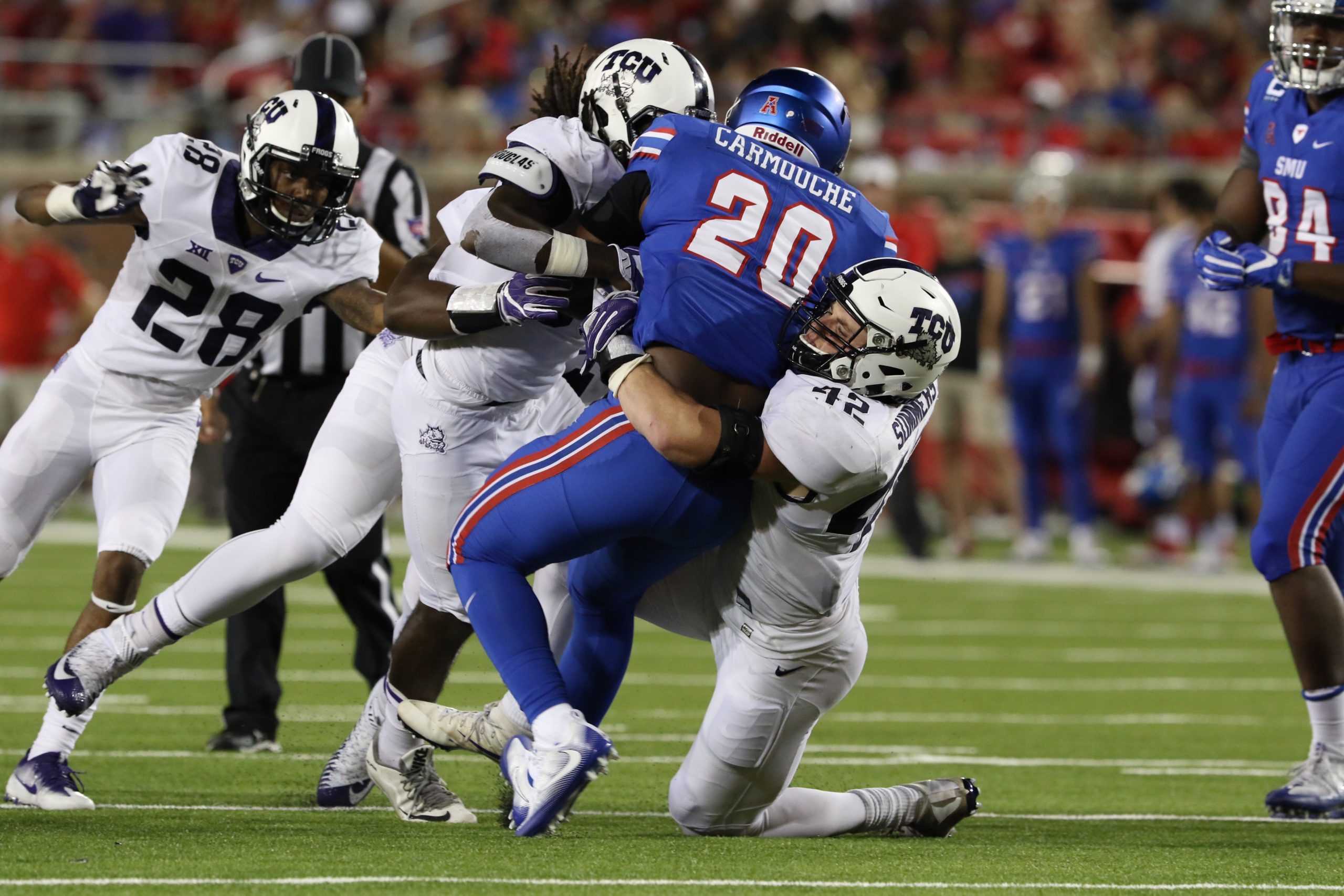 print
TCU retained possession of the Iron Skillet after 33-3 beatdown of their crosstown rival, the SMU Mustangs, Friday night in Dallas.

The Horned Frogs have defeated SMU five straight seasons and nine of the last 10. TCU is now 13-2 versus the Mustangs under Patterson.

On the first play of the second half, TCU quarterback Kenny Hill hit TCU wide receiver John Diarse with a slant over the middle, Diarse broke a tackle, and 75 yards later Diarse was in the end zone with a touchdown. Diarse’s scoring sprint extended TCU’s lead to double digits, 13-3.

Diarse is one of five Big 12 players since 2014 to have two 75-yard or longer receiving TDs.

“Diarse has been in big ball games at LSU, and he transferred here because he wanted to catch more balls,” Patterson said. “The bottom line is he’s done a great job.”

Back in the second quarter, TCU quarterback Kenny Hill threw a pass that was intended for John Diarse, but was intercepted on the goal line by SMU linebacker Anthony Rhone. Diarse was on the receiving end of a targeting call on SMU cornerback Darrion Millines, who was ejected from the game.

Kenny Hill passed for a TCU career high 452 yards, sixth-most in school history. He completed 31-45 attempts, including 19-26 for 302 yards in the second half. It was Hill’s second 400-yard passing game of the year.

The running back had five catches to 53 yards, and 14 carries for 89 rushing yards.

The Horned Frogs pulled away in the third quarter, scoring 14 points unanswered points. TCU improved to 101-3 under Patterson when allowing 17 points or less.

TCU’s award winning radio team reporting that C Austin Schlottmann has a broken ankle and obviously will not return.

“We’ll see if Schlottmann plays next week,” Patterson said. “I heard the radio group announced something, but whoever told them I’ll fire because it’s illegal to be talking about injuries.”

TCU kicker Brandon Hatfield came into the game for the first time in the fourth quarter and hit a 25-yard field goal to stretch the Horned Frog lead out to 23-3. He later added another 30-yard field goalto give the TCU a 26-3 lead.

After going 181 passes without a pick, safety Niko Small intercepted SMU quarterback Ben Hicks for TCU’s first defensive interception of the year with 6:08 left in the game.

“We rose to the occasion on defense, and finally got a pick,” Patterson said.

Shortly after the takeaway, Trevorris Johnson made the Horned Frogs’ first rushing touchdown of the game from 14 yards out to put TCU up 30, 33-3.

Later in the game, safety Nick Orr picked off Hicks for a second interception on a pass over the middle of the field.

TCU’s next game is Saturday October 1st at Amon G. Carter Stadium against the Oklahoma Sooners. Kickoff is set for 4 p.m.