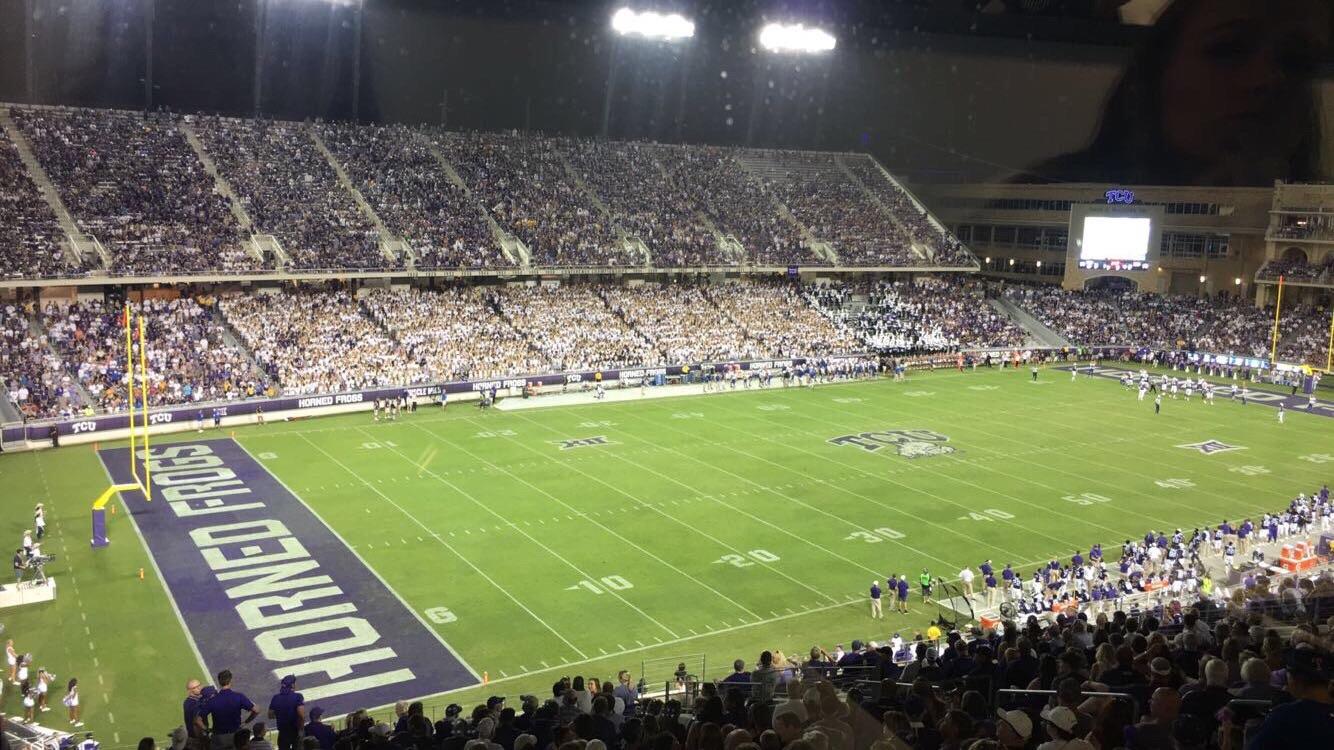 print
Football returned to Fort Worth on Saturday night as the TCU Horned Frogs kicked off their 2016 season against the South Dakota State University Jackrabbits.

The Frogs jumped out to an early 7-0 lead on the arm of Kenny Hill and the legs of Kyle Hicks. Hill began the game 3-3 passing for 24 yards. Hill’s first completion in purple and black went to wide receiver KaVontae Turpin for a gain of seven.

On the Frogs’ first defensive possession, they gave up three first downs to the Jackrabbits before forcing a three-and-out after an SDSU incompletion on 3rd and 11.

After TCU forced another SDSU punt, the Jackrabbits got on the scoreboard with a 25-yard field goal by kicker Chase Vinatieri, the nephew of longtime Patriots and Colts kicker Adam Vinatieri.

The Frogs ended the first quarter knocking on the door, as they had first and goal at the eight yard line. However, the Jackrabbits intercepted Hill at the one-yard line. Hill attempted to connect with wide receiver Ty Slanina on the interception.

Just four plays after Hill’s interception, SDSU running back Isaac Wallace ripped off an 87-yard run for a Jackrabbit touchdown. SDSU took their first lead of the game with a 10-7 lead over the Horned Frogs.

On TCU’s first play from scrimmage after the interception, Hill threw another interception to the Jackrabbits on TCU’s 27-yard line. His pass was intended for wide receiver Deanté Gray.

SDSU quarterback Taryn Christion makes TCU pay for the turnover, as he converted the turnover into points on a 12-yard touchdown run. The Jackrabbit possession took just three plays.

The Horned Frogs couldn’t answer back on the following drive,as they were forced to punt.

With about four minutes left before halftime, Turpin returned a SDSU punt 81 yards for the Frogs’ second touchdown of the game. Turpin’s return TD cut the Jackrabbits’ lead to just three, 17-14.

On the next SDSU possession, TCU defensive tackle Aaron Curry sacks Christion, and forces a fumble that is recovered by TCU linebacker Montrel Wilson on the SDSU 13-yard line.

The Frogs capitalized on the great starting field position, as Hill ran for a four-yard touchdown on a read-option play with running back Derrick Green, a transfer from Michigan, on the fourth play of the drive.

TCU regained the lead 21-17 after the score.

However, the Jackrabbits countered with a 31-yard touchdown pass from Christion to 2015 FCS First-Team All-American wide receiver Jake Wieneke. The SDSU scoring drive took just 49 seconds, and the Jackrabbits retook the lead 24-21.

Hill led the Horned Frogs on 51-yard, 47-second scoring drive that was capped off by 32-yard field goal by kicker Ryan Graf with just two seconds left in the half.. Graf’s kick knotted the game up at 24 a piece heading into halftime.