TCU 360All TCU. All the time.
74.9 F
Fort Worth
Facebook
Instagram
Twitter
TCU 360All TCU. All the time.
News Community TCU student recalls 9/11 attack on the Pentagon
Facebook
Twitter
Linkedin
ReddIt
print
For many TCU students 9/11 is a historical event, rather than a sharp memory, but for one sophomore nursing student it is the day that marked the end of innocence for the U.S.

“It kind of disconnected us in a way because there are so many barriers now and we’re always on guard,” said retired Master Sgt. Brad Davis, 41. A nursing student at TCU, 15 years ago, Davis worked at the Pentagon as a chef in the Army. He served 22 years.

“I remember watching it on TV actually, and when it hit the Pentagon, I was like ‘man what happened to my friends,’” Davis said. “It was tough and I couldn’t go [to the Pentagon]. They wouldn’t let you. Once it happened, it became a crime scene.”

More than 3,000 people were killed in the 9/11 terrorists attacks carried out by al-Qaeda. In addition to the attack on the Pentagon when American Airlines flight 77 flew into the west side of the complex, American Airlines Flight 767 and United Airlines 175 flew into the World Trade Center destroying the twin towers. United Flight 93 crashed into an open field in rural Pennsylvania.

The attack on the Pentagon killed 184 people – 125 of whom worked there. 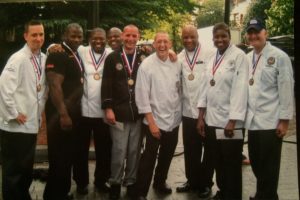 Davis said he was unable to contact his friends that day. All the phone lines were busy as people tried to reach loved ones.

“I was back in the Pentagon the next day and it was hard,” he said. “You just couldn’t believe it happened in our country. It changed everything. It just put us all on edge and it started a war, and [now] it’s 15 years.”

Davis said he remembers life before 9/11.

The way security operates and the way people are treated changed drastically following the attacks, he said.

Referring to the Pentagon, he said anyone used to be able to walk right in asking for a tour but after 9/11, “they locked that place down.”

When it came to airports, you could walk around freely with minimal security and even take your friend right up to the flight gate, he said.

He said xenophobia and the fear of terrorism also escalated after 9/11.

“America is supposed to be a ‘Melting Pot’ and we’re supposed to be united and it’s really divided us because of the hate,” he said. “People don’t want to understand people anymore; they just want to label them like ‘You’re a Muslim’ or ‘You’re a Christian’ and it’s not just religion, it’s race, it’s everything. It just really started a big divide of us.”

Davis said he still feels the pain from 9/11. He said he doesn’t often talk about it because it’s so emotional for him.

“When I think about war, I think that there’s got to be a target and innocent lives being lost – there is no excuse for that. It’s hard talking to you about it, It’s pretty hard. I never talk about it.”