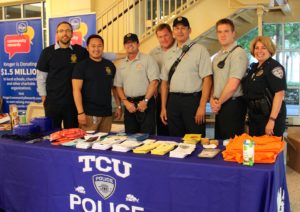 National Night Out is a nationally observed day that aims to strengthen police and community relationships and bring awareness to crime prevention.

George Steen, a TCU police officer, said it’s a way to get people out of their houses to meet their neighbors.

“We’re trying to get everyone together so that if you see something going on in your neighborhood, you will pick up the phone and call,” Steen said.

Steen wants events like this to start up in other communities by students who graduate and become tax-paying citizens.

“They were very accommodating,” Ramirez said. “They gave me tips on what certain laws are and how to go about it; they communicated really well with me.”

Steen said he hopes National Night Out will build trust within the community and start a dialogue about current issues.

“We try to show our support for law enforcement officers who we work very closely with,” Nguyen said. “We want to get to know the community we are serving and answer any questions or concerns that people might have as far as the legal process goes.”

The booth in the BLUU was just one of many events taking place around the city tonight. Residents of Fort Worth were encouraged to get outside and meet with police officers and other city personnel.