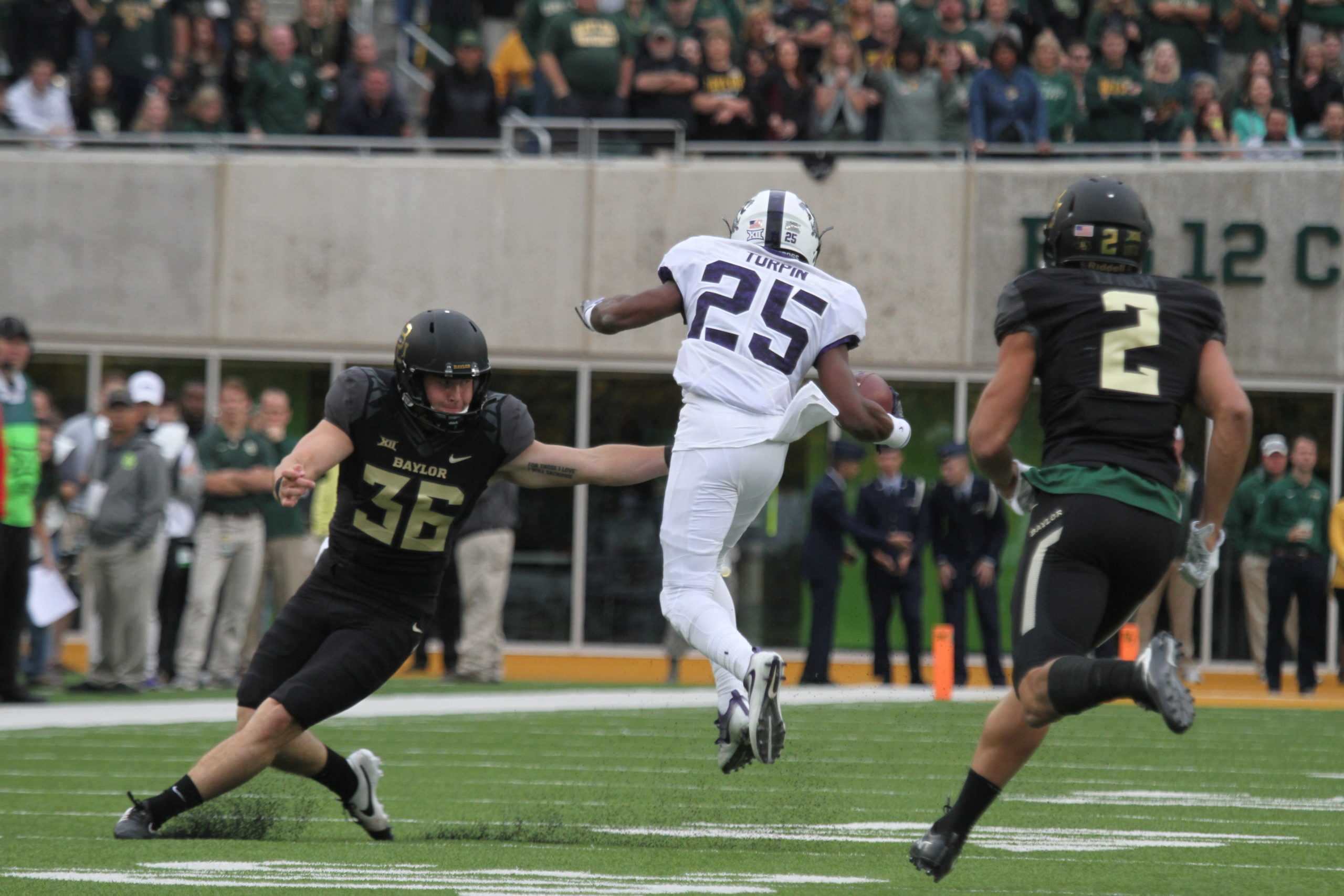 “We knew he had to get points every possession because Baylor can score quickly,” TCU quarterback Kenny Hill said.

Saturday’s win broke the tie in the all-time series, as TCU now leads the series 53-52-7.

TCU’s 62 points were the most scored in its 112-game history against Baylor.

“The offense got their swagger back,” TCU head coach Gary Patterson said.

TCU’s 688 yards of total offense were a season-high and the eighth-most in TCU history. It was the highest total since a 750-yard effort at Texas Tech last season. The Horned Frogs are 3-2 against Baylor since joining the Big 12 in 2012.

Here are five takeaways from the Horned Frogs performance:

Hill had 202 yards passing and a touchdown on 14 of 25 passing against Baylor in the first half.

He finished with 244 yards passing and a touchdown on 17 of 30 passing.

Hill was zipping passes, making quick reads, and running when the openings appeared.

He also ran for a team-high 74 yards in the first 30 minutes, including a scramble for 40 yards. Hill’s 85 yards rushing was his second-best total of the season.

Contrast this with his performance against Texas Tech. Hill passed for 160 yards and an interception on 16 of 29 passing and ran for 35 yards on six carries.

“I understand why I didn’t finish the game last week, and it woke me up,” Hill said.

TCU put an emphasis on the ground game which gave the team 59 total carries that went for 431 rushing yards.

Kyle Hicks ran for a career-high 192 yards and five touchdowns after not practicing the entire week because of a lower-body injury.

Baylor was his fourth 100-yard game of the season and his career.

Hicks’ five rushing touchdowns tie for second-best in a game in TCU history with Tony Jeffery (5, vs. Tulane, 1986) and second to LaDainian Tomlinson (6, vs. UTEP, 1999).

“The success came from great blocking by my offensive line, and the wide receivers did a great job blocking down field as well,” TCU running back Kyle Hicks said.

Freshman running back Darius Anderson had a season-best 44 yards rushing on seven carries.

TCU’s other freshman running back Sewo Olonilua had two carries for 28 yards and a touchdown.

“They’re both young and hungry, and they both have great play-making ability,” Hicks said. “I do the best I can to prepare them for any game situation,and I like how they’re coming along.”

KaVontae Turpin had four carries for 40 yards rushing and a team-high six catches for 49 yards.

“Turpin just gives the offense energy,” Patterson said. “He’s just one of those cool guys who I’m upset with off the field and always realy happy with on the field.”

Turpin’s quarterback and running back were both excited about his performance.

“Turpin is a big play waiting to happen,” Hicks said.

TCU ran for a season-high 431 yards, seventh-most in program history and the highest total in 16 seasons under Patterson.

TCU kicker Brandon Hatfield hit  field goals from 26 yards and 39 yards on his only two attempts against Baylor. This is a serious improvement from Hatfield’s performance against Texas Tech, where he missed field goal kicks from 37, 32, and 39 yards.

Part of Hatfield’s improved performance Saturday could be attributed to TCU kicking legend Jaden Oberkrom, who leads the Big 12 in made field goals with 79. Oberkrom said he went golfing with Hatfield on Monday and offered him some kicking advice.

Hatfield is now 9-13 kicking this season.

Baylor’s run game was No. 1 in the Big 12 and fourth in the nation going into Saturday’s game,  averaging 299.3 yards per game.

Four of Baylor’s players, including quarterback Seth Russell, averaged 45 or more rushing yards per game. The Bears had zero rushing yards on seven carries after the first quarter and finished the game with just 133 yards rushing on 45 carries against TCU.

“Defensively, we knew we had to stop the run, and we did a nice job,” Patterson said.

Cornerback Ranthony Texada’s pick six was the first one for TCU since Derrick Kindred’s against Kansas State last season.

Baylor scored the first seven points of the game on the opening drive and didn’t score again until there was only 2:29 left before halftime. TCU went on a 31-0 run after Baylor’s opening score.

“I think it made a difference being able to down the ball inside the ten yard line multiple times,” Patterson said.

“Adam Nunez had a lot of punts inside the 20, so the field advantage really helped us out,” TCU safety Denzel Johnson said.

TCU has a bye next weekend and next game will be back in Amon G. Carter against Oklahoma State November 18.