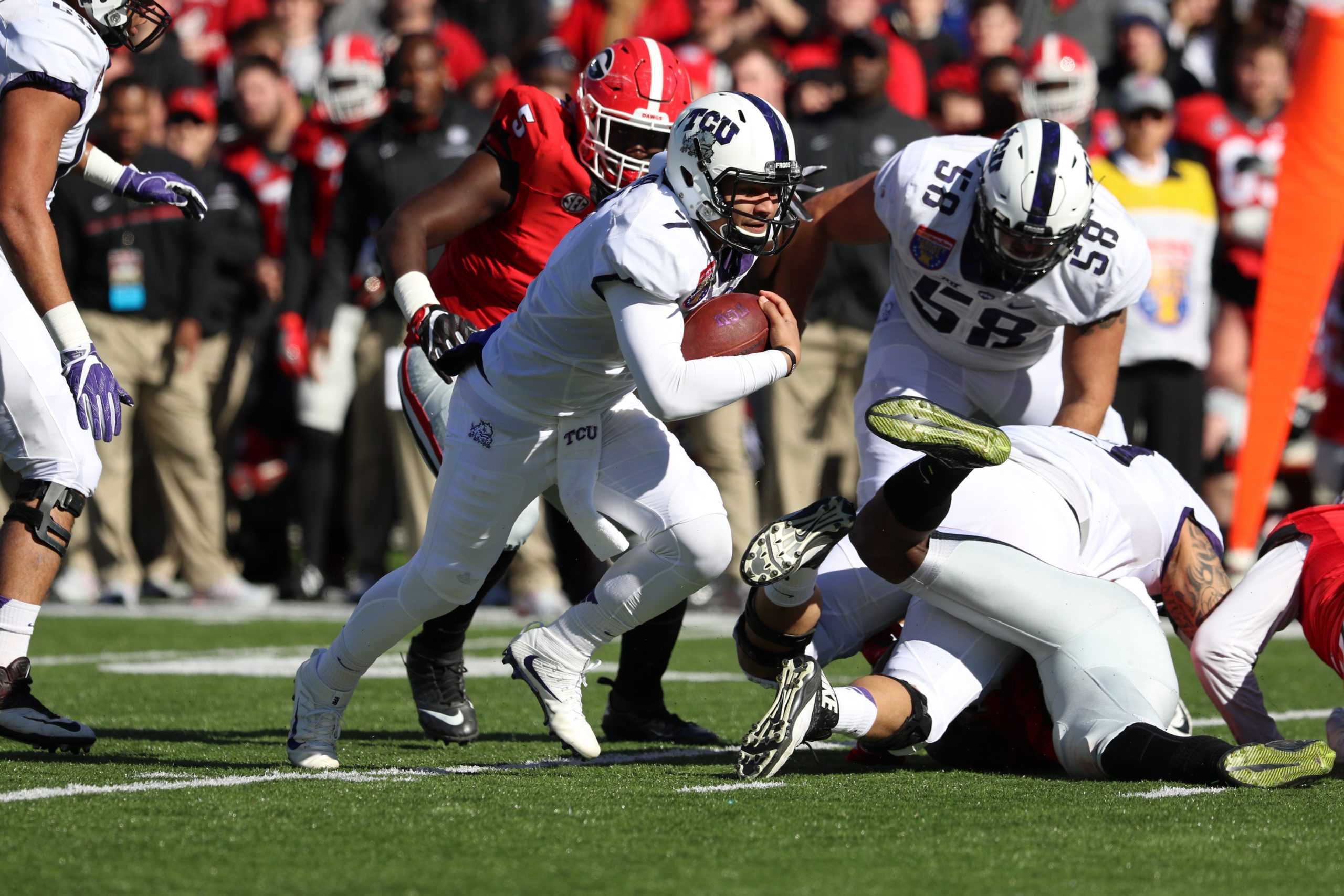 print
After a hard-fought, back-and-forth affair, TCU came up short against the University of Georgia on Friday at the Liberty Bowl in Memphis, 31-23.

The game started off slow with both teams punting on their initial possessions, but it didn’t take long for the action to heat up. On Georgia’s second possession, facing a third and eight from his own 16, Georgia quarterback Jacob Eason evaded the TCU pass rush and threw over the middle to wide receiver Isaiah McKenzie for a  77-yard gain. The pass was the fourth-longest pass in Liberty Bowl History, the longest reception of McKenzie’s career and the longest completion of Eason’s career.

With about six minutes left in the first quarter, TCU’s offense finally started moving the chains. Running back Kyle Hicks started the drive with a nine-yard run and finished the drive with 40 yards rushing on five carries. TCU kicker Brandon Hatfield capped the drive with a 40-yard field goal, cutting the UGA lead to four, 7-3.

Where TCU’s momentum really kicked in was when TCU defensive end Tipa Galeai forced and recovered a fumble on the UGA 20 yard line. TCU quarterback Kenny Hill ran it in for the Frogs first touchdown of the game. But, Hatfield missed the extra point, leaving TCU with a two-point lead, 9-7. That missed PAT would be key later in the game.

Midway through the second quarter, TCU began a drive at the UGA 45 after a Bulldog punt. Four plays later TCU found itself in the end zone once again, this time on a Hill pass to wide receiver i9hn Diarse on a 10-yard slant pattern. Hatfield hit the extra point to give TCU a 16-7 lead.

TCU went into the half with a 16-14 lead after Georgia could not capitalize on a Kenny Hill fumble, as they attempted a 53-yard field goal, but had it blocked by TCU defensive lineman L.J. Collier as time expired.

After a promising 13-yard run by Hicks on the first possession of the second half, he fumbled the ball back to Georgia, who capped off a 12-play, 6:36-long drive with a four-yard play-action passing touchdown from Eason to wide receiver Javon Wims that gave Georgia the lead back, 21-16.

The Horned Frogs answered the UGA score with one of their own. A nine-yard touchdown pass from Hill to Diarse gave TCU the lead once again 23-21.

Georgia responded with a 30-yard field goal that capped off seven-play, 56-yard drive to take a one-point lead, 24-23.

After another Hatfield missed field goal halfway through the fourth quarter, Georgia took the lead for good 31-23 on a Nick Chubb 13-yard touchdown run that capped off a nine-play, 70-yard scoring drive.

TCU picked a quick first down on a six-yard run by Hicks, but turned it over on downs after a fourth-and-four incompletion that was intended for wide receiver Taj Williams.

After TCU attempted to extend the game with a timeout after Georgia’s first play on offense, Georgia running back Nick Chubb ripped off a 27-yard run down the sideline that salted away the game, and the Bulldogs head back to Athens with an 8-5 record as the 2016 Liberty Bowl Champions.

Here are five things to know about the Liberty Bowl matchup on Friday afternoon between the Horned Frogs and the Bulldogs.

1. Kenny Hill and the TCU have another uneven performance

The story all season with this Horned Frog offense has been that they have the potential to put big numbers, but commit critical mistakes in key spots. That narrative certainly played to fruition on Friday. While Hill threw for 146 yards and two touchdowns to Diarse, and Hicks ran for 88 yards on 15 carries, both Hill and Hicks fumbled the ball away to the Bulldogs. Hill’s fumble ended up just costing TCU the opportunity to add a few more points before the end of the half. Hicks’ fumble led to a Georgia touchdown that gave them the lead at the beginning of the second half.

“When it comes down to the end, I have to make more plays as the quarterback,” Hill said. “It’s just tough, and you hate it for the seniors with it being their last game.”

Patterson came do his quarterback’s defense after the game, “You’re either with a guy who’s running and he’s not 100 percent,” Patterson said. “He’s playing with an ankle injury.”

2. TCU defense stood tall in the first half but faltered in the second

“In the first half we played better and then they [Georgia] turned up the knob” Patterson said. “We didn’t do a good enough job on both sides of the ball when we needed to.”

“They [Georgia] came out and made a few more plays than we did,” Small said. “I feel, as a whole, our defense played well, but we just have to tackle better and make more plays.”

Trenton Thompson lived in the backfield on Friday, totaling a Liberty Bowl record three sacks and eight total tackles. One of those sacks pushed TCU 10 yards back for a 41-yard field goal attempt that Hatfield missed.

Thompson credited his performance to his efforts in practice.

“I think I practiced pretty well,” Thompson said. “I went in with the mindset that you have to stick with it and listen to the coaches.”

With his 142 yards rushing, Chubb joined Herschel Walker and Knowshon Moreno as the only Georgia players with multiple 1,000-yard seasons. He also joined Walker, Todd Gurley, and Garrison Hearst as the only Georgia running backs with over 3,000 career rushing yards.

“I think we just kept pounding and kept opening it up,” Chubb said. “It’s a blessing to be where I am, and I thank God every day.”

5. TCU has a lot of experience returning next season
TCU only had seven seniors on this year’s team, so next season the team will be loaded with upperclassmen. Hill, Hicks and most of the defense will return.

“As I told my kids in the locker we were proud of them,” Patterson said. “You’ve got to step forward and get ready to go.”