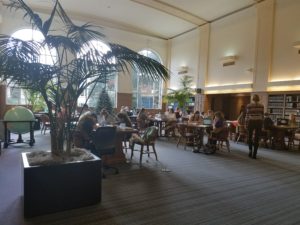 At the end of every semester, the library is packed and finding a seat can be a challenge. Senior biology major Bakari Samin said a person knows when it’s finals week because as soon as the library doors open, everyone sprints to find a seat like a Black Friday sale.

The nature of the TCU library has changed from a place of checking out books to a place for students to gather and study.

Tracy Hull, associate dean of the library, said it’s fantastic that it has its own nickname and Snapchat geofilter since the library is breaking away from the mold and it is the students who have made it happen.

“Part of the reason as to why I think is great is it exposes students, whether it be directly or indirectly, to the resources that we have to offer,” she said. “It provides a place for students to come gather and get out of the [residence hall room] and away from the social distractions that they have in the [residence hall]. They might come here and plan to study, but they end up socializing. That’s OK. I think you can get a little bit of both, social and intellectual. That is how libraries have redefined themselves. We don’t want to be the stodgy librarians that people stereotypically think we are.”

Sophomore social work major Nasrallah Alkhabi said he likes the environment in the library since it helps him study — because if he were home, he would be more likely to be lazy.

“I find myself using the computers here,” he said. “It’s updated, so that has helped me to study and to have all my stuff here. I don’t have to bring my laptop.”

Senior marketing major Brittany Hudson, who has been working in the library since her sophomore year, said the student workers do the same things as they did before the layout change, just dealing with fewer books.

“It’s more student-focused like helping students with finding things on campus as well as some of the facilities in the library,” she said. “It’s working with students more than we used to. There [are fewer] students checking out books. A student checking out a book is kind of rare. The environment as a whole is more of study space than a general library. They emphasize studying here instead of books.”

Hull said the Internet has been one of the driving forces for the changes being made in libraries.

“More things every day are available online,” she said. “Our culture revolves around Google, doing research online, communicating online. It has made us able to offer resources online. We can deliver a lot more online. Now that we have the internet, students can help themselves.”

Hudson said technology has helped a lot with the work that goes on behind the desk.

Hull said another thing that has greatly affected libraries is group projects, because they are more common today than a couple of years ago.

“Now it’s just common, it’s the norm,” she said. “That’s why we have a need for so many group study rooms. Students need a space where their group can work on a project in a quiet focused environment where they can interact without bothering other people.”

Senior economics major Isuru Perera, a student worker for the library since his first year, said having all the resources nearby to each other has made it easier.

“It’s just a better flowing system,” he said. “We get questions every day. That system works better now, especially with the expansion of the library. It’s a much more efficient way of serving the patrons.”

Hull said another thing that has changed within the library is that there are liaison librarians for different departments, instead of just having general librarians.

“The students have already done the first level of the easy stuff,” she said. “They’ve got that down, but going into that deep end, they need a little bit more help. Those consultations are more time-consuming for the librarians, but that is what they are there for and they thrive on that. It’s too hard now for librarians to be generalists because there are so many resources out there. They are doing the purchasing of resources in those areas, they’re going to know them better.”

Hull said the TCU library is used more than any other library that she has worked in, and the number of people who come into the building is a lot higher than at other institutions.

“People like this building, they come to this building,” she said. “Students study here. The students went to the [Board of Trustees] and asked for us to be open 24 hours, so that happened. There was a lot of demand for the use of this building.”

Hull said for the size of the campus, there should be 20 percent of the student population in the number of seats in the library Students in the past would get desperate for seats and outlets during finals week, and students sat on the floor just to have an electrical outlet, she added.

“If you counted every single seat, we were still way below what we should have been, especially during finals time,” she said. “It was horrible. People were all over this building. We had a serious problem.”

Perera said the new technology and study space has brought in more students, but space availability is still not meeting the demand.

“More or less, it’s requiring more space and more equipment to meet their demands,” he said.

Hull said the two biggest changes since the renovation are the setup of the building and the reduction of the amount of books in the library, even though the library is still buying around 12,000 to 13,000 books per year.

“We haven’t reduced the number of our books,” she said. “We are still buying a lot of books every single year, but a lot of the things that were older and not utilized as much have been moved to the off-site shelving facility.”

Hull said they needed warehouse space that could accommodate 20 years’ worth of growth and currently have around 950,000 books at the library annex, which is located on West Bolt Street.

“Working with the architects, they worked with the administration to help us communicate,” she said. “If we are going to need to make more people space and we don’t have a place to expand out, we have to find a place for the books. We were able to secure good warehouse space that the university bought and re-did.”

Hull said they worked to find a compromise for the amount of books that would stay at the library, while the rest were shipped off to the warehouse. The library was wanting to keep about 400,000 books on site.

“We derived that number with a couple of different things in mind,” she said. “We were looking at what were our space needs for non-book aspects, and then based on that, what could we fit in the library? We initially started with about 385,000 books on site because we wanted to allow room for growth.”

Hull said they started planning the book project around 2009 and plan to completely renovate the west side of the library in the future.

Hudson said the library still needs some updating, in particular the west side.

“There are still some parts of the library that are still kind of old,” she said. “Especially if you go to the third floor, there is space to study – there’s just not any tables or good chairs. It’s not being utilized in the way that it could be. For the most part, I like the new changes. I look forward to the changes because I feel they are going to come up with new stuff every year and it’s interesting to see how the updates have developed.”