Monarch butterflies flutter around the freshly planted yellow flowers along University Drive. The grass is trimmed, and groundkeepers are vigilant about stray leaves and fallen nuts. There’s not a thing out of place.

TCU’s campus is a reflection of how some students say they constantly feel they should be: flawless.

Maybe it’s because TCU is 60 percent female, or perhaps the competitive drive when it comes to school translates to a need for physical perfection as well.

“Here it’s an incessant competition,” said Tierney Johnson, a senior finance major. “Girls need to compare themselves to other girls to get the guy, get the formal date, get the attention they seek, when there isn’t really much of it to go around.”

For some TCU students, the desire to be beautiful and thin can get out of hand– but many said they rarely hear about eating disorders on campus.

Although there are many resources on campus that provide support for students, Johnson said she doesn’t think the school is doing enough.

“I think that it’s just flying under the radar, put on the back burner,” Johnson said. “Hopefully TCU realizes that it affects more people than you would think.”

Hannah Wallace is one student whose body image struggles morphed into a full-blown eating disorder.

Wallace loves to run. She said the sounds of her feet pounding the pavement and electronic music blasting through her headphones provide a time to de-stress, unwind and reflect on the week.

But it hasn’t always been this way. Wallace’s struggles with her body image began in her sophomore year of high school. Running in combination with dieting became obsessive and addictive—to the point of detrimental.

Wallace said negative thoughts began to permeate her mind from there, and things started to change.

“Whenever you get bullied about something, it’s obviously going to affect you,” she said.

Wallace said her mother put her on the Paleo diet, and she began exercising and watching her weight constantly. 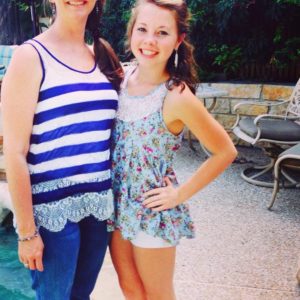 “I was watching what I eat all the time and exercising just to make sure I lost weight,” she said. “Everyone was like, ‘OMG, you’re so pretty now, you’ve slimmed out, you’re so beautiful.’ And it’s just so sad to me that beauty is so related to thinness.”

Wallace’s body image improved during her senior year of high school, she said.

“After that I got to the point where I was healthy again and eating and not worrying about it as much,” she said. “That was my end of the senior year.”

However, her transition period at TCU brought up many of the same issues she had in high school, only worse this time.

Wallace said she turned more towards binging and purging during her first year at TCU because it was easier to hide.

“This time, I turned more toward bulimia because it’s definitely harder to not eat when you’re constantly around people all the time,” she said. “So I just started purging.”

She said she eventually stopped purging her sophomore year, and for a while, she was in a good place. She took up running initially as a way to relieve stress and clear her mind from negative thoughts.

“I decided running was going to be my new thing,” she said. “But I never said I was gonna be a runner so I could lose a lot of weight.”

And that’s exactly what happened. Wallace said running and training became an obsession, a way to lose weight quickly.

“I was training for my marathon,” she said. “I was losing weight, and I was like, ‘Oh my god this is so awesome. Like I’m so skinny.’”

Wallace said she was not eating nearly enough to balance out the number of calories she was burning during her long runs.

“If you aren’t fueling your body, you’re going to deteriorate,” she said.

And her long runs took a serious toll on her body.

“I was getting really skinny and it ended up having a lot of negative health effects,” she said. “I had stress fractures on my feet and back, wasn’t sleeping well. I already suffer from anxiety and depression, and that made it like 5,000 times worse.”

She also said that despite all of the negativity stemming out of her eating disorder, it took her up to her breaking point before she could fully accept the fact that she needed help.

“When you’re in this mental state, you don’t see yourself that way,” Wallace said. “I think a lot of people don’t realize that people that could be 83 pounds, like disgustingly skinny, but to them, they look fat.”

With the help of friends, family and her therapist, Wallace started getting better.

“The first part to getting better from any mental illness is just recognizing that you can’t do it alone, and if you try to do it alone, you’re going to fail,” she said.

The reality of eating disorders in college

It may seem hidden and unnoticed at times, but eating disorders that arise in college are more common than some may think.

According the Multi-Service Eating Disorders Association (MEDA), 15 percent of women ages 17 to 24 have eating disorders. There are many factors that contribute to eating disorders in college.

“And if something [like college] pulls the trigger…you can see how college campuses are a huge transition,” she said.

TCU Counseling and Mental Health Center psychologist Amanda Swartz said the same thing: The transition period that college brings can often be a catalyst for something like an eating disorder to arise.

That pressure of being completely self-sufficient can be a huge stressor to some students, Swartz added.

“That can be sometimes a trigger for anxiety or depression or homesickness or an eating disorder if that is how it plays out.”

Dillon said she has worked closely with TCU students over the years and said some aspects of the school may contribute to eating disorder development.

“People are well-dressed, attractive, the typical look. And not that it’s bad, but if someone doesn’t fit that stereotype, it can be challenging if they didn’t have body image issues before,” she said, quoting what some of her TCU patients have told her.

What many people may not know is just how many people suffer from eating disorders in college.

According to the Multi-Service Eating Disorders Association:

Alongside the more commonly-known disorders of anorexia and bulimia, binge eating disorder can also be brought on specifically in someone’s first year of college.

She attributed binge eating disorder in college students to transition and life change as well.

Despite the notion that eating disorders are all about unhealthy relationships with food, Swartz said they are just a way of managing something deeper.

“Eating disorders are not about food,” she said. “They’re about emotions and a way to manage those emotions. Are they managing anxiety or feeling lonely from depression?”

“Feeling insecure and out of place is part of it,” Dillon added. “Inherently, college campuses are all about comparison and trying to find your place and identity.”

Swartz said this for those concerned about helping a friend or confronting someone who may be struggling:

“I always want to say: remember it’s not about food. If you have a friend you’re concerned about, make sure you’re connecting with them as a person, and not just focusing on what they eat for dinner. This is a whole person with a whole life that’s struggling with one part.”

Anyone who is struggling or has a friend with a possible eating disorder can visit the TCU Counseling Center, located underneath Samuelson Hall, as well as Campus Life or the TCU Recreation Center.