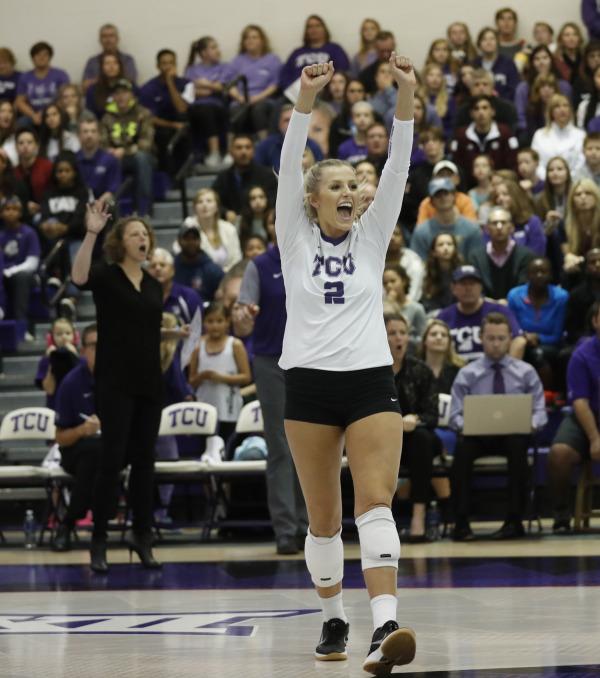 print
A tough schedule and a senior-laden roster helped the Horned Frog volleyball team make history as they return to the NCAA Tournament for the second consecutive season.

The Frogs play in the Lincoln regional in Nebraska on Friday against the Wichita State Shockers. A win will set up a contest on Saturday with the winner of the No. 1 seed Nebraska and New Hampshire matchup.

TCU boasts the No. 1 strength of schedule in the country and was ranked inside the top-40 in RPI all season long.

“It was a tough schedule and we had a lot of seniors coming back,” director of volleyball Jill Kramer said.

The Frogs ended the regular season with three straight five-set victories for a 14-12 overall record and a 7-9 record in Big 12 play.

“I think our non-conference schedule helped prepare us for Big 12 play,” Kramer said. “And I think Big 12 play helped us prepare for the tournament.”

The Horned Frogs have out-blocked their opponents in 20 matches this year. This year, they defeated No. 8 North Carolina. Last season, it was No. 2 Texas. TCU played 15 matches this season against top-50 RPI opponents and had a non-conference RPI that was ranked No. 8 nationally.

Wichita State is the Missouri Valley Conference champion. This is the Shockers 10th appearance in the NCAA tournament and second straight just like the Frogs. The Shockers won their conference tournament for the fourth time. They posted a 7-6 record this year against NCAA tournament teams.

“She [Gower] did a great job blocking for us last year in our defensive system as a middle-blocker, and her blocking numbers were great, but she knew she had to improve the consistency of her offensive numbers to have a shot because numbers matter, and she became consistent every day,” Kramer said. “She got to a point where we didn’t have to tell her what to do, and it’s really cool that she’s made such big growth.”

First serve against Wichita State is scheduled for 4:30 p.m. on Friday.