The benefit game was held at the Brahmas Arena in North Richland Hills where friends and family members of both fire departments watched firefighters clad in hockey gear play in friendly competition while fundraising for the Sisterhood of Arlington Fire Department (Sisterhood of AFD).

The Sisterhood of AFD is a support group which helps families of AFD firefighters and employees, builds communities among those families and aids the local Arlington community through charitable assistance.

Hillary Schwanbeck, the president of the Sisterhood of AFD, said the group initially started as a Facebook group called “Arlington Firefighter Wives” created by Lauren Arias, vice president of membership, in November 2015.

“We knew it could be much more,” Schwanbeck said. “And sought to find an existing non-profit to sponsor us during our start-up phase.”

The Arlington Fire Charitable Group (AFCG) later took the Sisterhood of AFD under their umbrella as a subgroup.

Last year, the Sisterhood of AFD raised over $3,000 for AFD families who have experienced major life events such as having a baby, missing work due to injury or illness or who have recently lost an active or retired Arlington firefighter.

This year, they came a little short of last year’s total at $2,700 during the hockey game.

Schwanbeck said the group aims to raise at least $6,000 so they have enough money to give freely and willingly to AFD families as needs arise.

“Obviously, the more money the better,” Schwanbeck said. “As more annual income would allow us to continue to host more community-building and charitable events.”

Below is an interactive roster of the Fort Worth Fire Department’s hockey team. 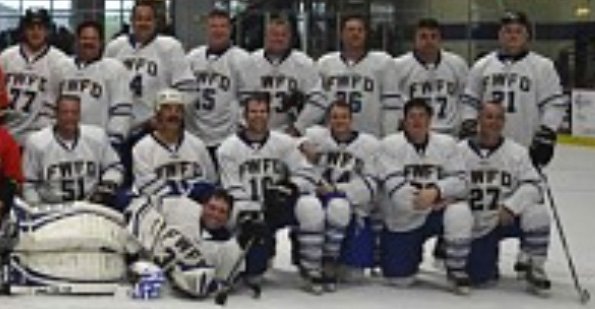 Chris Ballard, a Fort Worth firefighter and the team coordinator and goalie for the FWFD hockey team, said as much as he and anyone like to win, that wasn’t the point of Saturday’s event.

“Every charity game, we step forward,” Ballard said. “We represent the Fort Worth Fire Department and we just want to do good… and whatever the game brings to help another family or organization or something, we want to be a part.”

Ballard said that Fort Worth citizens can help contribute to events like the hockey game by volunteering, sponsoring firefighters and donating to the charity.

“People are very, very giving when we really have events that go toward benefits fallen officers, fallen firefighters,” Ballard said. “Events like today really helped an organization give back to the families and the community, so that’s one of the most helpful things you can do other than skate or be on the job.”

Schwanbeck said that regardless of where you live, everyone should be willing to step out and give back to those who put their lives on the line to save others.

If people or businesses want to get involved for another event, the Sisterhood of AFD is having their annual Arlington Firefighters Golf Tournament on June 5.

Anyone can reach out to the Sisterhood of AFD by going to their Facebook page or emailing them at afdsisterhood@gmail.com if they want to help or get involved with the group.

MyFW resident app gets an update