Junior Courtney Manning remembers growing up and being asked why she wore her hair the way she did. She was used to being different than everyone else, and she loved it.

“There were a lot of people that did perm their hair and they would always ask me ‘why don’t you perm [it]’ and like I don’t because I love my hair just the way it is,” said the theatre and educational studies double major.

Manning, who has worn her hair natural all her life, said she received the nickname “Cocoa Puffs” when she was younger, and had her hair compared to cotton for her big Afro balls, something her peers weren’t used to seeing.

With the help of her friend Tyler Traylor, Manning got the idea to create NaturallyMi after they realized there was not a community for students with natural hair on campus. With this new organization, they hope to empower individuals to love themselves and embrace what grows on top of their head. 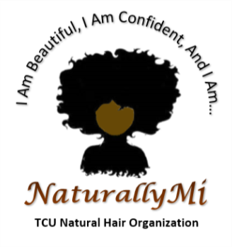 “At TCU, we have so many student organizations so it’s nice to be able to add one, even if it’s just the 20 women on campus who really care about natural hair,” said Assistant Director of Building Operations for the Brown Lupton University Union Natalie Boone, the organization’s advisor. “I think it’s nice to have somewhere for them to go.”

So far, NaturallyMi has about 25 members who are excited about the plans ahead.

One of their biggest goals is attending a natural hair convention. They also plan on having sample show-and-tell days where they can bring and discuss their favorite hair products. Throughout the rest of the semester, there will be length checks during meetings to measure hair growth, and lastly, they want to bring guest speakers to campus.

Their first guest speaker, Danielle Kemp, a healthy living and lifestyle expert, spoke about the importance of living healthy and taking care of your body.

Nutrition and personal training became her focus in 2012 after seeing family members in poor health at young ages.

Kemp has also been natural for 10 years and she makes her own products. She gave each member in attendance free samples and T-shirts. She hopes to come back to speak about healthy hair growing tips.

Loving and identifying with their naturalness is something many black women pride themselves in, but it’s also a struggle.

According to the “Good Hair Study” released by the Perception Institute in 2016, black women in the U.S. face, on average, more bias because of their hair than white women.

“There’s still going to be people that don’t like it,” Manning, the organization’s president said. “I’ve learned that I should appreciate what God has given me in its natural state.”

Boone, who has seen the rise of the natural hair movement, says she has been encouraged by the acceptance being natural has gotten during her life.

“You guys are so blessed that now people make it look beautiful when you twist it up and you can do so many different things with it – back in the day, I felt like all you could do was like a fro,” Boone said.”

NaturallyMi is open to all students, both men and women, who are passionate about hair. Meetings are held every second and fourth Thursday in the Wright Media Center at 7 p.m.

“It’s OK to love you just for who you are,” Manning said. “No matter what hair texture or what hair type, it’s beautiful.”