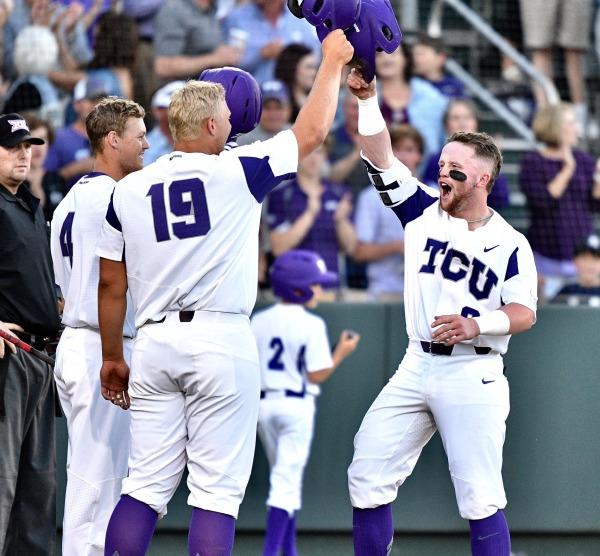 print
The No. 7 Horned Frogs moved to 5-0 in extra-inning games this season as they overcame a strong comeback effort by Texas to win 11-10 in 11 innings on a walk-off sacrifice fly from Connor Wanhanen.

“Great at-bat from Wanhanen, considering his at-bats in the second half of the game weren’t nearly as good as the first half,” said TCU head coach Jim Schlossnagle.

“I knew in the back of my head that I owed it to everyone on the bench and everyone in the game,” Skoug said. “I owed them that run because I caught a very poor game today. I really wanted to do what I could to get my team back in it.”

Cal Coughlin struck out the 7-8-9 hitters of the Texas lineup in order in the top of the 11th, before TCU loaded the bases in the bottom of the inning for Wanhanen. After falling behind in the count 0-2, Wanhanen hit a fly ball to deep left center to bring home pinch-runner Evan Williams from third and take game one from Texas.

The TCU lineup touched the Big 12’s leader in ERA and strikeouts, Morgan Cooper, for seven runs in just three innings. Cooper, who entered the game 6-2 with a 1.45 ERA, had not given up an extra-base hit in 38.1 innings of conference play before the Horned Frogs hit four doubles and a home run in the first three innings against him.

After UT pushed a run across in the top of the first, Austen Wade led off the bottom of the inning against Cooper with a double to left center, extending his on-base streak to 32 games. A hit batter, a strikeout and a walk set up Cam Warner to single hard back up the middle to put TCU ahead 2-1.

In the second, TCU broke out for four runs on three hits and a walk. Ryan Merrill walked with one out ahead of Wade’s second double in as many innings, putting two in scoring position. Luken Baker followed a strikeout with a two out, two run double down the left field line to make the score 4-1. Skoug then laced a two run homer to center field to extend the lead to 6-1.

Texas scratched a run across in the top of the third off of TCU starter Nick Lodolo, but Merrill got the run back in the bottom of the inning on an RBI single.

Cooper was pulled after the third inning, having given up seven runs on eight hits and three walks. The seven earned runs were two more than he had given up in conference play all season, and it raised his overall ERA to 2.27.

Lodolo was pulled after giving up two straight singles in the top of the fifth, as his pitch count had risen to 88. Charles King entered out of the bullpen, but allowed both Longhorns to score to make the score 7-4.

Lodolo finished the night having tossed 4+ innings with eight strikeouts. He gave up four runs on seven hits, a walk and a hit batter.

TCU answered the UT two-run inning with one of its own to make it 9-4 as eight and nine hole hitters Elliott Barzilli and Merrill each hit a solo home run. Both players are tied for third on the team with five home runs.

The bottom third of the Horned Frogs lineup, Josh Watson, Barzilli and Merrill combined to go 8-14 at the plate on Friday. The trio added four walks, three RBIs and three extra-base hits.

Texas roared back into the game in the seventh as they scored four runs off King. UT opened the inning with four singles in five batters, pushing King out of the game in favor of Haylen Green. Green entered with one out in a 9-6 game and issued a four pitch walk to load the bases. Wymer came on and struck out the first batter before giving up a two run single up the middle to cut the TCU lead to 9-8.

TCU got a single and a walk in the bottom of the seventh, but stranded both runners.

After getting the final two outs of the seventh, Wymer returned for the eighth and set down the Longhorns in order with two strikeouts. Wymer continues to be the most reliable Horned Frog reliever, as he leads the team in appearances (20) and ERA (1.54).

TCU closer Durbin Feltman came in for the ninth looking for his 12th save in 13 tries, but UT pushed an unearned run across to tie the game at nine. A leadoff single, a passed ball and two sacrifices scored the run to complete the comeback. The blown save was just Feltman’s second in 22 career attempts, but it was his second in the last three weeks.

The Frogs had the top of their lineup up in the  bottom of the ninth, but three straight ground outs to shortstop put them down in order.

Feltman returned for the top of the tenth, but a single, a walk and a catcher’s interference loaded the bases with two outs for Texas. The Longhorns took the lead on a single, but Watson threw out a second runner at the plate to end the inning and keep the score at 10-9.

With the runs in the 10th and 11th, the Horned Frogs were able to secure a pivotal series-opening victory over Texas, distancing themselves by 1/2 game from both Texas Tech and West Virginia who had their Friday game postponed. Those two teams will play a double header on Saturday in Morgantown. TCU leads Texas Tech by  1.5 games and WVU by 2.5 games in the Big 12 standings.

TCU and Texas square off in game two on Saturday at noon at Lupton Stadium. The game will be televised on ESPN 2.