SPOTLIGHT “13 Reasons Why” from TCU Student Media on Vimeo.

A new Netflix series is sparking controversy, compassion and conversations about suicide.

Based on Jay Asher’s popular 2007 novel, “13 Reasons Why,” the show follows the fictional story of a teenage girl named Hannah Baker who leaves behind 13 audio recordings on cassette tapes after committing suicide. Each tape addresses a specific person who Baker says played a role in her decision to end her own life.

The show has been received with both praise and scrutiny since its premiere March 31, however, some mental health experts have expressed concern that the plot paints a “revenge fantasy.” Netflix announced Monday that it intends to add a warning to the start of the series as an extra precaution to viewers.

Dr. Linda Wolszon, director of the Counseling and Mental Health Center said it’s a myth to think somebody caused somebody else’s suicide.

“It’s a fantasy that someone gets to die and communicate from beyond the grave,” said Wolszon. “The devastating thing about suicide is that it’s so final, and leaving that many people injured – the show depicts it like she’s getting revenge.”

However, there are those on campus who had a different reaction after watching all 13 episodes.

“The depictions in the show might not have been what people would normally assume would lead someone to suicide, but I think that’s why it’s effective,” said junior Abbey Gluck. “It showed that it doesn’t have to be a big event to lead someone to that decision, but can be smaller events over some time that can cause someone to feel alone or hopeless enough to make that decision.”

Gluck said she felt that the actors in the show handled the material well and delivered an amazing performance.

According to the American Foundation for Suicide Prevention (ASFP), suicide is the second leading cause of death for ages 15-34 in Texas.

The final two episodes of the show depict a graphic portrayal of suicide and sexual assault. This led some medical professionals to worry about the risk of suicide contagion. According to the AFSP, suicide contagion or “Copycat Suicide” occurs when one or more suicides are reported in a way that contributes to another suicide.

AFSP also reported that the risk of additional suicides increases when the story explicitly describes the suicide method uses dramatic or graphic headlines or images, and repeated or extensive coverage sensationalizes or glamorizes a death.

The show gained media attention before its release thanks to its promotion by executive producer and celebrity, Selena Gomez – who’s an active advocate of mental health awareness. 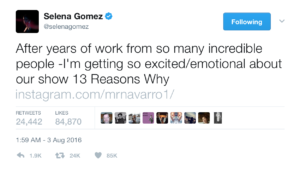 Both Gomez and the show’s writer, Nic Sheff, defended their decision in the detailed portrayal of Hannah Baker’s suicide.

Sheff referenced his own experiences with self-harm in a letter to Vanity Fair, stating: “It seemed to me the perfect opportunity to show what an actual suicide really looks like – to dispel the myth of the quiet drifting off, and to make viewers face the reality of what happens when you jump from a burning building into something much, much worse.”

The media response to the show has been so vast that the Frisco Independent School District sent out letters to parents across North Texas offering advice on preventing teen suicide.

The Jed Foundation – a national nonprofit suicide prevention program- released a list of talking points emphasizing the fictional aspect of the show.

“As a show, I think it was necessary to show the graphic depiction in order to develop the story,” said freshman Trey Fearn. “It was extremely hard to watch – which I think was the intended purpose.”

Though the series has earned both positive and negative reactions, the scrutiny of the show has sparked conversation on the topic in schools all over the nation.

Wolszon said that media attention certainly has a silver lining.

“Maybe the show – in all its controversy – will get people talking,” said Wolszon. “It will get parents and friends and educators just to pay more attention to it.”