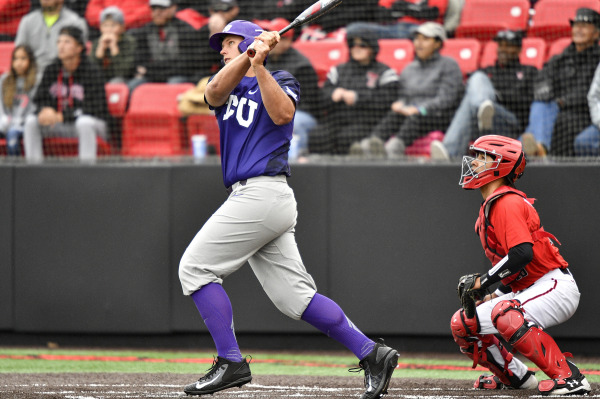 print
TCU Baseball took game one of a three-game series against Texas Tech in Lubbock, but was unable to hold onto a late lead in game two before losing by 18 runs in game three en route to a 2-1 series loss. TCU is now 31-11 on the season.

A two-out hit-batter in the first turned into TCU’s first run of the game. Evan Skoug took the pitch off the shoulder and advanced to scoring position on a wild pitch. Luken Baker’s single through the left side made it a 1-0 game.

TCU lengthened its lead in the fourth when Michael Landestoy doubled to right field and was able to score on a sac fly from Ryan Merrill.

Texas Tech threatened against Lodolo in the fourth inning with loaded the bases with no outs. Hunter Hargrove’s single put the score at 2-1 and an intentional walk loaded the bases again for the Red Raiders, but a 6-4-3 double play kept the Frogs in the lead.

Cam Warner and Evan Skoug singled up the middle in the seventh before a wild pitch allowed Warner to score.  Skoug then scored on a sac fly from Josh Watson to give the Frogs a 4-1 lead.

Lodolo (5-1) dominated the mound for the Frogs in a career-high eight innings, limiting the Red Raiders to just seven base runners in the game. A pair of double plays helped Lodolo finish the game with only four hits and four strikeouts. Durbin Feltman struck out the side in the ninth to pick up his career-best 10th save of the season.

Due to inclement weather that passed through the Lubbock area, Game 2 between No 2. And No. 6 Texas Tech was suspended in the bottom of the third with TCU leading 2-1. The game resumed Sunday morning at 11 a.m.

The Red Raiders rallied back with three runs in the sixth inning to take a 6-4 victory over the Frogs.

Texas Tech took advantage of a bases-loaded wild pitch with two outs to make it a 1-0 game early, but The Frogs responded in the second with a lead-off home run from Luken Baker. TCU grabbed the lead in the third when Evan Skoug scored on a throwing error by the Red Raiders’ second baseman as they tried to complete an inning-ending double play.

After Texas Tech scored on another wild pitch to tie the game in the bottom of the fourth, TCU rebounded with two runs in the fifth. Skoug singled up the middle to bring in Austen Wade. Baker hit a sac fly to add another run and push the score to 4-2.

Texas Tech, however, scored two of its runs in the game on a pair of two-out wild pitches. and the Red Raiders soon launched a solo home run in the fifth to inch within one run. A three-run home run in the sixth from Brian Klein erased the deficit for a 6-4 lead. Texas Tech’s bullpen kept the lead secure only allowing five base runners over the last four innings of the game.

Texas Tech scored runs in every inning en route to handing the Frogs a 21-3 loss in seven innings in Game 3 of the series.

TCU jumped to an early lead in the first. With bases loaded, Cam Warner sac flew to bring Austen Wade around. A two-out infield single from Nolan Brown drove in Connor Wanhanen for a 2-0 lead.

But Texas Tech retaliated and held no remorse. A ground out with the bases loaded made it a 2-1 game. Orlando Garcia’s two-run single to left put the Red Raiders at a 3-2 lead.

The Red Raiders poured on the offense throughout the game, adding numerous runs in four of the next five innings. Texas Tech faced six TCU pitchers but still batted around in scoring five runs in the third and seven in the fourth.

A pair of throwing errors allowed TCU’s only other run of the game to score. The Frogs had runners on base in all but one inning, but couldn’t get the hits to score runs. Twelve runners were stranded by TCU.

With the loss, TCU fell to 31-11 overall and 12-6 in Big 12 play, leaving Lubbock with a one-game lead atop the Big 12 standings. The Frogs return to Lupton Stadium to resume the March 21 matchup against Abilene Christian. The teams will resume the game with two outs in the top of the fifth and TCU batting with a 2-0 lead.