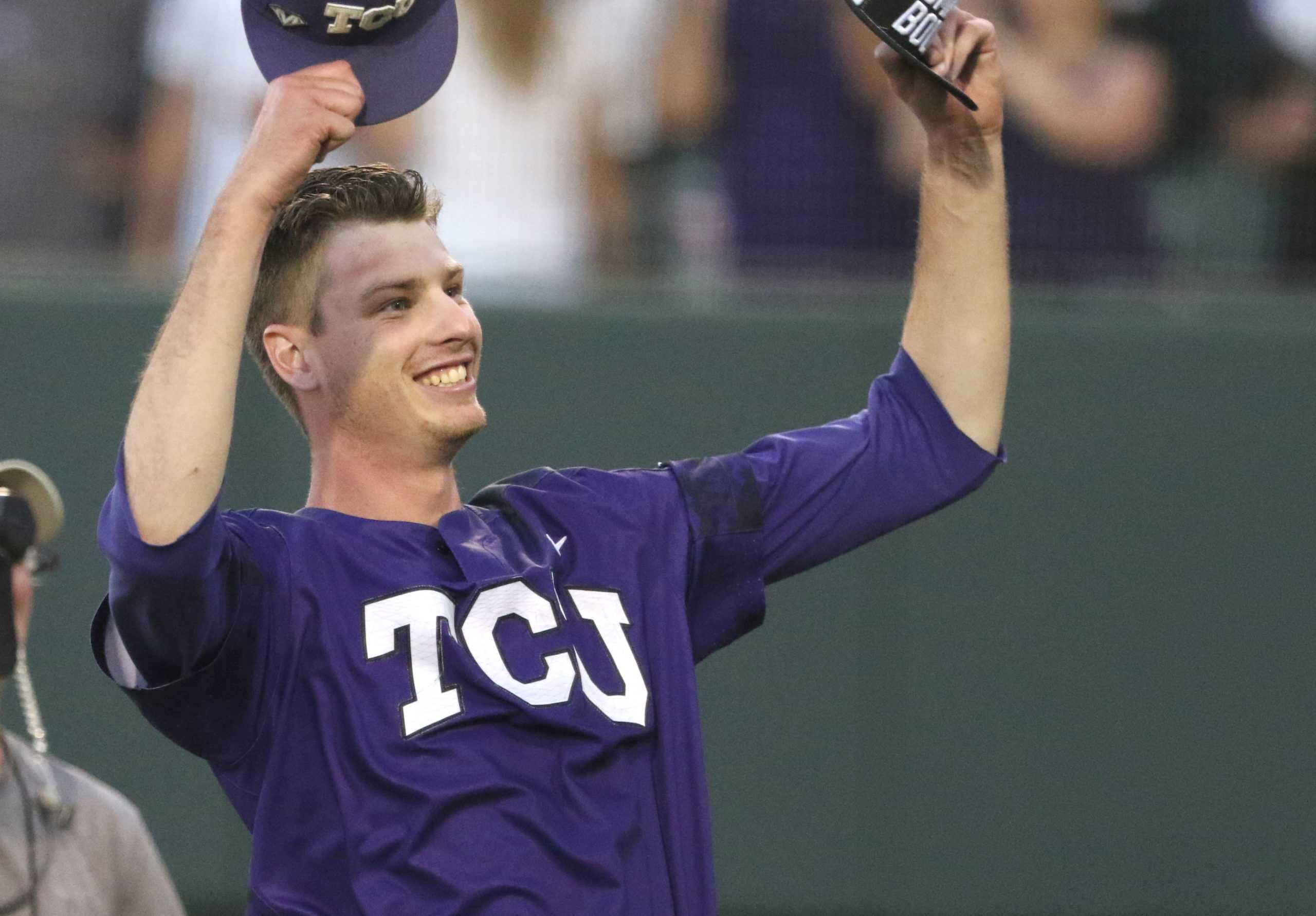 print
Brian Howard delivered another playoff gem as TCU knocked off Missouri State 8-1 to secure a spot in the College World Series.

Howard closed out his storied career at Lupton Stadium in grand fashion, as he allowed a leadoff home run, but shut down a volatile Missouri State lineup for the next 7.1 innings. Howard struck out 11, putting him over 100 punchouts on the season and allowed just four hits while walking two.

“This place has meant so much to me over the past four years,” Howard said. “Everything from the coaches to the facility guys to the administration to everyone involved, it’s just been the best four years of my life. This stadium has been a huge part of it, and this fan group and everyone here in this town has accepted me. It just means a lot to go out like this.”

Through his career, Howard pitched his best in the postseason. Howard is 6-0 in 12 postseason appearances with a 1.68 ERA and 72 strikeouts in 64.1 innings pitched. The Frog faithful will miss seeing that in Fort Worth, but he will have a chance to improve his already phenomenal legacy with his fourth trip to Omaha.

“The thing about Brian is that you know the bigger the game, the more ready he is going to be,” TCU head coach Jim Schlossnagle said. “I love all of our pitchers, but when it’s on the line, and when you have a chance to win a championship or hold off elimination, you want ‘Big Game Howie’ out there.”

TCU and Missouri State traded runs in the first, as Cam Warner singled home a run in the top of the inning while the Bears’ leadoff hitter Hunter Steinmetz hit a solo shot in the bottom of the inning.

The Frogs answered the Missouri State run with one of their own in the top of the second when Nolan Brown reached base on an infield single and scored three pitches later on a double by Elliott Barzilli.

Evan Skoug added cushion to the lead in the third, following a bunt single with his 20th home run of the season and fourth in five postseason games. Skoug has hit 16 long balls in the last 33 games and is the first Frog with 20 in a season since Chris Connelly in 1997.

With Skoug expected to be a high selection in the Major League Draft that starts Monday, Sunday’s Super Regional was likely his last appearance at Lupton Stadium. In his three-year Horned Frog career so far, Skoug sits in the top five in RBIs and home runs and has meant even more to the team as a leader.

TCU added an extra insurance run in the sixth as Skoug stepped to the plate with the bases loaded and drew a walk for his third RBI of the game and his 12th in five tournament games.

Barzilli blew the game open in the top of the ninth with a three-run home run to put the Frogs ahead 8-1. The homer was also Barzilli’s last at bat at Lupton Stadium. Barzilli started his career at Georgia Tech, but has been a part of the last three Omaha teams.

“I kind of thought about it,” Barzilli said of his last at-bat. “I just said ‘put a good at-bat together.’ I knew what that guy had, and I knew how he was going to attack me. I just want to hit it hard. I haven’t been swinging the bat as great as I want to, but I just wanted to have a good last at-bat.”

Sean Wymer relieved for the second straight game and dominated just as he did in game one. Another five out performance by Wymer finished off the win and started the celebration.

One constant for the Frogs over the course of their five NCAA tournament games thus far was the starting pitching. The combination of Mitchell Traver, Jared Janczak and Howard have gone 5-0 while tossing 35.1 innings to the tune of a 1.78 ERA.

The Horned Frogs will look to their starting pitching for continued success as they will head to Omaha next weekend looking for their first ever National Title. TCU will play the winner of the Florida and Wake Forest Super Regional.

“I couldn’t be more excited to win and get back to Omaha,” Schlossnagle said. “Let’s see if we can’t hang around just a little bit longer than the last couple of years.”