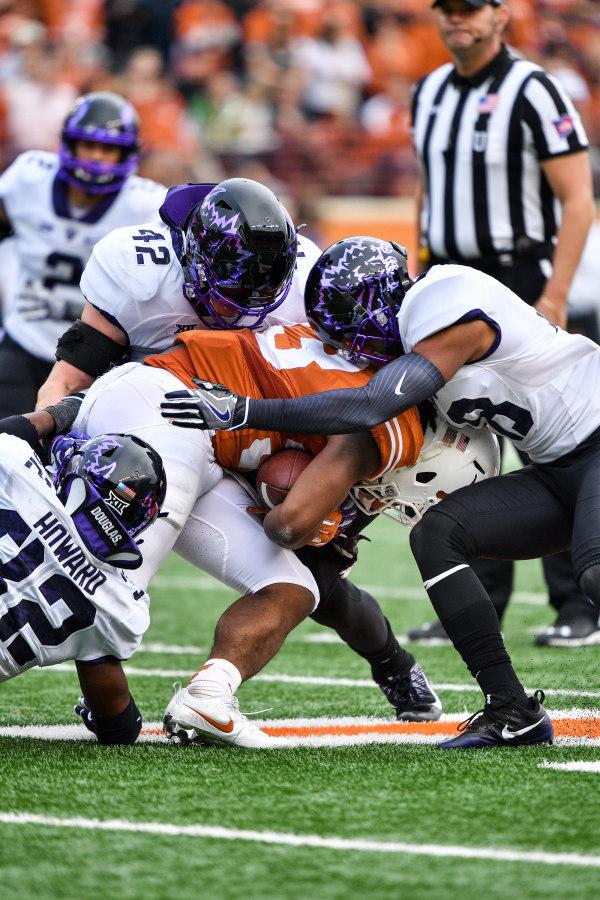 print
The primary themes that arose each time the Horned Frog defense came up at Big 12 Media Days on Monday in Frisco, Texas were size and depth.

TCU coach Gary Patterson spoke about using the latest recruiting cycle to beef up an interior line that has played underweight in the past.

“It’s hard to play in this league and play consistent when your best players on the inside are 260, 270 pounds,” Patterson said. “We went out and got four guys that are in the 300-pound range.”

Another goal of the 2017 recruiting cycle was adding depth on the ends of the line to be able to keep fresh players in the game from the first snap to the last, while also limiting injuries.

“The five times we have led the nation in defense, we averaged 55 plays per game,” Patterson said. “Now we average somewhere between 70 and 90, so every two games, you are playing a full game again. The kids are playing 90 plays instead of 55 plays, now it’s [the coaches] job to get them off the field.”

Patterson made it very clear that despite a defense that ranked second in the conference in total defense in 2016, he was not pleased.

“Yeah it was [a down year],” junior linebacker Ty Summers said, echoing the sentiments of his coach. “We shoot for perfection. I felt slightly embarrassed that we had the defense that we did, knowing the tradition at TCU. That being said, we are going to take that and shape it into a way to fuel the fire.”

TCU will return seven starters from that 2016 unit, including the top two tacklers in the conference with senior Travin Howard (130 tackles) and Summers (121 tackles). Howard said that with personal success, comes an opportunity to lead.

“When you make plays, and the stats are there, and you have all the people telling you this and telling you that, it just comes naturally,” Howard said. “Automatically, they look at you to be their leader, so you just have to take initiative and do your job.”

The secondary brings back four of five starters with the lone loss being safety Denzel Johnson. Senior Ranthony Texada and sophomore Jeff Gladney are primed to return as starters at corner, while senior Nick Orr and sophomore Niko Small are back at safety. Junior Ridwan Issahaku was listed as Johnson’s replacement at Strong Safety on the post-spring depth chart.

The biggest question mark is the defensive line, which loses Aaron Curry at defensive tackle and Josh Carraway, James McFarland and Tipa Galeai at end. The four combined for 19 of the team’s 41 sacks and 29 tackles for loss last season. TCU will have to look to far less experienced players to improve a run defense that gave up 185.8 yards per game a year ago.

“We weren’t happy with the defense,” Patterson said when asked about improving the run defense up front. “We went out and recruited four tackles and three ends and got bigger.”

Among the newcomers at tackle are Corey Bethley, George Ellis III and Ezra Tu’ua, all of whom weigh more than 290 pounds.

TCU will also rely on other big men in the trenches like redshirt-freshman Ross Blacklock and junior Joseph Broadnax, both of whom weigh over 300 pounds, along with smaller, more experienced tackles like L.J Collier and Chris Bradley.

“By having dudes that can go in there and just take on double teams and fill gaps, that enables [the linebackers] to hit our gaps quicker,” Summers said. “We can move around with ease, knowing that guards and tackles aren’t going to be coming up and cutting us off every single play.”

At end, the Frogs return senior Mat Boesen along with highly-touted 2016 recruits in Brandon Bowen, Gary Overshown and Isaiah Chambers. Junior transfer Ben Banogu was listed as a starter on the post-spring depth chart while freshmen Dennis Collins and Terrell Cooper, and junior college transfer Michael Epley will battle for rotation spots in their first year on campus.

“I’m excited about Banogu; I’m excited about the potential we have to grow up with this group,” Patterson said of a new-look defensive line. “You lost three guys, but our linebackers have gotten bigger, and you get Montrel Wilson back.”

Summers spoke about the uncertainty of what the linebacker rotation will look like with the return of Wilson and the addition of three new linebackers.

“There’s so many different ways that this could go,” Summers said about the rotation. “I couldn’t even really guess, but I know that we are going to have guys that are all athletic, that all can play. We are just going to be pushing each other and whoever is the best two are the two who will start. The next best two will be the ones who will be the backups and rotate in.”

The Frogs will begin their run at a bounce-back season Sept. 2 at 7 p.m. against Jackson State at Amon G. Carter Stadium in Fort Worth.