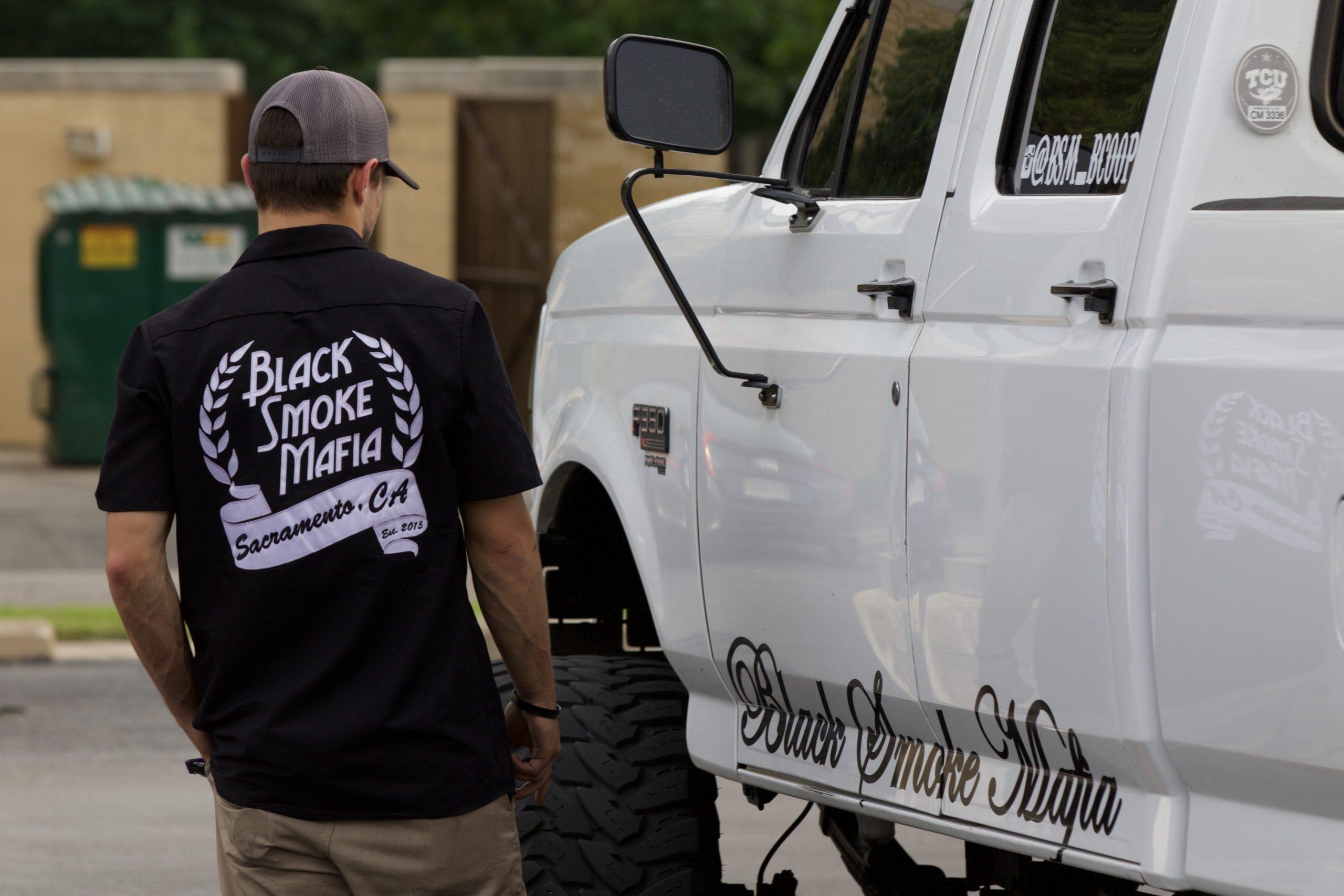 It might seem more suited for ranch work, but senior finance with real estate major Brogan Cooper uses it to get around Fort Worth.

Cooper said he and some friends started a truck club back home in Sacramento, California, called Black Smoke Mafia in November 2014 as a fun way to capture their love for trucks. What they thought would be something just for them turned into something much bigger than they expected.

I rode over with him to Trinity Park underneath I-30 and interviewed him to see what it was all about.

(This interview was edited for length and clarity)

Kitchin: So Brogan, what’s the story behind Black Smoke Mafia?

Cooper: Me and my buddies started an Instagram page called Black Smoke Mafia. Originally, we just had intentions to have a few buddies, kind of post a few truck pictures on it to see if we got any interest off of it, but in two years we’ve actually got up to right around 20,000 followers now.

Kitchin: How did you get into trucks?

Cooper: My best friend had a truck when he was in high school and we both spent a lot of our time during the summer working on it and so I kind of developed a passion through him, and then from there all of our friends kept building on it, and we just started building more and more relationships with people who enjoy building trucks.

Kitchin: What exactly does Black Smoke Mafia do?

Cooper: Initially, like I said, it just started as just the Instagram page. From there we started hosting [truck] meets and after that, we would do events where you could show the performance of your truck where we would have truck-pulls and drag races. Then we started selling our own apparel – shirts, tank tops, sweatshirts, hats, and a lot of people wanted stickers for their trucks believe it or not – there’s a big market for those – and it kind of grew from there. We also started hosting some charity events especially during winter time like toy drives. It’s pretty awesome that we can get a community of people behind truck events to do something good for the community.

Cooper: Right. It’s more of a club where we all share the same passion and we’re just trying to extend it as far as we can. I rep Black Smoke Mafia wherever I go. I have people, whether I’m in Texas or California, always asking me for a sticker or a shirt or something. We try and make a little bit of profit off of it, but for the most part, it’s just for fun.

Kitchin: What’s it like driving around in your truck?

Cooper: It can be a pain. It’s a lot of work to actually drive it. It’s a five-speed manual transmission so it can be a pain knowing that the clutch is actually the size of a clutch for a big-rig so it’s really heavy. It also doesn’t turn very well when it’s in tight spaces so I have to be very conscious of where I’m going and parking for that matter. But as far as driving, I love it. I love the sound, I love the feeling of being in a truck and you can see everything when you’re up that tall so it’s kind of a good view from up there if you ask me.

Kitchin: What kind of reactions do you get from people and what do they say?

Cooper: I get about 50-50. I’d say half the people I talk to love it, and other people see me and they kind of just look away or they give me a look like ‘what’s this guy doing?’. But for every person that loves it, I think it’s well worth the other half that don’t.

Kitchin: Where do you find the space to park your truck?

Cooper: I park it at my house but it doesn’t fit in my driveway, it kind of goes onto the grass. At school, I try and park it in the Sandage lot that’s a little bit away because there’s not many people over there but I can squeeze it in some tight spaces if I have to.

Kitchin: You said you like to keep your truck clean, so how do you manage to do that?

Cooper: For the first semester of this year, I actually was washing it once a week at the house by hand and my roommates kept getting upset about the fact that the water bill kept increasing every month, so now I have to take it in every week and pay. It’s taken a little bit out of my bank account but other than that, I like to keep it clean and looking nice while it’s going down the road. I want it to be the best representation of Black Smoke Mafia that it can be.

Cooper: Diesels actually get good gas mileage but all the modifications done to this truck have actually dampened the fuel mileage on it. It gets about seven to eight miles per gallon.

Kitchin: What’s the most unique story about your truck?

Cooper: It was actually given away as a prize to somebody. This truck was built by a company called DieselSellerz, they’re out of Utah. They are the biggest diesel company in the world and every three months, they do a giveaway and this was the first giveaway truck they ever did. It was given to a kid that lived 10 minutes away from where I lived back home. It actually had a lot of issues when he first got it and he didn’t want to deal with them, so I bought the truck off of him and I’ve been fixing and dealing with the issues. Ever since I saw the truck when he had won it, I had always wanted it because it’s my favorite looking truck and so when the opportunity arose that he was selling the truck, I jumped on it right away. I’ve just been trying to amp it up and make it better in every aspect and I’ve got more plans for it coming up too.

Kitchin: What’s your favorite part about your truck? 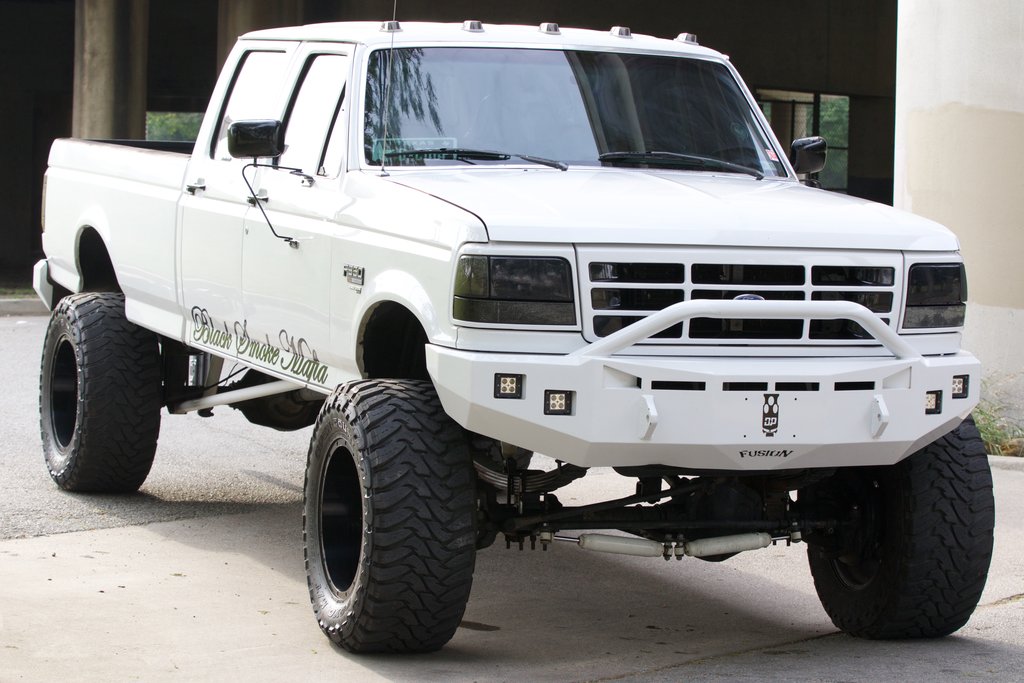 Kitchin: How do want to see Black Smoke Mafia grow in the future?

Cooper: If me and my friends were able to continue to grow this company and start doing more work as far as performance-wise, I would just make sure that my quality of work is good.