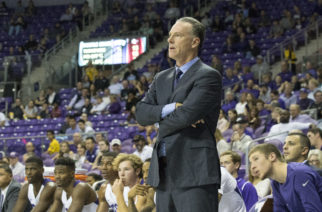 print
When head basketball coach Jamie Dixon organizes his regular 10 a.m. meetings before team practices, he said he always has the same two items at the top of his agenda: academics and compliance.

“Those are the first two things we talk about and then we move on to practice, recruiting and other things,” Dixon said Friday before the Horned Frogs first official practice as the team prepares for its season opener Nov. 10.

After news broke last week that the Justice Department had charged 10 people, including four assistant coaches and an official with Adidas, in connection with bribery and fraud, Dixon said he talked with his staff again.

He said he is “quite comfortable” that his staff has nothing to hide from the investigation.

Louisville effectively fired coach Rick Pitino and athletic director Tom Jurich Wednesday, a day after the FBI announced the arrests. Oklahoma State and Auburn have each since fired an assistant coach who was arrested.

Dixon said he asked his coaches to disclose anything he might need to be aware of in light of the FBI investigation.

“We continue to lecture our guys about never going down that road because there are challenges out there every day,” Dixon said. “Every day we face some kind of decision that we have to make a choice.”

Patrick, one of TCU’s top recruiters, said staying away from people outside of a recruit’s inner circle helps eliminate risk.

“I think first and foremost anywhere you try to recruit the kid, the parent, the high school coach, and if you can cover those bases, you don’t have the outside people coming into play,” Patrick said. “I think we try to do a good job here to try and know the kid, get to know the parents and the high school coach, and usually when you do that, good things happen from there.”

Dixon enters his second season at TCU. Last season, he led TCU to a school-record six Big 12 wins, two wins in the Big 12 tournament, including one over top-ranked Kansas, and its first NIT championship.

He is a part of the board of directors of the National Association of Basketball Coaches and is on two NCAA basketball committees.

“I think we’ll see improvements,” Dixon said. “I think it’s a good day, to be honest. I think some things will get cleaned up and talked about.”

However, he remains on high-alert to ensure his program continues to play by the rules.

“I think you can’t walk around with an arrogance and think it can’t happen at your place,” Dixon said. “It can happen anywhere.”