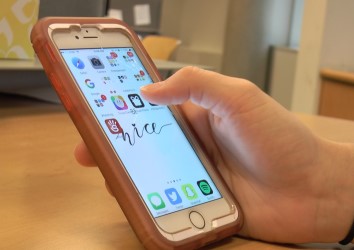 Dings, buzzes and clicks were some of the noises that stopped Emma Beebe, sophomore engineering major, from focusing in class last year. Now, she uses a new app which has improved her academics by taking away outside distractions.

“While the professor lectured, my phone would always ding with text messages or notifications,” Beebe said. “It was hard to focus because I would sneak texts under the table or be tempted to check social media.”

But now, those noises are silenced and Beebe no longer has the urge to be distracted by her phone. Instead, she is incentivized to stay off her phone by Pocket Points, an Apple and Android app that rewards her with free food and store discounts if she locks her phone while on campus.

The app was created by two Chico State in Northern California students in 2014 because they noticed so many people on their phones in class. Since then, hundreds of universities and companies have worked together for students to use the app on their campus.

Basically a student will download the app, open the app in class, lock their phone and start earning virtual points. With these virtual points, students can redeem their points for discounts and free deals at local restaurants and stores.

Here are some places around Fort Worth that accept points:

Beebe said her favorite place to redeem her points is Toppers.

“Toppers is so close to campus, and with 300 points I can get a free pizza with one topping,” she said. “I usually get pineapples.”

Locking a phone seems pretty simple to earn free food and discounts, but here’s the catch. This app uses “geo-fencing” (A GPS “fence” around the campus), Nelson said. So, the app will only lock a phone and begin earning points if the user is in an academic building. Once a user leaves an academic building, the user can no longer earn points, and Snapchatting, texting and alerts can commence.

Nelson said the app goes into every academic building on campus, even the Mary Couts Burnett Library and Rees-Jones Hall.

Because this app works in all the academic buildings, Beebe said her grades and class participation have been improving.

Her professor, Mike Harvillle, said classroom engagement and participation has not been a problem for him because he doesn’t allow his students to use their phones in class.

“I put no phones on the syllabus to keep them engaged in class,” Harville said. “I try to keep everyone engaged in class by constantly giving responses with questions and calling certain parts the room.”

Beebe said college is a struggle because she has to get good grades, eat food and have money, so she appreciates the app’s ability to help her balance her priorities.