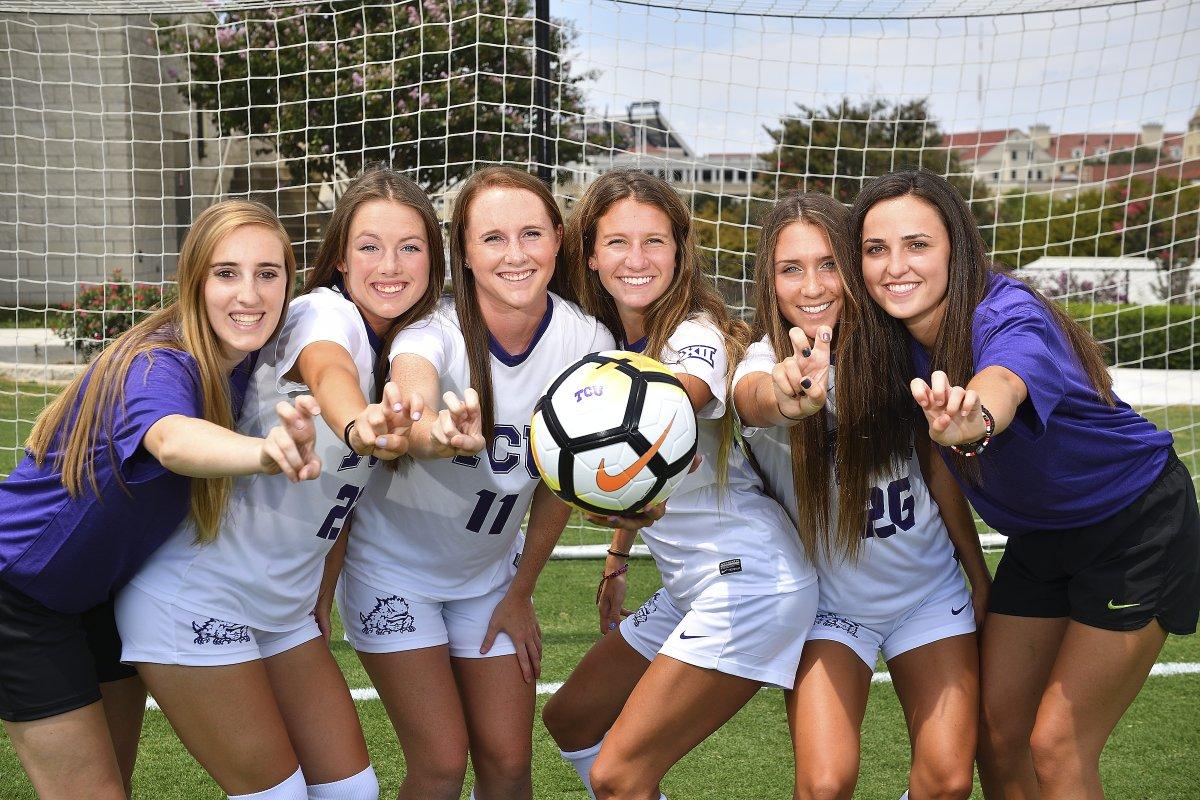 print
A 1-0 overtime win against Iowa State in Ames Thursday Oct. 19 served as a culmination of all of TCU Soccer’s efforts throughout the season. Head coach Eric Bell’s praise of the team’s defensive dexterity and offensive accomplishments served as a marker for the team’s consistent improvement.

The win vaulted the Frogs into the top three in the Big 12 conference standings.

Although hidden from the players, the win also marked the 39th career victory for the class of 2017, surpassing the previous record of 38 wins set by the senior classes of 1989 and 2000.

The four members of the senior class, forwards Emma Heckendorn and Allison Ganter and defenders Ryan Williams and Tanner Wallace were baffled by the statistic.

“That’s awesome to hear, I actually did not know about that,” Ganter said. “It means that this program’s growing. A lot of my classmates came here to build the program, so the fact that we’ve been able to turn it around and make progress is awesome.”

Ganter, a two-time first-team academic all-conference performer, has been a staple on offense in her four year tenure in Fort Worth. The Dallas native has made a dent in the record books; she is tied for ninth all-time in goals and total points with scored with 17 goals and 44 points.

Heckendorn has also rewritten the record books during her time at TCU. She is a three-time All-Big 12 academic honoree and a two-time Big 12 All-Conference performer. She became the all-time leader in assists, 20, this season and she set the single-season assist mark as a junior with nine. Heckendorn has notched 50 points during her tenure, good for seventh all-time.

Williams has shown endurance throughout her career as a Frog. She has started in 74 of a possible 75 games, totaling over 6,600 minutes of action. Williams was a member of 2014 Big 12 All-Newcomer team, a three-time academic all-conference performer, and currently ranks fourth all-time with 15 career assists.

As the careers of these four senior players draws to a close, each player cited the wonderful learning environment that TCU and Coach Bell foster.

“As a soccer player, TCU has given me more opportunities to get better,” Williams said. “I’ve been able to talk one-on-one with the coaches about ways to improve my game and playing in a competitive environment has grown me into the player that I am today.”

Williams mentioned her difficulties in the transition from a follower to a leader, but thanked Bell for his guidance to ease her in the process.

“I’ve definitely had to learn to become a leader,” Williams said. “I didn’t expect to be voted captain during my junior year, and I didn’t necessarily want to be captain. Looking back, I’ve been able to be more aware of my teammates instead of just myself and bring the team together during tough times.”

Freshman defender Tijana Djuricek thinks of Williams as both a mentor and a friend; someone she both leans on and trusts. Williams is grateful to have that big of an impact on her peers.

“It’s shocking because I still don’t think of myself as an awesome leader, but it’s awesome to hear that she’s enjoyed me as a leader and I will miss her,” Williams said.

Besides being excellent leaders, Bell said that all of the members of the class bring different characteristics to the table, but one common quality that they all bring collectively is a dedication to the team.

“Each member bought into a vision that we prescribed a long time ago,” Bell said. “We didn’t have anything to show them but us, and they bought in. They were a part of last years success and are a huge part of what we’re doing this year.”

As the amount of guaranteed games for the Frogs continues to dwindle, Heckendorn continues her leadership techniques by further investing in her younger teammates hoping for a positive breakthrough.

“I’m focusing on investing in my teammates and helping younger teammates grow and learn you have to make the most of college while you can,” Heckendorn said. “Making memories with my teammates and enjoying it while it happens is the main focus.”

Bell said that the future of TCU Soccer is in great hands because of the actions of the class of 2017.

“They’ve laid down the foundation for our future, and the future is quite bright,” Bell said. “They’ve done all the hard work to a point to where we are able to attract better players.”

The four members of the class of 2017 will be honored Friday night as the Horned Frogs host the Baylor Bears at Garvey-Rosenthal Soccer Stadium. Kick-off is set for 7:00 p.m. and will be preceded by a short ceremony for the seniors.

Football gets back on track with well-rounded win over Kansas