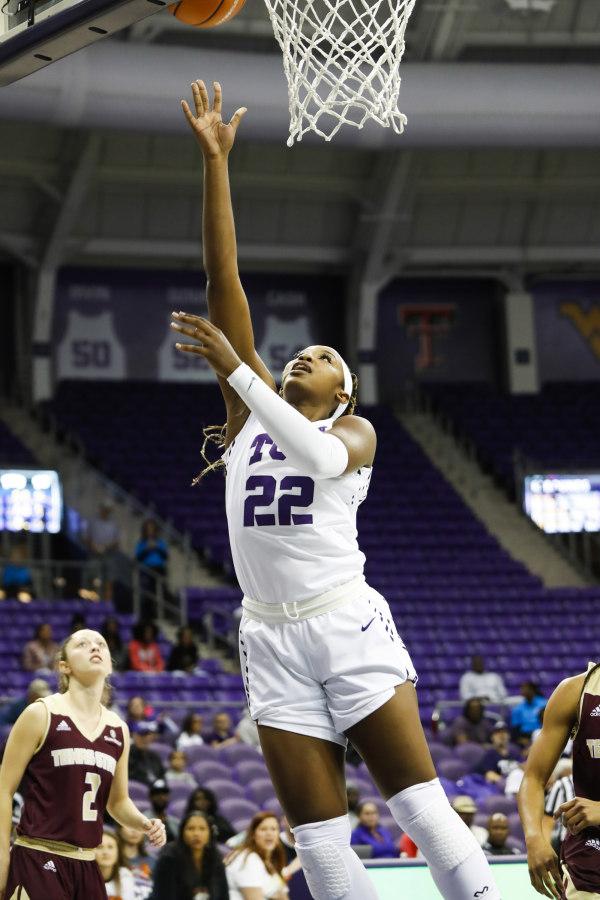 The Bobcats came into Fort Worth following a 17-point victory over Texas Tech in Lubbock.

“They’re a great team and are very well coached,” head coach Raegan Pebley said. “We knew that no lead would be safe against this team because of their ability to hit the three-pointer. I’m very proud of the team’s execution of the game plan on both ends of the court. We had consistent contribution from a lot of players.”

TCU matched their paint-scoring total in the second quarter, adding an additional 14 post points to their scoring totals. Moore continued to dominate the Bobcat’s interior defense, tallying eight total points in the quarter to push her total to 14 entering the halftime break.

Pebley believed that the excellent post play set the tone for the rest of the game.

“Whenever Jordan or Amy is able to get going early in the post, that play becomes contagious throughout the program,” Pebley said.

Turnovers plagued the Frogs in the second quarter. Four turnovers in the quarter and seven total in the half led to seven points off the turnovers for Texas State and kept the Bobcats within striking distance. The Frogs led 36-29 after 20 minutes of action.

The Frogs asserted their dominance and began to pull away from the Bobcats in the third quarter. Moore and senior guard Toree Thompson led the charge. Texas State continued to prove to have no answer for Moore’s intimidating stature as she continued to rack up the points in the paint, totaling eight points, three rebounds and three blocks in the quarter. Thompson let it rain from behind the arc, draining four for 12 points in the third quarter. Strong play from both inside and outside the painted area gave the Frogs a well-deserved 21-point lead after 30 minutes of play, 68-47.

Moore finished the game with a career-high 28 points on 14-16 shooting as the Horned Frogs defeated Texas State 82-58. Moore’s 28 points are the most by a Horned Frog since Zahna Medley, TCU’s all-time leading scorer, recorded 31 points against UTRGV on Nov. 28, 2015.

TCU held Texas State to 28 percent shooting, including 6-29 from beyond the arc. The Frogs dominated in the post, outscoring Texas State 48-10 in the paint. The Bobcats scored two points in the paint in the second half.

“They run a very unique system that’s guard-oriented,” Pebley said. “They like to shoot the three a lot which will challenge us defensively. They’re concerning to me, it will be a very competitive game.”