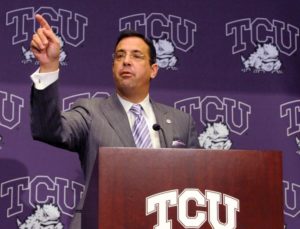 After eight years serving as the TCU athletic director, Chris Del Conte has taken the same role at the University of Texas.

Del Conte announced the move in a statement on Twitter, saying “the time has come to take on a new challenge.”

Del Conte will start Monday taking control of the Longhorn athletic department from current Texas AD Mike Perrin, who had been serving in an interim capacity since 2015.

TCU has seen a rise in athletic prosperity under Del Conte, who arrived in Fort Worth in October 2009. He led TCU into the Big 12 and led numerous renovations to athletic facilities including multi-million dollar renovations to Amon G. Carter Stadium, the facelift of Ed and Rae Schollmaier Arena and upgrades to Lupton Stadium to name a few. Del Conte also spearheaded a new campaign to secure funds to add more club seating at Amon G. Carter Stadium in November.