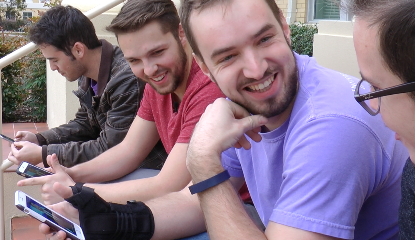 HQ Trivia players from around the world compete to win money by answering 12 questions.

“The prospect of winning money is awesome even if it’s unlikely and doesn’t happen often,” Hartley said. “Now, it’s just kind of fun to play it and try to win.”

Twelve questions may seem easy, but there’s a catch.

Players only have 10 seconds to answer the question, which makes it hard for contestants to cheat.

“If you have someone else with a computer and phone that quickly Google searches a keyword that could maybe help,” he said. “But it’s best to have as many people who know random stuff around you.”

But if they are wrong, they are eliminated from the game.

The questions get progressively harder.

“The first question is usually pretty clear-cut and you should know the answer,” Hartley said. “And then it slowly gets harder. By the time you get to question five or six, it’s pretty obscure. They can be about British actors from the 70s.”

She said HQ Trivia is a venture-backed company, which means companies or private investors invest money into the game.

The game launched in August and since then there has been a record high of 1.6 million players in one day, Alsterklint said.

HQ Winner
Out of the millions of contestants who play, Hartley is one of the few who has actually guessed all 12 questions correctly and received money.

“That night it was an $18,000 jackpot and 300 people won that night,” Hartley said. “So I got $60 because the winners split the pot. My family was around me when I won and thought it was really weird, but I was really excited.”

Technology addiction
With millions of contestants, the game is pretty intense, Hartley said.

“I get a little stressed out if I don’t know the answers,” he said.

Not only is the game intense, but it can also be addictive for some players.

Caroline Albritton, program specialist for alcohol and drug education, said addiction can be destructive when it distracts someone from their daily activities.

Addiction impacts two parts of the brain: the frontal cortex and the midbrain, Albritton said.

“The midbrain is our survival instincts like eat, sleep, have sex and reproduce,” she said. “The frontal cortex is where we make decisions.”

Addiction begins when a person answers a question correctly and dopamine, a hormone that makes us feel happy, is released to the frontal cortex and leads players to associate playing HQ Trivia with happiness.

“It almost becomes a survival thing,” Albritton said. “Instead of ‘I want to do this, I want to play this game,’ It’s ‘I need to.’”

As of right now, Hartley said he’s not addicted, but is just in it for the fun and is trying to figure out where he will spend his $60.