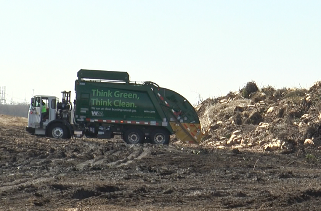 Some students living in the Greek Village are getting a chance to reduce food waste and boost the environment.

TCU’s chapter of the Food Recovery Network (FRN) has provided composting bins to five sororities in a pilot program that aims to convert waste into compost, which can then be used in community gardens. The five sororities participating are Alpha Chi Omega, Alpha Delta Pi, Alpha Omicron Pi, Delta Gamma and Zeta Tau Alpha.

TCU FRN has partnered with Cowboy Compost, a local organization dedicated to minimizing the amount of food waste entering landfills that collect the filled bins.

Megan McCracken, president of TCU’s chapter of the FRN, said although the project is starting small, the overall goal is to reduce the amount of food going to the landfill while educating students at the same time.

“Each sorority was given a composting bin that has been placed in their trash room,” McCracken said. “Then this composting bin is taken out every Friday, picked up by Cowboy Compost and replaced with a clean bin.”

Composting is the process of taking organic matter and decomposing it to the point where it turns into dirt, said Pete Smith, operations manager for Cowboy Compost.

Fort Worth residents looking to join in the composting can get a bucket at their home that is picked up every two weeks by Cowboy Compost, Smith said. People put their food scraps in the bucket and then at the end of the year, the composted soil is given back to residents to be used in their gardens or landscapes.

“You put something in and get something out but it doesn’t create anything negative on the backside,” he said.

McCracken said she hopes the project educates students and sparks their interests in environmental awareness.

Each sorority is required to attend an education event to understand what composting is and how to effectively implement the process in the community and their everyday lives.

“It’s not just about composting here,” McCracken said. “It’s about teaching our students to compost well beyond [TCU].”

Smith said expanding to college campuses is beneficial as it teaches positive approaches to reducing waste and preserving the environment.

“Driving environmental thought is the biggest thing,” Smith said. “It’s a mindset of not being wasteful and a thoughtful action to create change.”

At the end of each semester, Cowboy Compost will keep track of the weight of the collected compost and give the soil that was produced back to TCU FRN.

“Both of these organizations have some form of community garden,” McCracken said. “Our plan is to donate our compost soil back to the community.”

First-year students reflect on their first semester of college