Chancellor Victor Boschini said he would “absolutely” not release a proactive statement in support of immigrant students and students who are Deferred Action for Childhood Arrivals (DACA) recipients.

Boschini told the group he would not make a statement because the undocumented and immigrant students he talked to do not want him to. He said those students appreciated him not drawing attention to them and that they would tell people that Boschini is making them feel safe.

“I stand on my record,” Boschini told the group.

In an interview afterward, he said: “They’re trying to paint me like I don’t care about these kids, but I do. Talk to anybody who works with me. I just think the way I accomplish it is different from the way they want it accomplished. Of course, I think my way’s right and they think their way’s right. It’s hard.”

The activists wanted Boschini to answer four questions, according to the letter they delivered to his office:

Protest organizer and graduate student Mayra Guardiola did not agree with Boshini’s view that those immigrant students didn’t want Boschini to speak up. She said that Boschini needed to be proactive, not reactive on current legislation and to reassure DACA and immigrant students.

“So many of us are terrified,” Guardiola said. “We need to let them know as TCU members we are here to support them.”

The conversation grew heated at one point as the two sides clashed over their different plans for handling the issue with the protestors repeatedly asking Boschini to make a “diplomatic message” on behalf of the immigrant students. Boschini repeatedly refused, however, and told the student representatives in the meeting that they should continue their activism and that they can spread a message of support to those students who are concerned.

“You’re all trying to bully me into doing what you want,” Boschini said. “You have more reach than I have and more power than I have. There are 10,000 of you and only one of me.”

Organizer and Brite Divinity Student John Noble, however, said that he didn’t agree and thought that a message from Boschini would carry more weight.

Both parties were able to agree on the importance of promoting the resources available on campus for those who are concerned.

“I would say any student who feels threatened by this, go to the counseling center immediately and get help,” Boschini said. “There’s tons of places on campus you can get resources we could help you.”

Noble said he was thankful to Boschini for taking the time to meet with them but that he was “disappointed” by Boschini’s refusal to release a statement.

“We want this conversation to continue,” Noble said. “We need people at TCU to realize that, whether they’re administrators, students, whether they’re faculty; this is a crisis moment for immigrants, and has been for a long time in this country. Really strong action is necessary.” 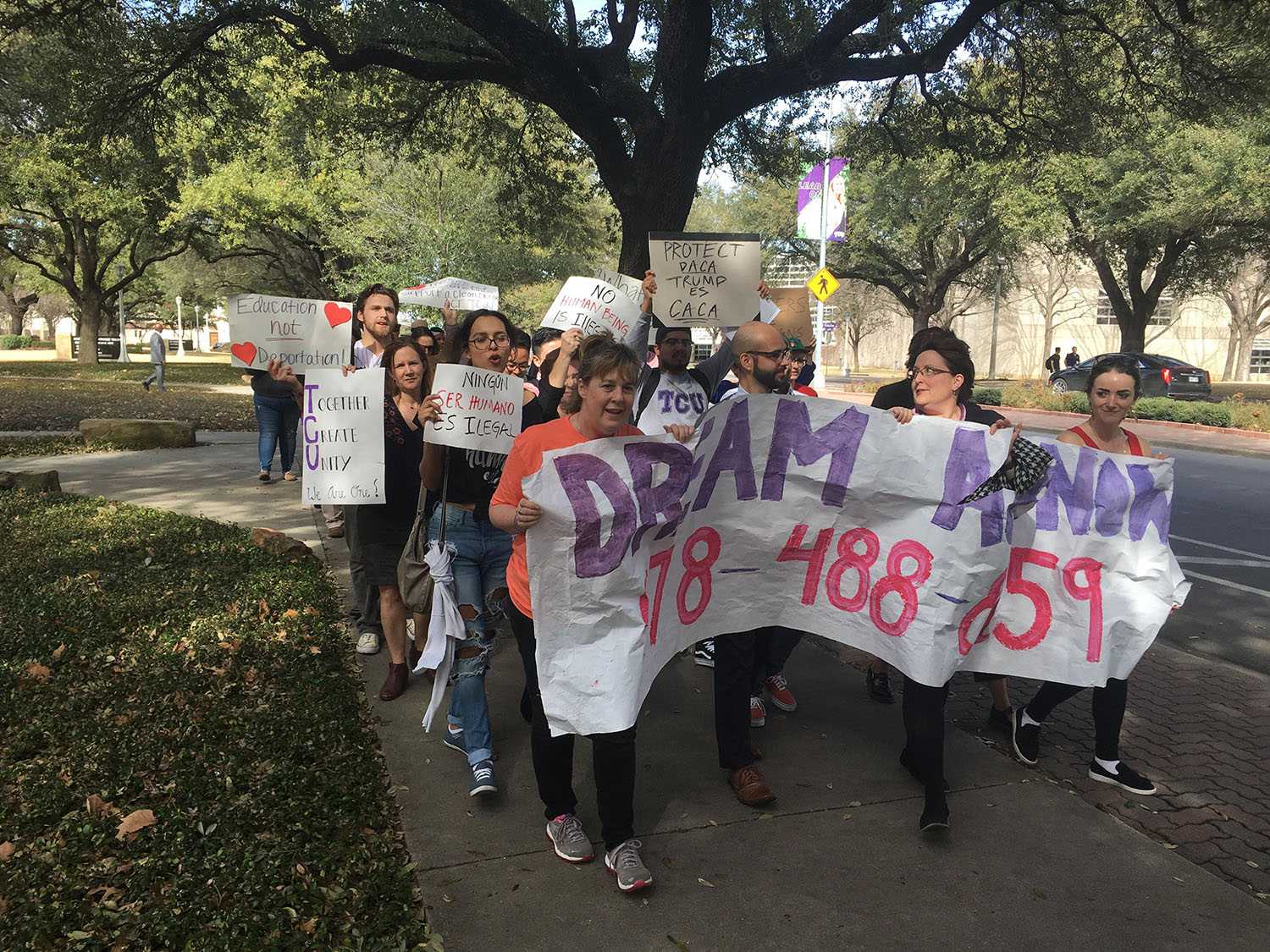 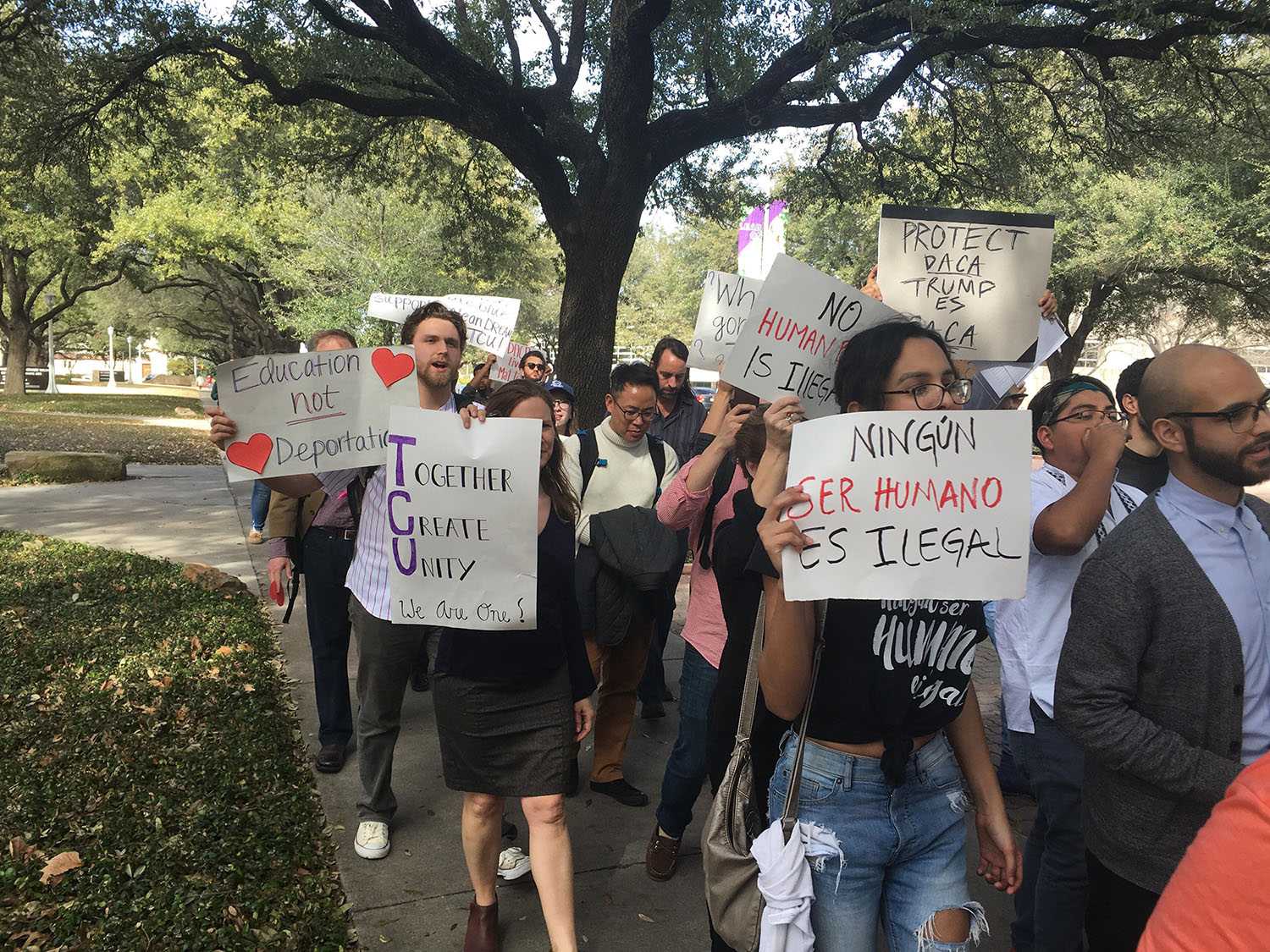 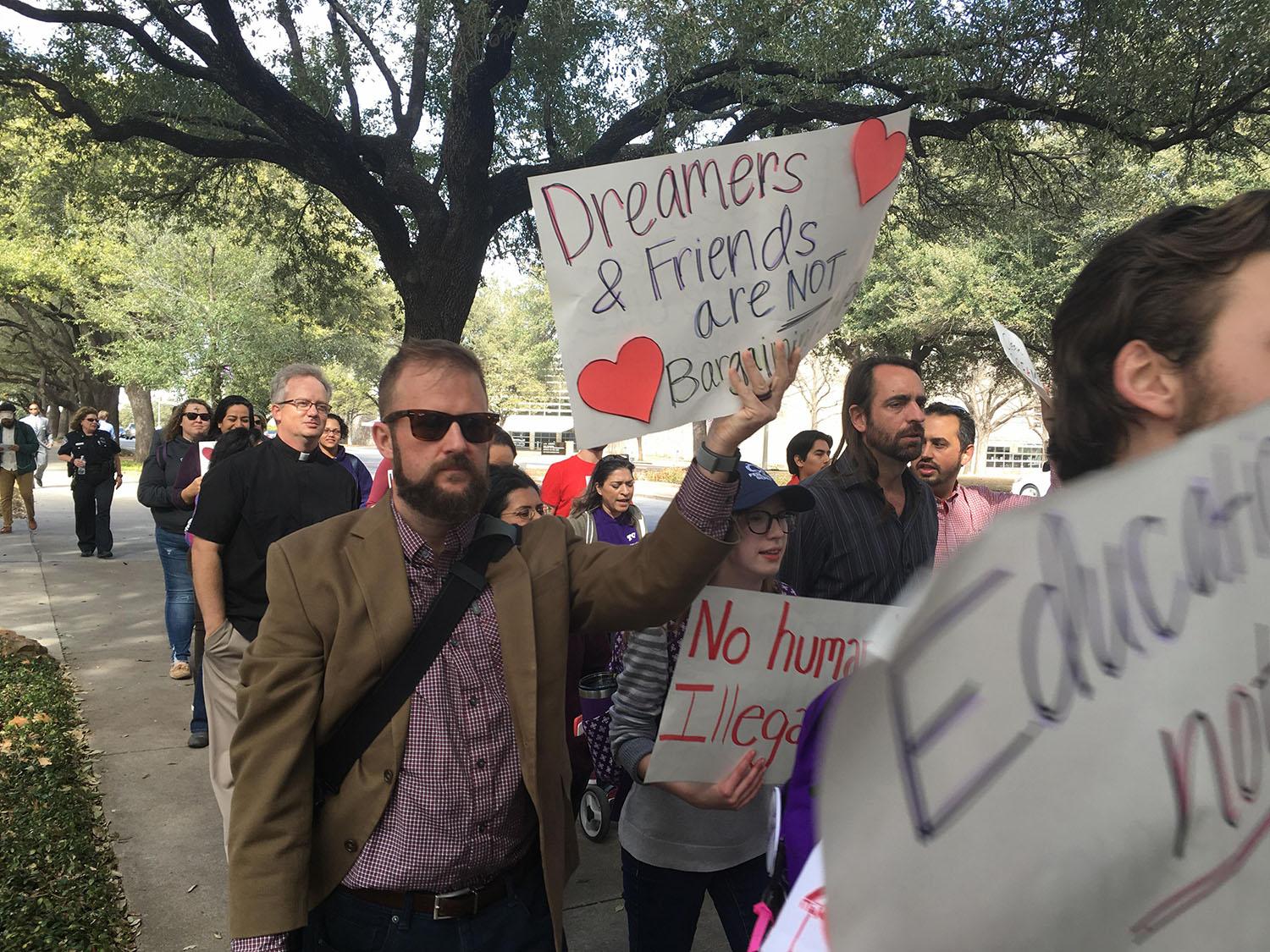 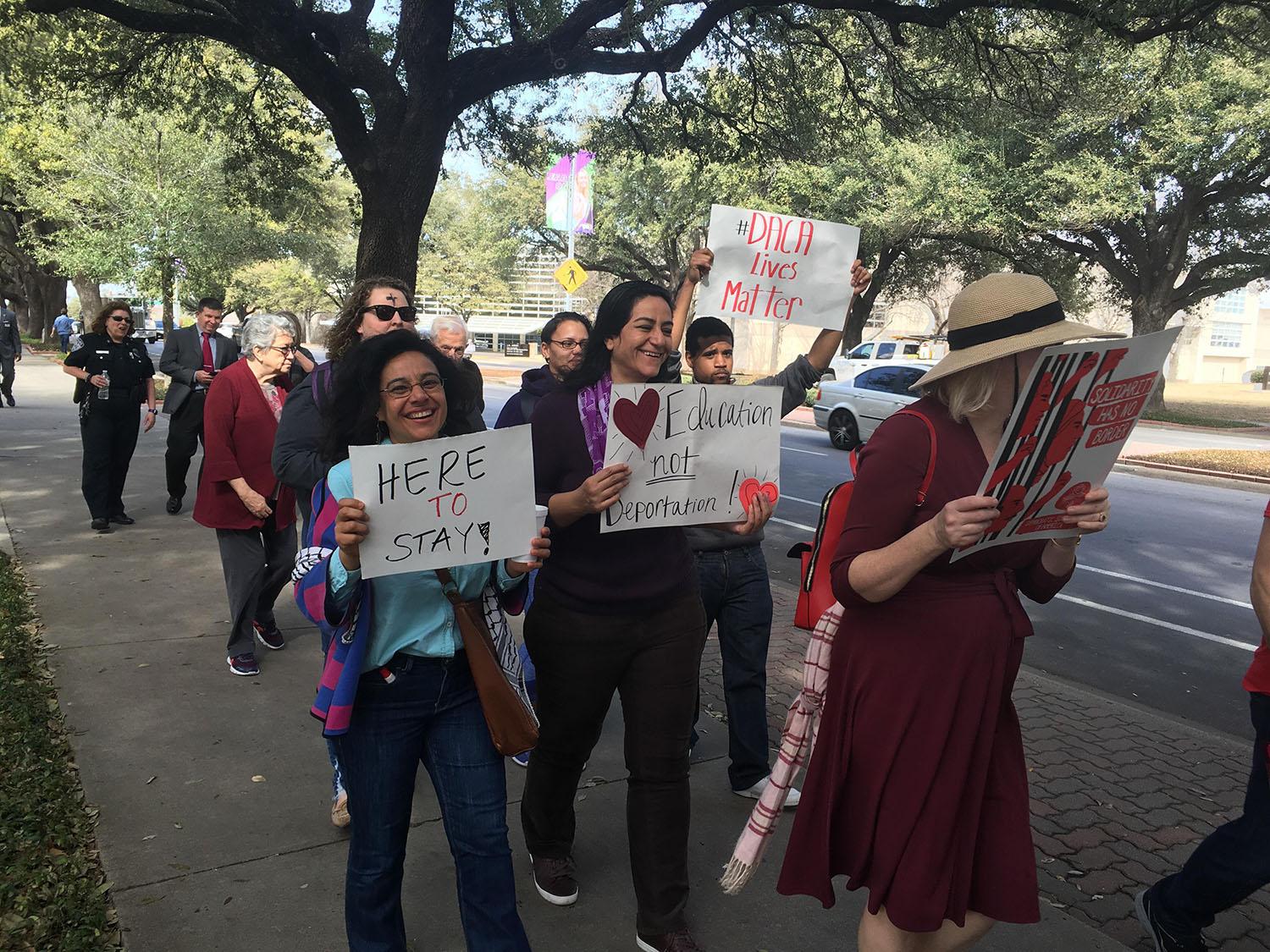 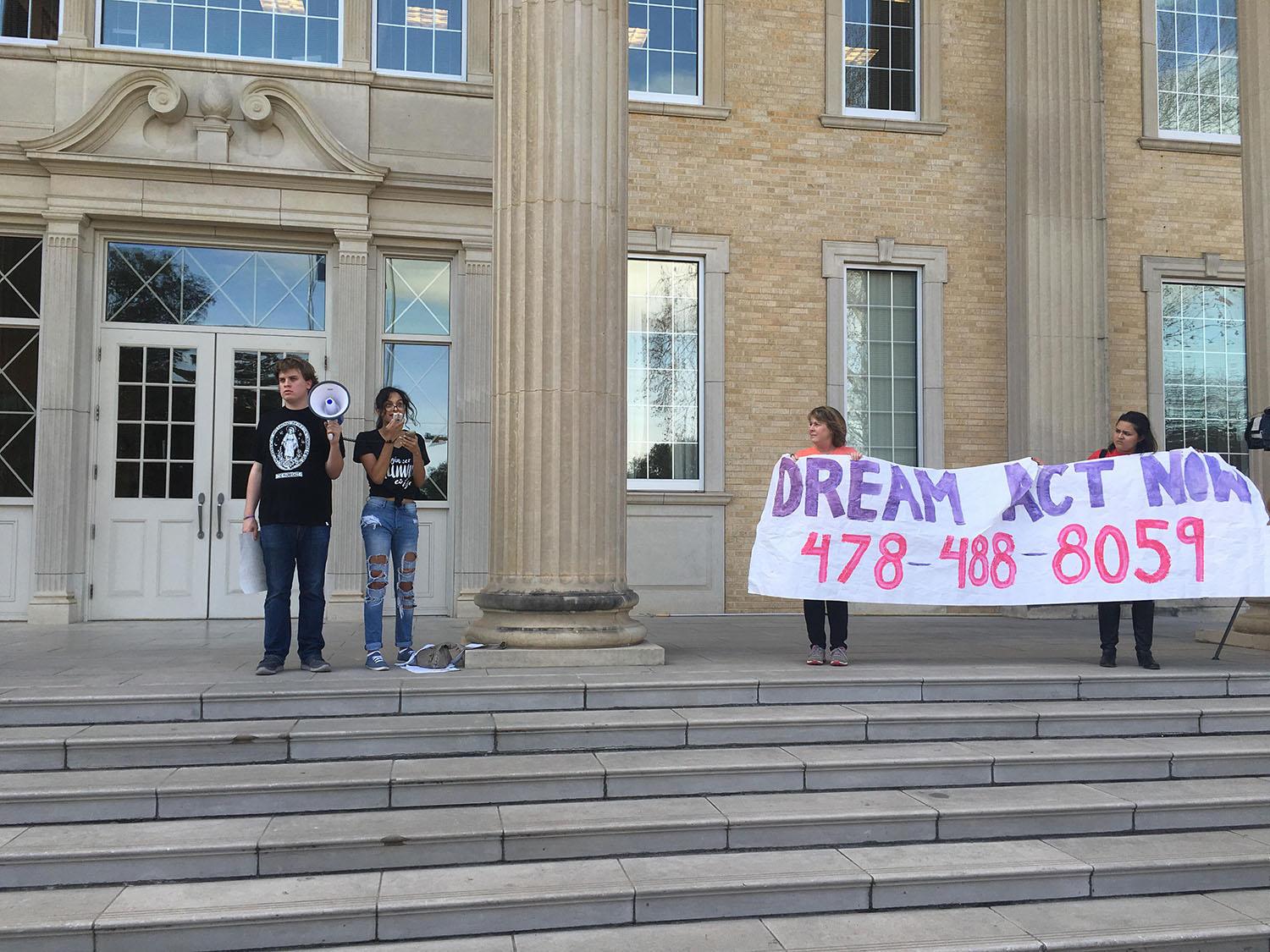 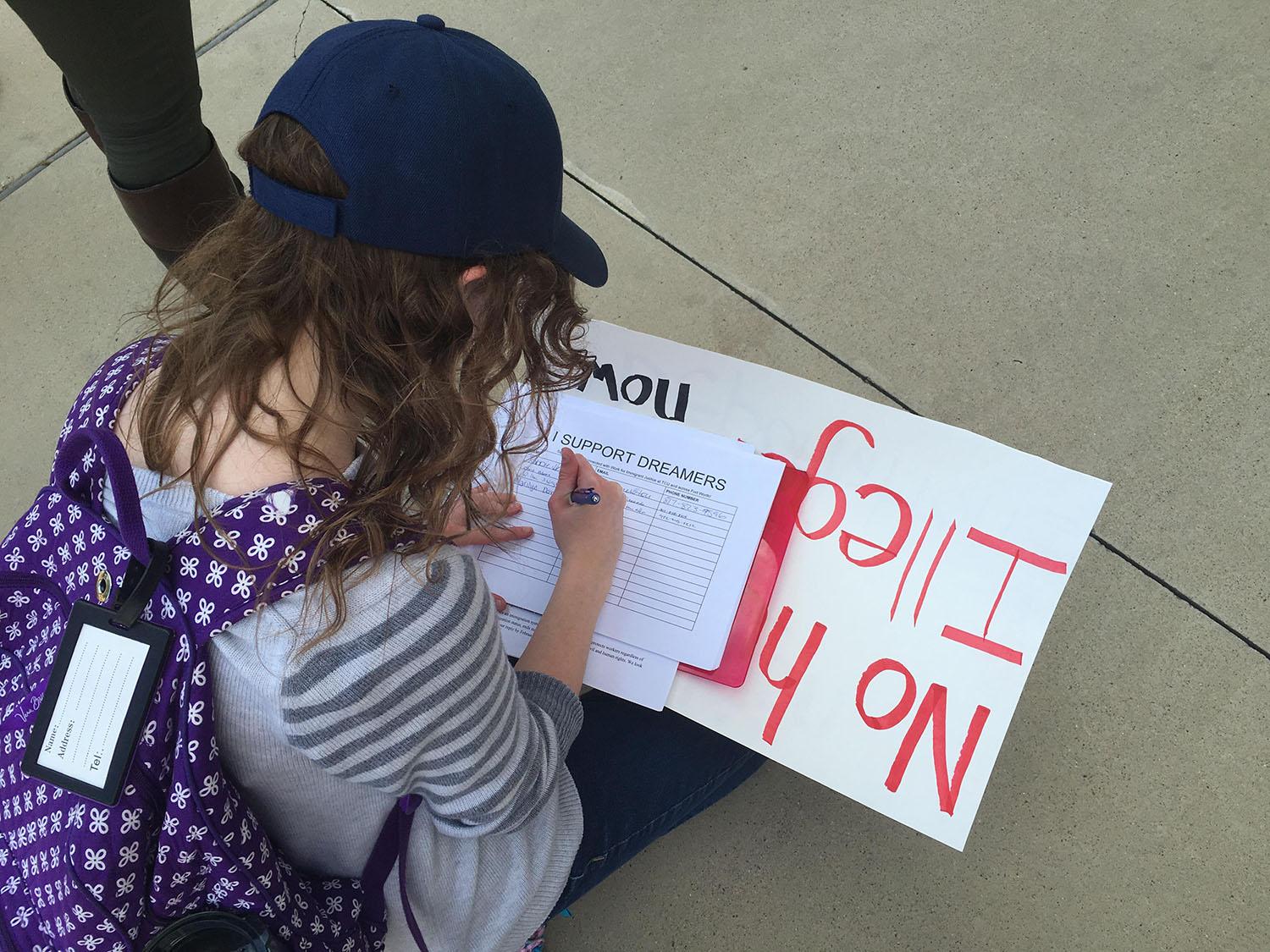 The conversation followed a march and rally that gathered together about three dozen people. The march started at the Founder’s statue, went down past Moudy and then back to end on the steps of Sadler. Throughout the march protestors shouted chants such as: “Trump, Abbott, Granger: they put immigrants in danger!” “Si se puede!” and “Ho, ho, hey, hey, immigrants are here to stay!”

Following the march, people gave speeches on the steps of Sadler to share their stories of immigrants they know and to voice their support for the immigrant community at TCU.

Noble said he was drawn to the rally to show the undocumented community they have support.

“No human being is illegal,” Noble said.

First-year student Marilyn Downing said she attended the protest looking to let TCU students who are DACA recipients know they aren’t alone, and to pass on her message to D.C. legislators.

Protestors were also given a phone number to call Congress in order to register their support for a clean Dream Act and a clipboard was passed around to collect signatures on the letters that were taken to Boschni and Rep. Kay Granger.

There was a brief interruption when a couple of male students walked by shouting, “Build the Wall!” however organizers responded by shouting, “Protect DACA, Trump is caca” and after a few rounds of that, the planned speeches continued.

Guardiola originally organized the protest to pressure campus and community leaders to support the clean Dream Act, a bill that would grant a pathway to citizenship for 2.1 million Deferred Action for Childhood Arrivals (DACA) recipients without any border security stipulations. 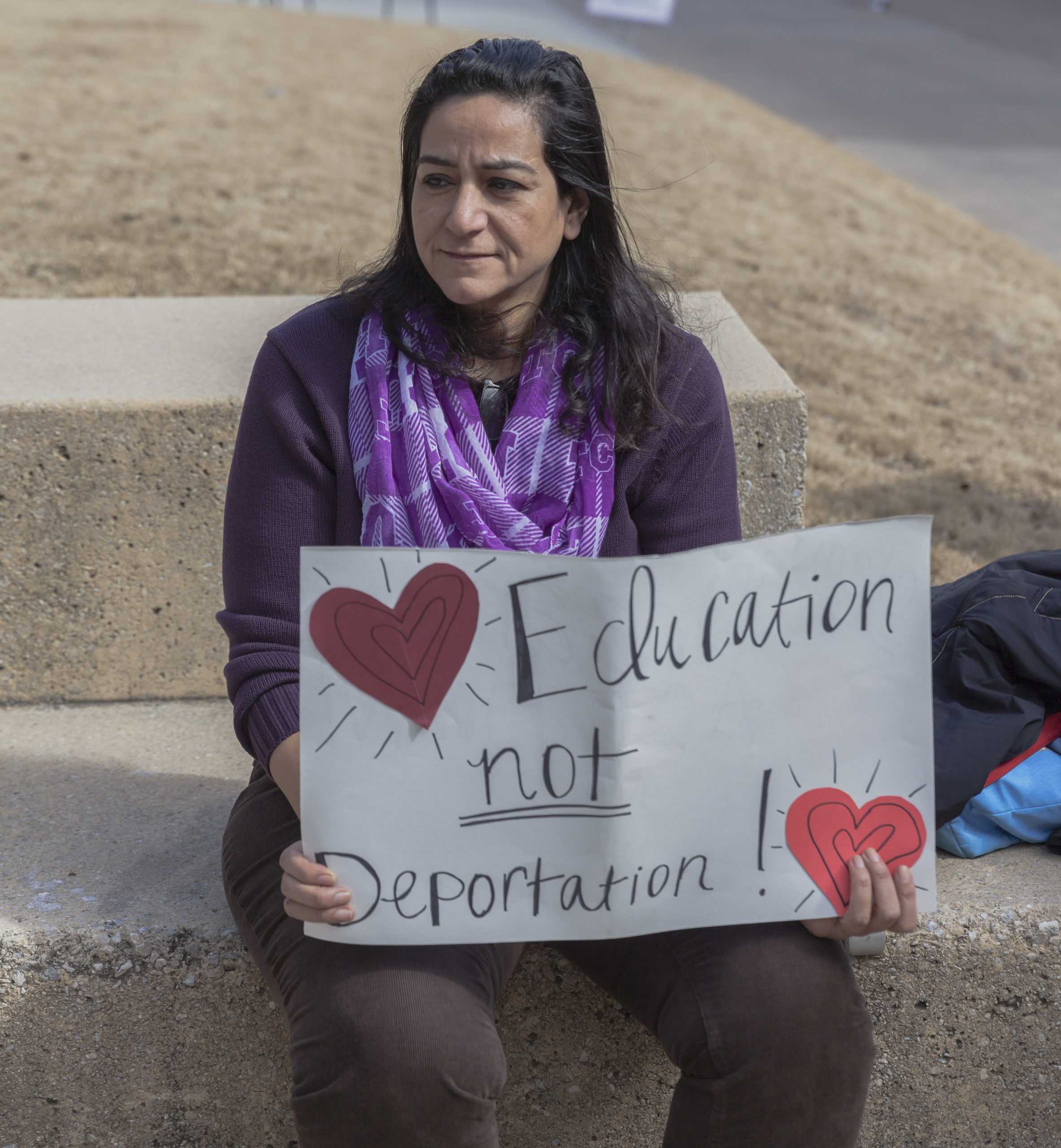 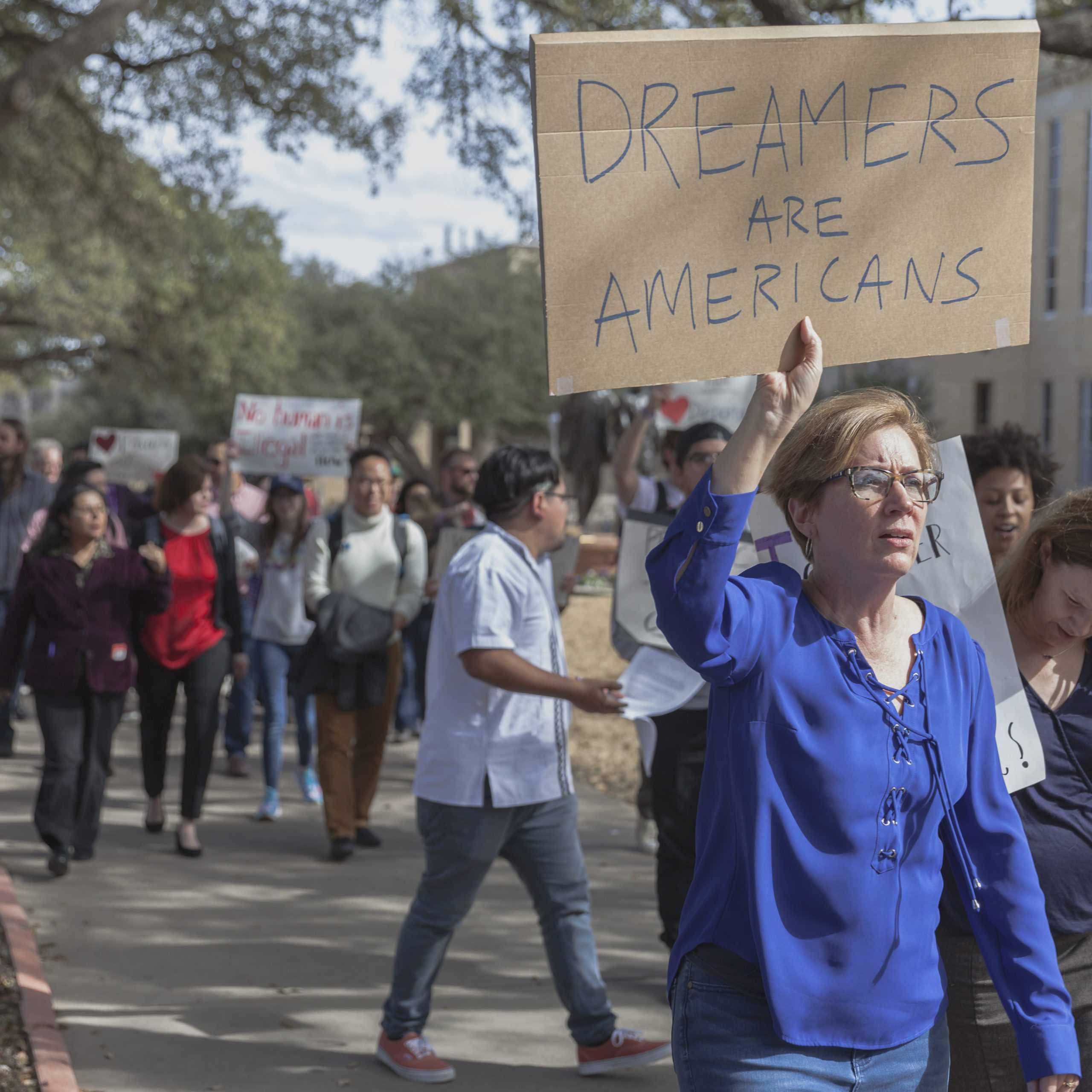 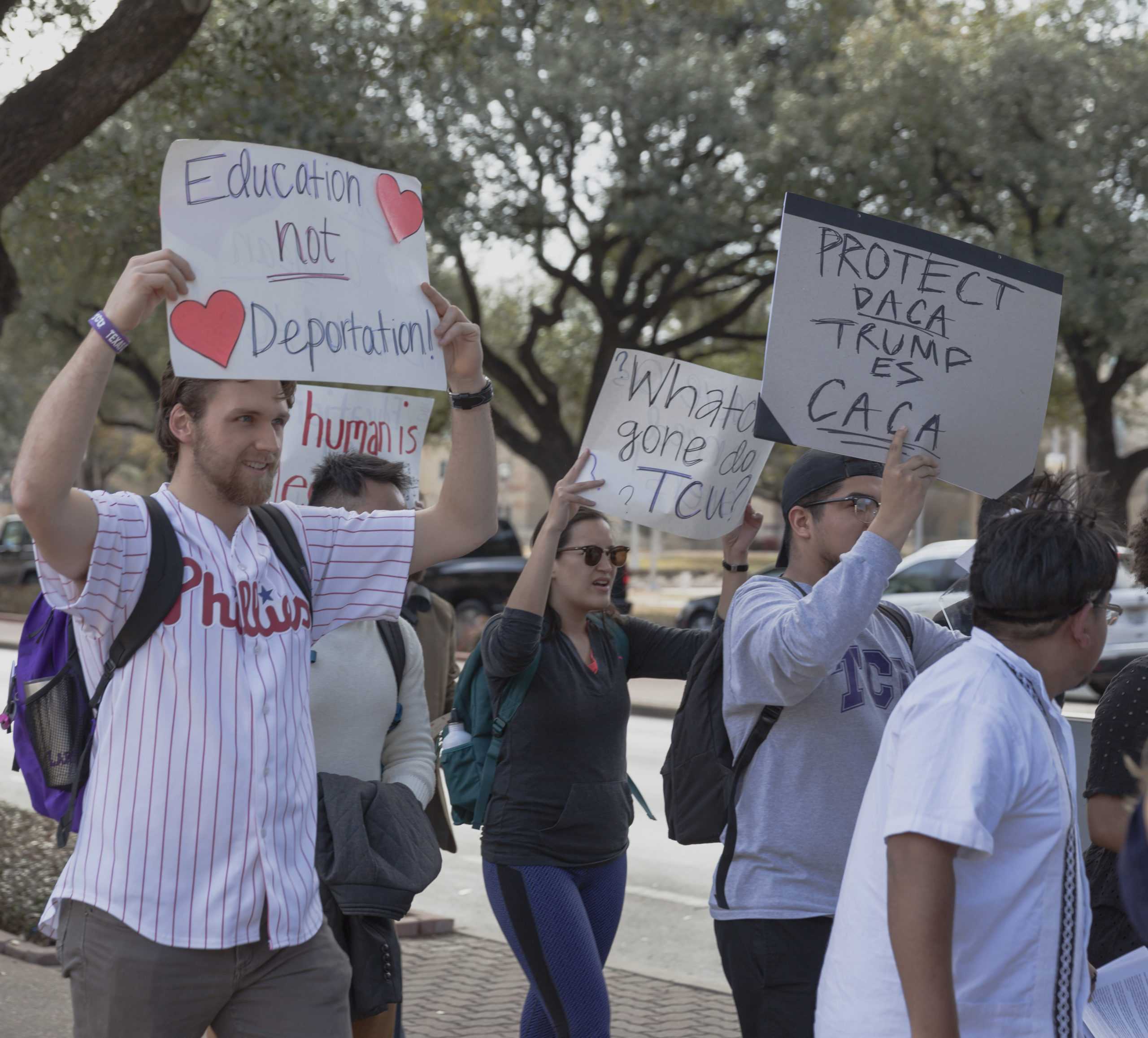 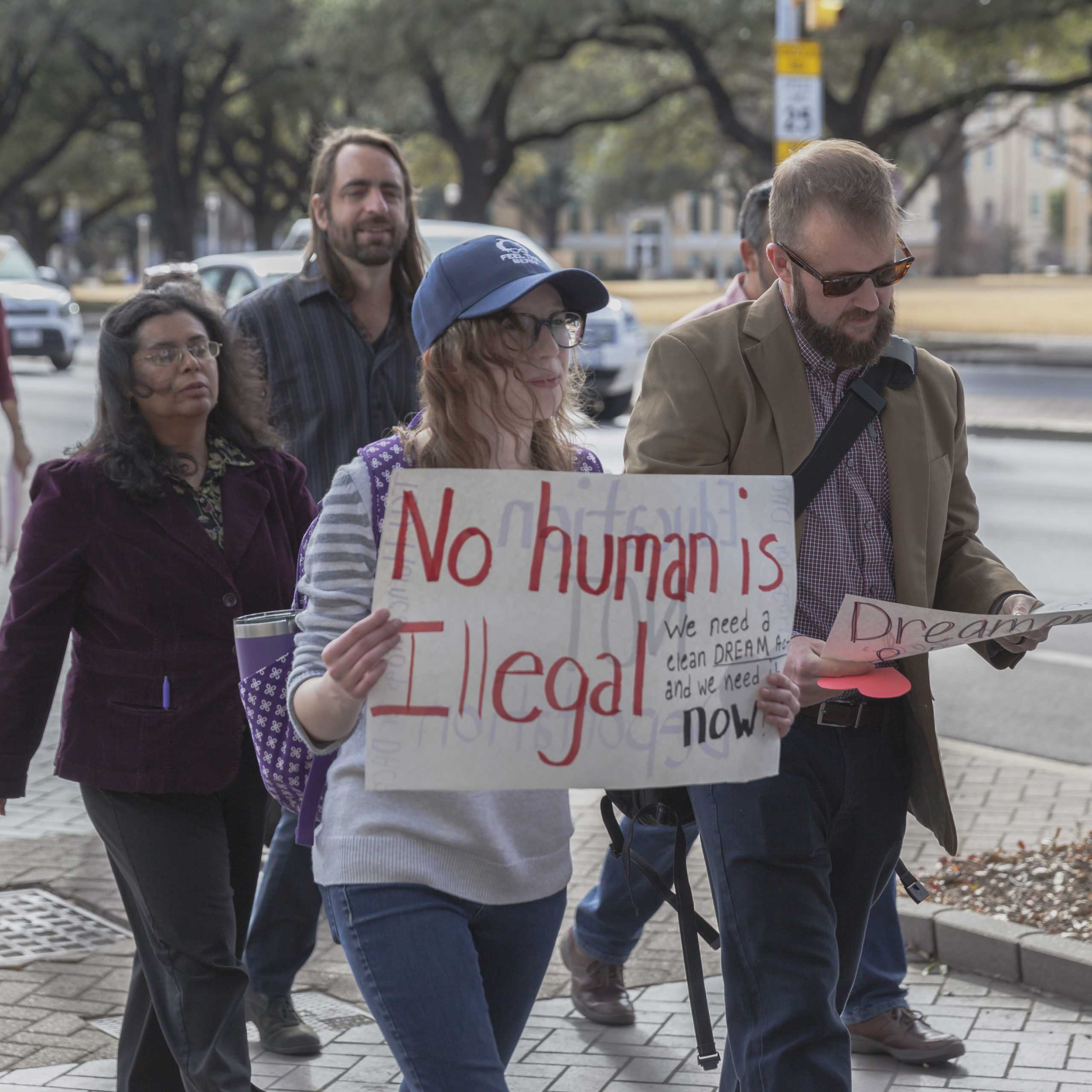 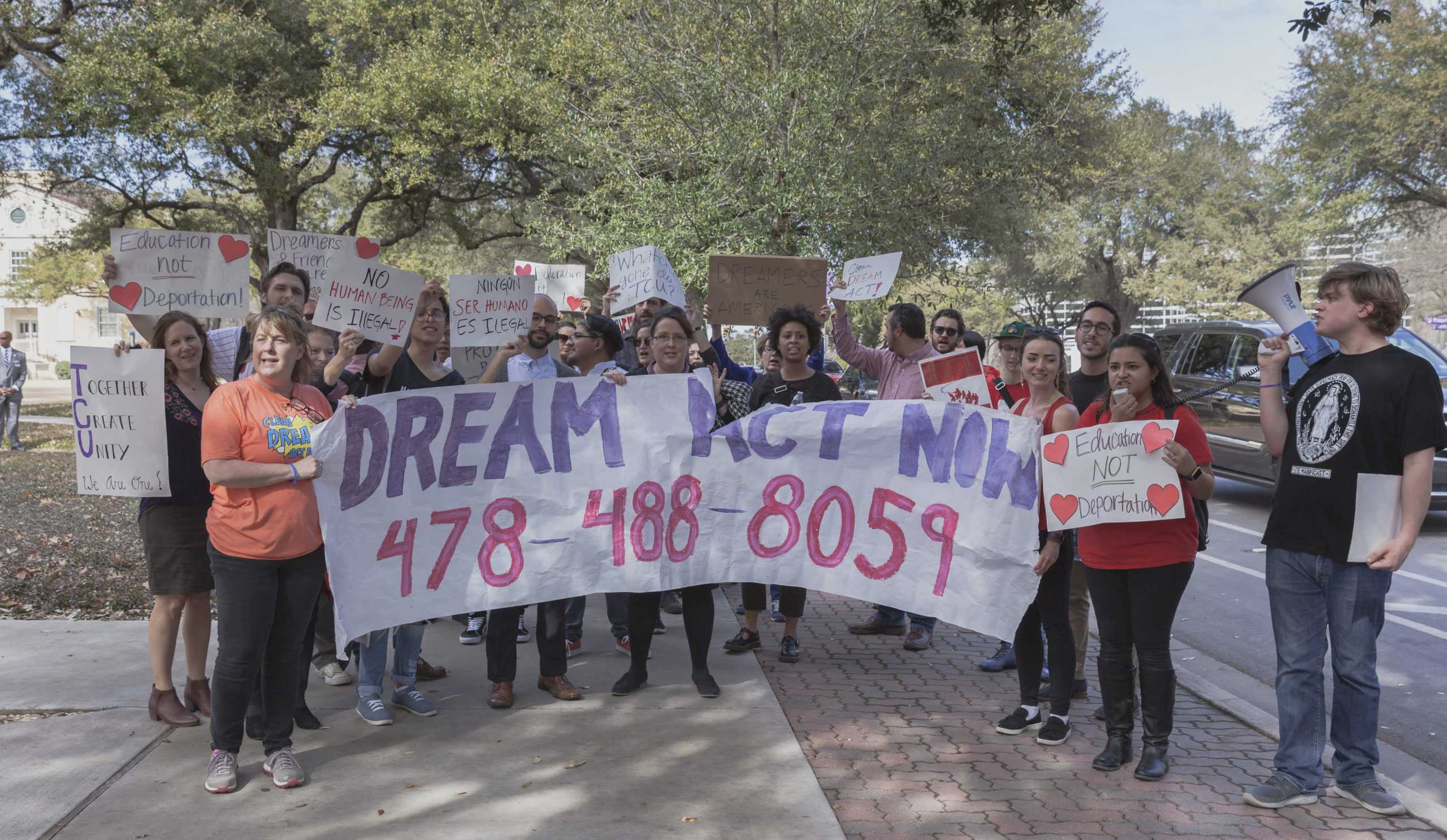 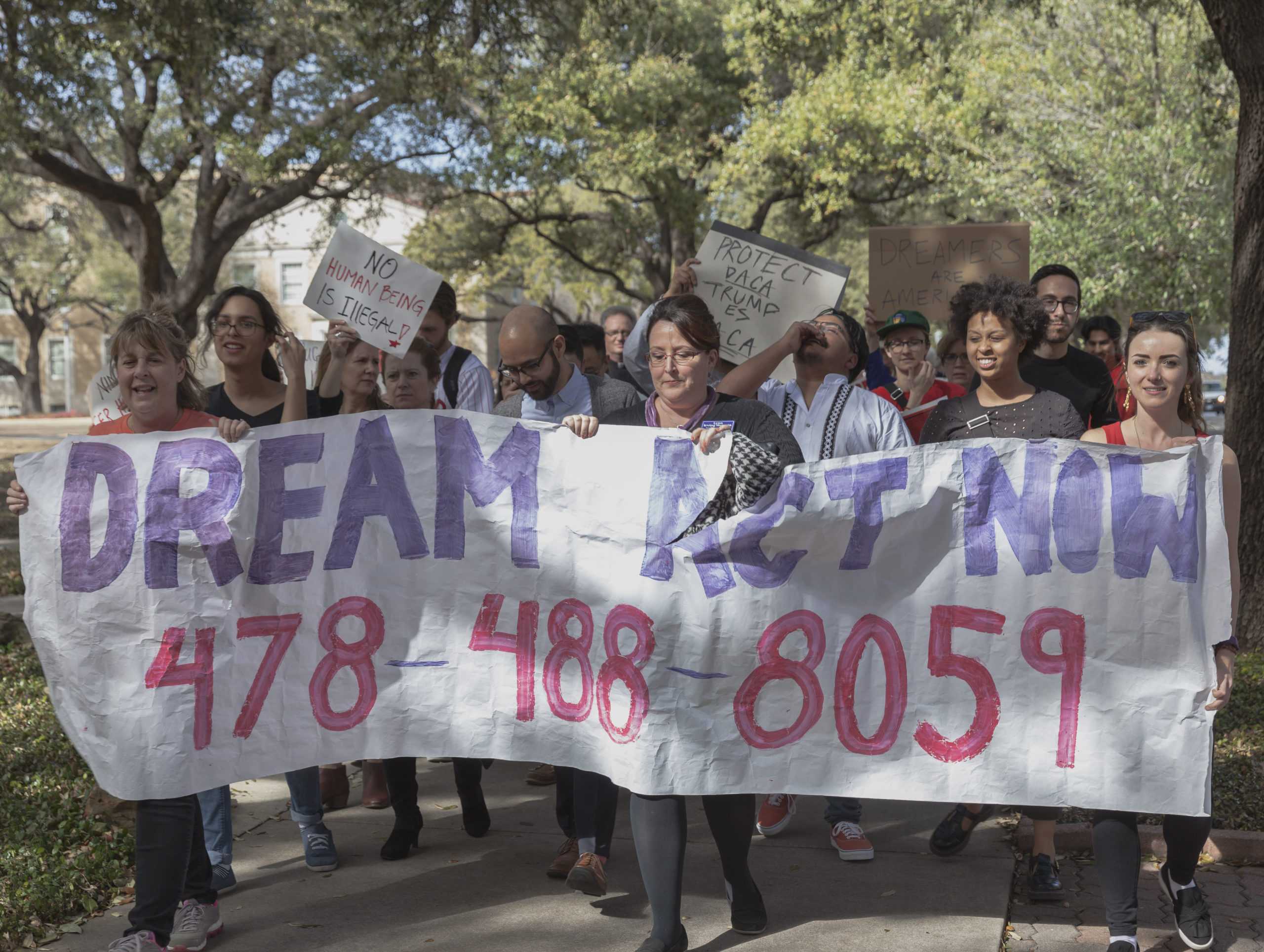 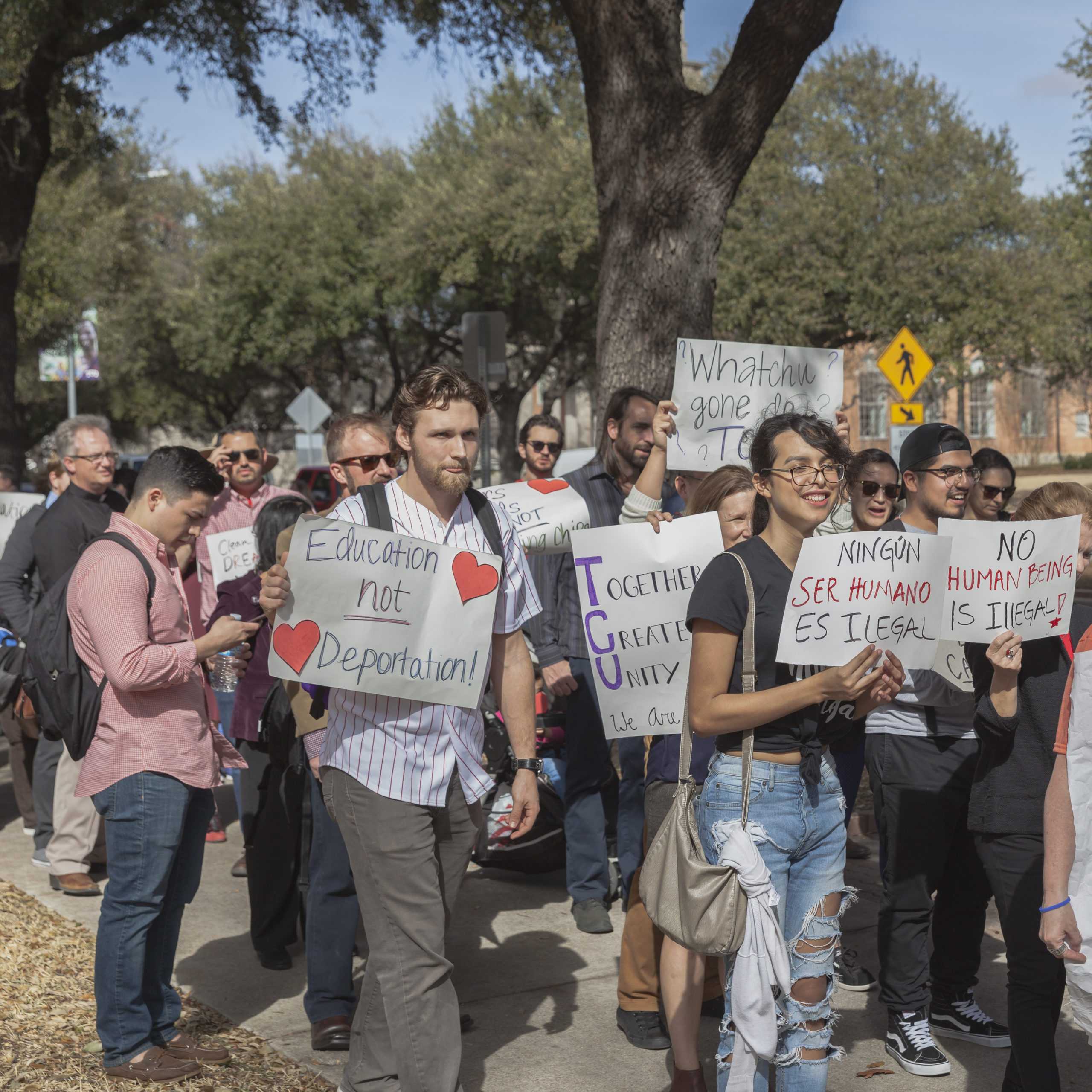 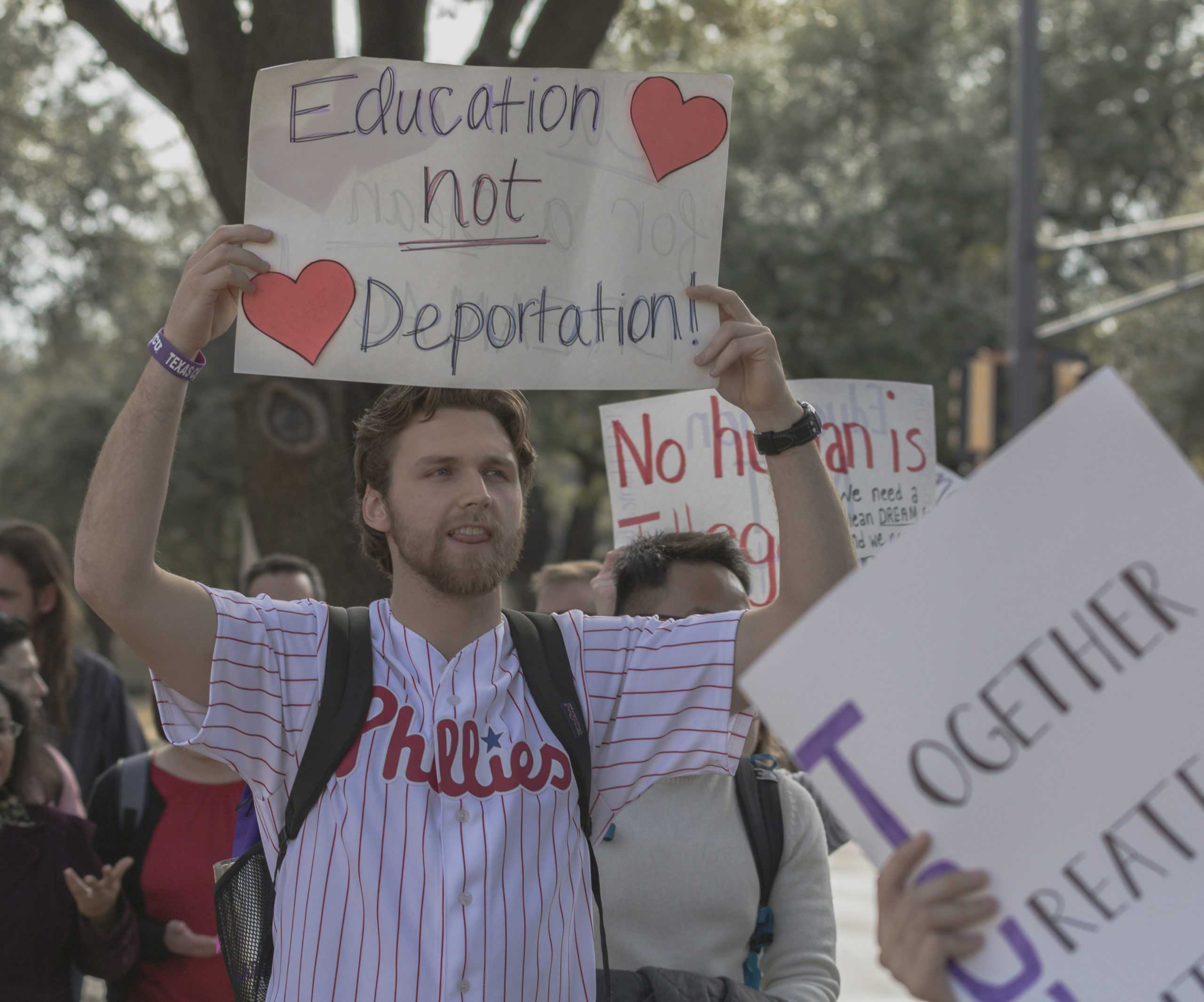 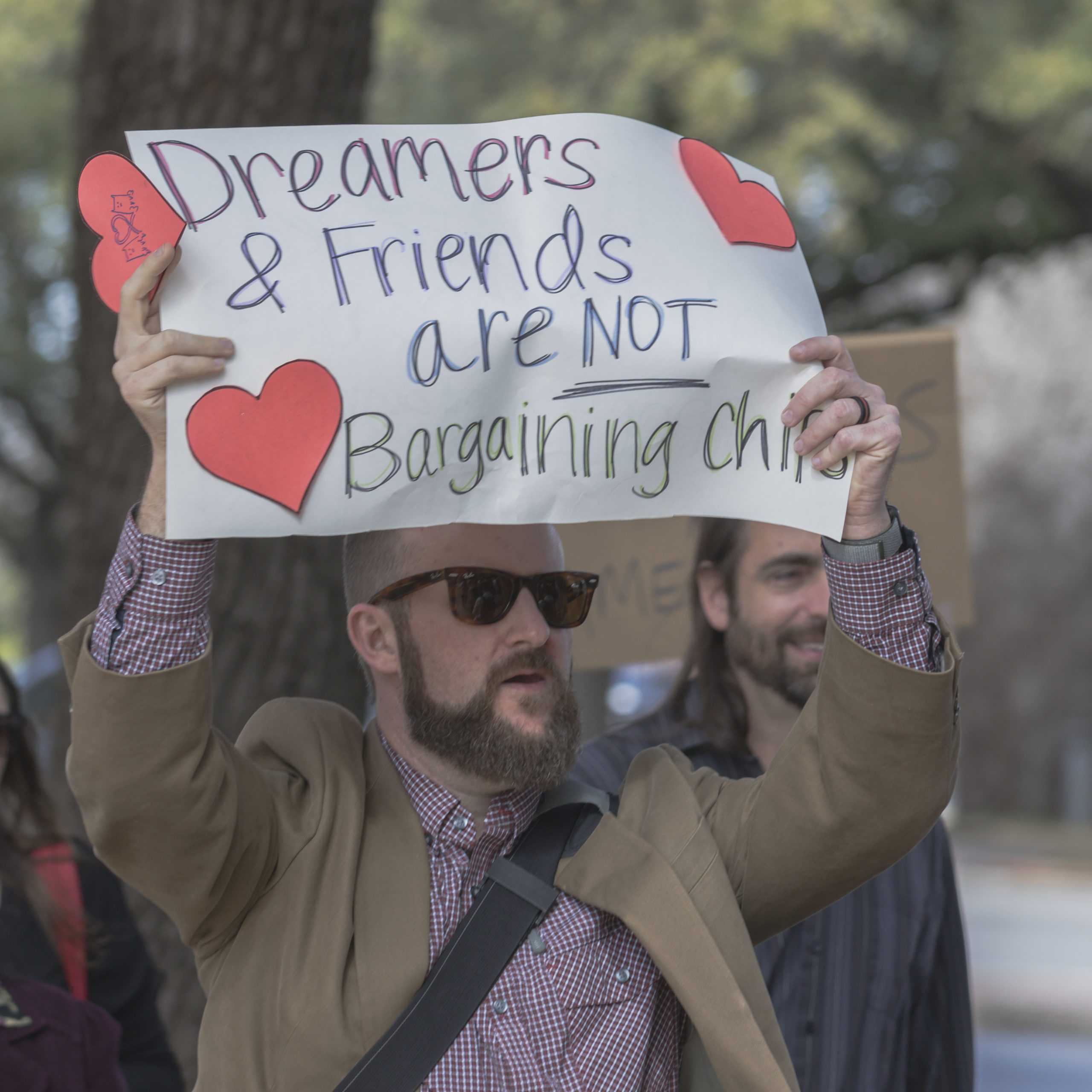 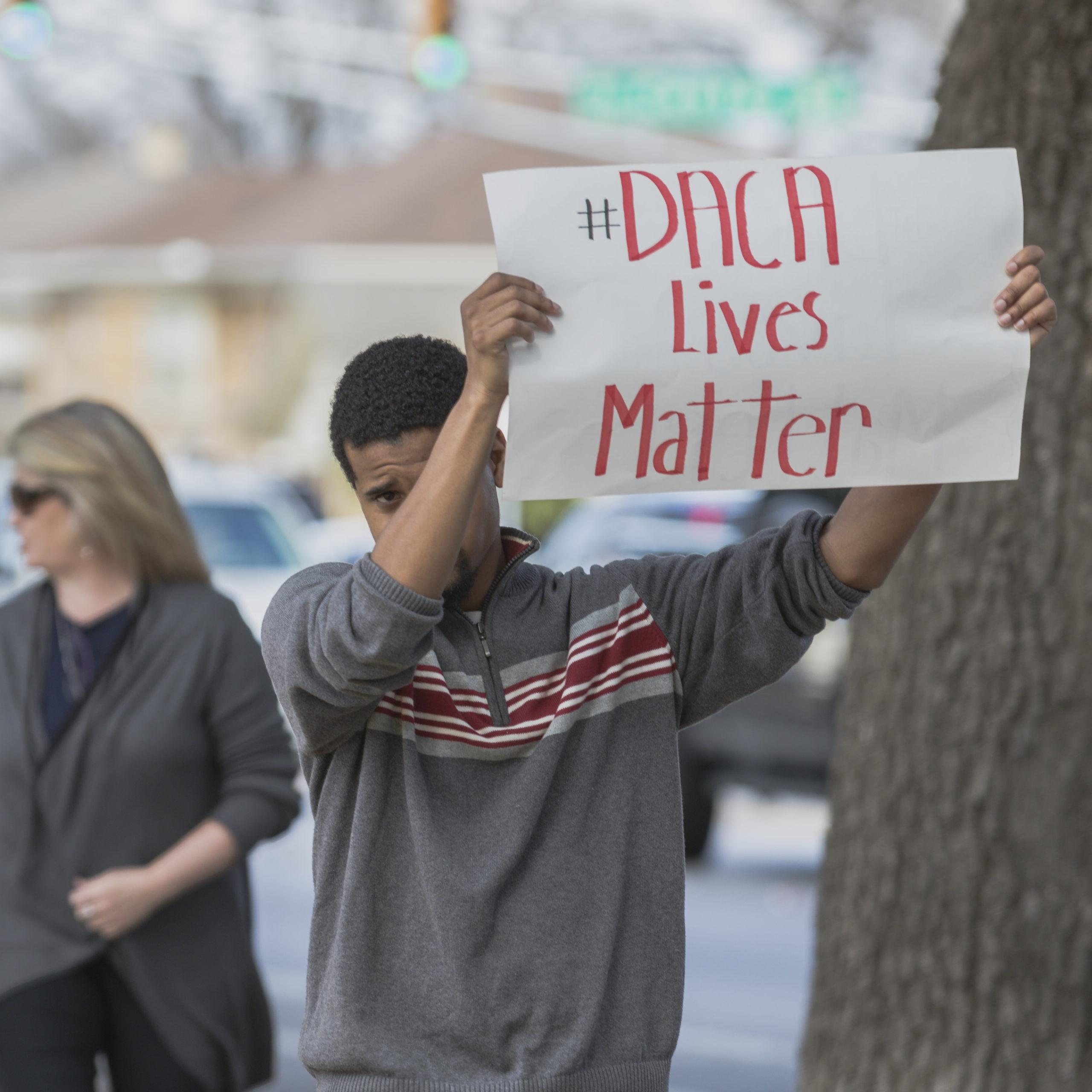 This protest comes as the Senate is having a rare open floor debate on immigration. Following last month’s government shutdown, Senate Majority Leader Mitch McConnell promised a debate for a DACA solution before the March 5 deadline. Senators have been debating policy all week in a rather chaotic attempt to get one to 60 votes.

Bills include a bill based on President Donald Trump’s demands,that focuses on creating a path to citizenship for Dreamers, securing the border, eliminating the diversity visa lottery and limiting family-based immigration; a bill from Republicans that would penalize those cities which don’t follow federal immigration policy, also known as sanctuary cities; and a Democrat-backed bill that provides a path to citizenship for DREAMers without increasing immigration enforcement funding or changing policy on future immigration (also known as the clean DREAM act, which today’s protesters were supporting).

However, there are also some bipartisan bills up for debate. Senators Lindsey Graham and Dick Durbin are still pushing their bill which would provide a legal status for those on DACA, a few billion in funding for a border wall and modify current legal immigration policy including replacing the visa lottery and legalizing parents of DACA recipients while making them ineligible for citizenship.

Senators John McCain and Chris Coons also proposed a bill. This one offers DACA recipients a path to citizenship while also authorizing a study on the needs of border enforcement and increasing resources for immigration courts.

McConnell has said the first bill to reach 60 votes wins– it will then need to be reconciled with a House version before it can be sent to the president for his signature; however, Trump aides have told reporters the president won’t sign anything that doesn’t address his desired framework which could influence some congress members votes.

This debate started months ago when Trump announced in September he was ending the DACA program. The move then was also met with protests on TCU’s campus when Guardiola organized a “Defend DACA” rally.

DACA was first implemented in 2012 by then-president Barack Obama through executive action. The program offered immigrants who meet certain eligibility requirements, known as DREAMERS, to receive a renewable two-year deferral for deportation consideration, as well as work permits.

To be eligible, individuals need to meet each of the following requirements:

Shane Battis and Paris Jones contributed to this report.

Despite projected results, key days still ahead in post-election process