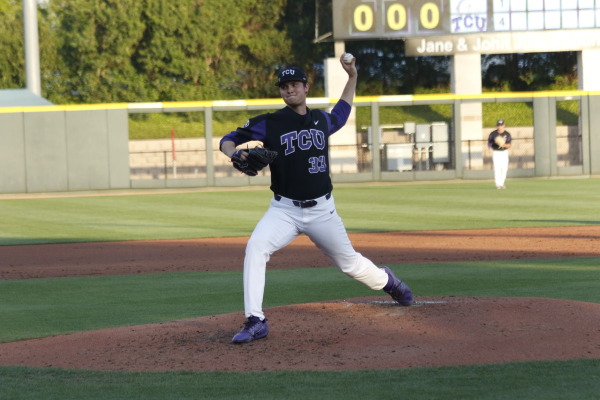 Backup catcher Colton Parish began the bottom of the first with a single which was followed by a Josh Watson walk to give them runners on first and second with no outs.

Two straight singles from Michael Landestoy and Johnny Rizer scored a run and Adam Oviedo loaded the bases for Conner Shepherd. Shepherd drew the second walk of the inning, scoring Landestoy and giving the team a 3-1 lead.

Coby Boulware would notch the team’s fourth hit of the inning, an RBI single that scored Rizer from third and grew the lead to three.

Connor Wanhanen would hit a sac-fly that gave the Horned Frogs a 5-1 lead before Parish came up to bat for the second time in the inning and flew out to end it.

The Horned Frogs would add two more runs in the fourth inning on doubles by Landestoy and Rizer. The 3-4-5 trio of those two and A.J. Balta combined for six hits and eight RBIs on the night.

“Obviously today that’s a great way to show up after losing like that at Baylor,” Landestoy said. “We come every day to play and wearing this jersey we play to win.”

The bottom of the fifth brought seven more runs after the Lumberjacks walked six of the 11 Horned Frog batters they faced in the inning. The team had just two hits in the inning.

“They walked a ton but we had some hits in there and guys got some confidence,” head coach Jim Schlossnagle said.

As the team was building its 14-1 lead after five innings, first-year pitcher Russell Smith was doing his part to ensure there was no comeback from the Lumberjacks. After surrendering a leadoff double which would eventually score in the first, he proceeded to retire 12 straight SFA hitters.

“He really pitched into those right-handed hitters well, and I think a lot of those pitches play no matter who we’re playing,” Schlossnagle said. “He had a really good changeup going too.”

Smith finished the night with six strikeouts and just one walk. He allowed a two-run home run in the sixth inning but was at his best when his offense needed him.

“We’re always going to be there to pick each other up and seeing Russ perform tonight was just awesome,” Balta said.

All nine of the team’s starters would reach base safely in the game, with eight recording a hit. The 15 runs were a season-high for the Horned Frogs. Outside of having an offensive explosion and a first-year pitcher throw his best game of the season, the best moment of the night for the Horned Frogs came with two outs in the top of the ninth.

Redshirt first-year pitcher Dion Henderson made his collegiate debut after suffering from elbow and shoulder injuries and not pitching since his senior year of high school.

Henderson entered the game and promptly recorded a strikeout to end it.

“The thing our team needed the most was the last out of the game,” Schlossnagle said. “The fact that Dion Henderson has actually pitched in a D1 baseball game is awesome.”

Henderson was rated as the 13th best prospect in the state of Michigan coming out of high school and was drafted in the 27th round by the Cincinnati Reds in 2016.

“It was just one of the best moments I’ve ever had in my career, period,” he said after his debut.

The Horned Frogs will look to continue their winning ways when they take on No. 4 Texas Tech this weekend. The first game will start at 8:00 p.m. Friday night at Lupton Stadium.