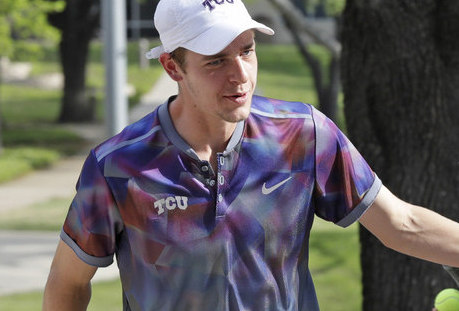 print
No. 9 TCU followed up a victory over Oklahoma Friday with a commanding 4-0 win over Oklahoma State (20-6, 2-2) Sunday afternoon.

Bertus Kruger and Reese Stalder once again got the Frogs off to a great start in doubles play with a 6-3 victory. No. 6 Guillermo Nuñez and Alex Rybakov then secured the doubles point for TCU, defeating the Cowboys’ Artur Dubinski and Leftherios Theodorou 6-2.

“We were able to get that doubles point and get on top of them right away and we never really looked back,” head coach David Roditi said.

In singles play, Stalder stayed hot with a 6-1, 6-0 win over Oklahoma State’s Luke Hammond to give TCU an early 2-0 lead in the match.

“I am proud of the way the guys bounced back from Friday and the fact that even though we had a very emotional win, we were ready to play today,” Roditi said.

TCU (16-3, 3-0) now stands alone atop the Big 12 Conference and have clinched at least a share of their third consecutive regular season conference title.